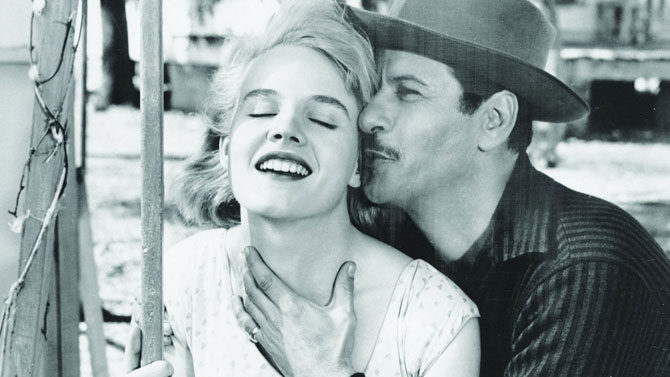 BABY DOLL (NR) Fifty-seven years after it was first theatrically released, Elia Kazan’s Baby Doll (written by Tennessee Williams) still sizzles. Sure, movies have become a lot more aggressive and overtly sexual in the last five decades—a case in point being the recent brilliant French romantic drama Blue Is the Warmest Color, which features a leave-nothing-to-the-imagination seven-minute sex scene between its two lead actresses. The scene was scandalous enough to land the movie a NC-17 rating from the MPAA and caused it to be banned from being shown in Idaho. Regardless of how explicit the scene is in Blue Is the Warmest Color, is it any more erotically charged than two of the most notorious and suggestive scenes in Baby Doll—the image of teenage nymphet Baby Doll (Carroll Baker) curled up in a child’s crib wearing a skimpy nightie and sucking her thumb while her middle-aged husband (Karl Malden) peeps at her through a keyhole? Or the scene when a venal cotton-gin owner (a Sicilian, no less), played by the fabulous Eli Wallach in his first screen role, seduces the virginal child bride Baby Doll on a swing, one of his hands suggestively kept out of frame while the other caresses her neck and face? The moment is uncomfortable, hysterical and charged with enough sexual tension to fuel countless sleepless, swelteringly hot Southern summer nights. It’s Kazan and Williams at their brazen best.

The title role made Baker a Hollywood starlet, but the real standout performances in Baby Doll come courtesy of Malden and Wallach. Malden and Kazan had worked together several times before, most notably in A Streetcar Named Desire and On the Waterfront. But it’s his turn as the painfully pent-up and unhinged Archie Lee Meighan here where Malden really lets loose. His performance is deliriously enjoyable and blackly comical, although there is a real sense of sadness running through, it as well. This is Tennessee Williams’ South, after all, and tragedy has a way of poisoning everyone’s well. Wallach does his best to steal every scene from Malden, although he’s more subdued here than in many of his subsequent roles. He’s also darkly sexy, a side of him that would never reappear on screen.

Baby Doll will be screened on 35mm for one night only (Wednesday, Dec. 4 at 8 p.m.) at Cine as part of their month-long Southern Culture on Screen series. UGA Interim Vice Provost Hugh Ruppersburg will introduce the movie.