Battle of the Larynx 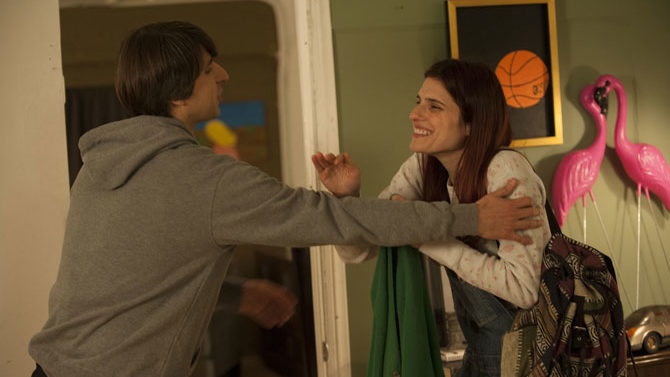 IN A WORLD… (R) The producers behind a big budget science fiction series have decided to resurrect famous voice actor Don LaFontaine’s line for promotional purposes, so the two biggest silky throats in the business, Sam Soto (Fred Melamed) and Gustav Warner (Ken Marino), are the obvious choices to nab the job. But when Sam’s struggling voice coach daughter, Carol (Lake Bell), also decides to try for the big gig, tension between father and daughter hit an all-time high.

Since the late 1970s, Hollywood studio movies haven’t exactly had a great track record when it comes to offering up a variety of roles for actresses over the age of 30. There are plenty of lovably nutty girlfriends, sexless wives and shrewish spinsters around, as well as prostitutes with hearts of gold. In recent years, kick-ass heroines with almost supernatural physicality have blown up at the box office, but despite the attempt by filmmakers to give women a chance to duke it out like their male action hero counterparts, the movies are nevertheless superficial in regards to offering viewers (who aren’t 13-year-old boys) complex representations of femininity. It is even worse if you’re a female director. But don’t tell actress/filmmaker Bell that.

Bell—best known for her television work—wrote, produced, directed and stars in this breezy, very funny and occasionally insightful comedy, peculiarly set in the world of voiceover actors like the late LaFontaine, the man who made famous the line “In a world…” in countless  movie trailers. In a World… also has some pointed things to say about women working in Hollywood and the kind of male chauvinism that permeates the industry. That Bell is able to say some much-needed things, fly her feminist flag and still keep the movie hilarious without being heavy-handed is a real pleasure to behold.

Although Bell is fantastic in the lead role and makes for an engaging presence, the real scene-stealers are the wonderful character actors she surrounds herself with, such as Demetri Martin, Ken Marino, Rob Corddry and Michaela Watkins. The standout, however, is burly honey-voiced Melamed, a veteran actor whom many will recognize from his brilliant turn as Sy Ableman in the Coen brothers’ A Serious Man.

In a World… isn’t always on track (the subplot involving Watkins and Corddry doesn’t work), but there’s a shortage of sharp, original and silly comedies out there, and it makes one anxious to see what Bell will come up with next.