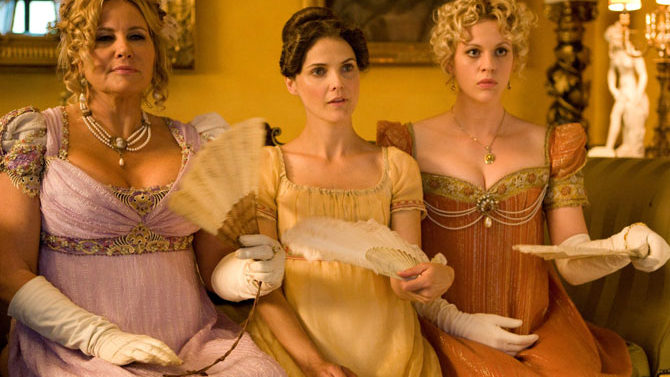 AUSTENLAND (PG-13) The premise of Austenland is comedic brilliance: A forlorn American woman, Jane Hayes (Keri Russell), decides finally to rid herself of her real-life romantic misery and plunge into full-on fantasy. She books a stay at Austenland, an expensive rural English retreat run by the calculating Mrs. Wattlesbrook (Jane Seymour), that cynically caters to lonely women yearning for their personal Mr. Darcy, hoping to indulge their love of Austen classic novels and in the process mend their broken hearts. At the airport, Jane meets a loud yet cartoonishly extravagant fellow American, Elizabeth Charming (Jennifer Coolidge), and the two immediately bond despite their very different personalities. Once at the majestic estate, Jane strikes up a flirtatious attraction to a sensitive handyman (Bret McKenzie), and the sparks fire up. Once Jane’s designated Mr. Darcy, Mr. Henry Nobley (J.J. Feild), enters the picture, however, she is forced to deal with her own starry-eyed notions of love and figure out if her ideals are compatible with the modern world. There’s one big problem: is anything that goes on in Austenland real? Or is it just one big geeky cosplay retreat for women?

Based on the novel by Shannon Hale (who also co-wrote the screenplay with first-time director Jerusha Hess), Austenland is a complete misfire as a big screen adaptation. The blame for that can be firmly placed on Hess’ shoulders. Hess previously wrote the mildly interesting cult comedies Napoleon Dynamite, Nacho Libre and Gentlemen Broncos (all directed by her husband Jared Hess). Much like her previous work, Austenland trades in awkward humorous set pieces, gender stereotypes and plentiful comedic misdirection that aims for deadpan but merely flatlines to an excruciating degree. While Russell does her best to ground her character with some semblance of sympathy and viewership identification, many of her scenes are unbalanced by a lack of directorial control. Coolidge, a voraciously hammy actress capable of utilizing her timing to great effect under better circumstances, comes on like a leaden swan here. Likewise, McKenzie, whom many will know from his work on the series Flight of the Conchords, makes for a wonderfully engaging and untraditional romantic lead for Russell, but Hess’ inability to sustain any kind of tonal harmony ultimately ruins the comedic momentum she’s gunning for.

Austenland is a mess and an unfunny one at that. Consider this one only for hardcore Jane Austen fans yearning for any kind of screen homage. Everyone else should rewatch Clueless instead.