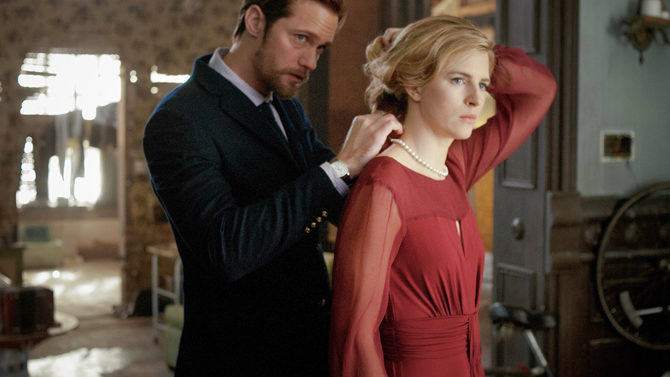 THE EAST (PG-13) A corporate private security agent who used to work for the FBI, Jane (Brit Marling), goes deep undercover to infiltrate a group of anarchist eco-terrorists called The East. The tightly-knit organization, led by the handsome, charismatic Benji (Alexander Skarsgård), targets heads of companies that have reaped blood money from the destruction of the planet through environmental disasters, dishing out some Old Testament-style punishment as retribution. Jane, a Christian, seeks to dismantle the organization from the inside posing as Sarah, reporting her findings to her ruthlessly opportunistic boss (Patricia Clarkson). But Sarah’s emotions about the group and her allegiance to the security firm become blurred as she gets to know the various members of The East better and begins to sympathize with their motives, though not always their methods.

Much like its main character, played by the emotionally placid and cautious Marling, The East never wants to burrow deep inside its subject matter. At first, the movie establishes itself as a fascinating character study of Jane’s descent into her undercover persona (albeit with an absurd and unintentionally funny scene of her dyeing her hair). But as director/co-writer Zal Batmangli and co-writer Marling (the two also collaborated on the 2011 indie Sound of My Voice) focus on The East’s various plots to exact vengeance on those personally responsible for their environmental misdeeds, the movie begins to buckle beneath the strain of its plot-heavy Hollywood clichés and illogical narrative twists. Unfortunately, it also lets the character of Sarah get lost in the narrative momentum, losing sight of her internal struggles along the way. As The East careens into its final act, abandoning its initial political complexity for patented Hollywood apolitical ambiguity, the movie flatlines until its dramatically satisfying yet politically naïve coda.

Despite The East‘s drawbacks, there is much to savor, particularly the performances by Skarsgård and Ellen Page, the latter playing one of the most fearlessly committed of the group. Page continues to develop as one of the more interesting actresses working today, generating real humanity into her otherwise underwritten character. Marling, on the other hand, is never believable as the mole. Her performance is too mannered and cold, making it difficult to invest heavily into her character’s psychological transformation. Ultimately, The East is a good effort, but the subject matter could have used a more insightful approach.