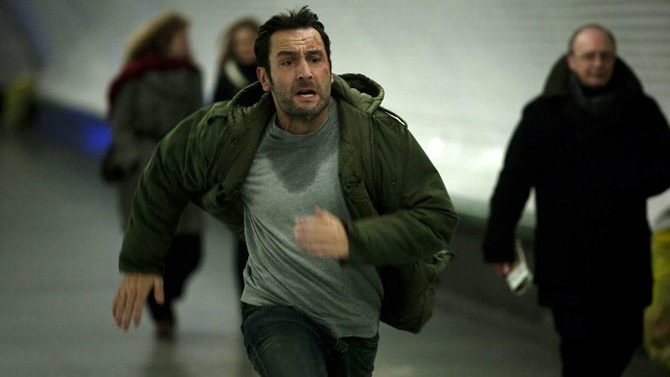 POINT BLANK (R) We used to make action movies in this country. Movies filled with clever plot twists, spatially coherent physicality and recognizable human characters with plausible motives. We live in strange cinematic times, however, and filmmakers working for the Hollywood studios seem to have lost the ability to produce this sort of picture with ease. Now, the genre is overstuffed with action vehicles resembling grotesque monster trucks rather than the mean muscle cars of yore. If you crave lean, reasonably plausible tough thrillers, it’s probably best to look beyond Hollywood, because when it comes to action, the studios are clearly only fixated on focus group-tested product filled with pixelated cartoon violence and godly superheroes who can barely fight their way out of all the textbook Freud they’re shackled with, let alone the clunky plot structures they’re imprisoned in.

In Point Blank, a mysterious patient (Roschdy Zem) is brought to the hospital unconscious after being run down by a motorcycle, and a soon-to-be-father and nurse, Samuel (Gilles Lellouche), monitors him during the night shift. The cops want to find out who the patient really is, but some thugs attempt to murder him. After Samuel’s pregnant wife, Nadia (Elena Anaya), is kidnapped, Samuel is ordered by her abductor to get the patient safely out of the hospital. With the cops and thugs chasing Samuel across Paris, he must do whatever it takes to save Nadia.

Playing in town as part of the French Cinema Series, writer-director Fred CavayÃ©’s Point Blank is the perfect antidote to its lumbering Tinseltown counterparts. Clocking in at a brisk 84 minutes, it’s ruthlessly fighting-trim in regard to narrative and almost shockingly straightforward in how it swiftly moves from one twisty plot point to the next. CavayÃ© is thoroughly diligent in delivering the genre goods and never attempts to “rise above” the material. This is unapologetic pulp fiction, the movie equivalent of a juicy beach read, but there’s no shame in that when it’s accomplished with this much craftsmanship and confidence. Point Blank also impresses with its gritty sense of place, showing a multi-ethnic Paris refreshingly removed from the postcard City of Light typically offered up. It’s encouraging to know that while Hollywood forgets the elementary particles of classic storytelling and the baseline grammar of visual literacy, filmmakers from other parts of the world will continue to show us how it’s done right.