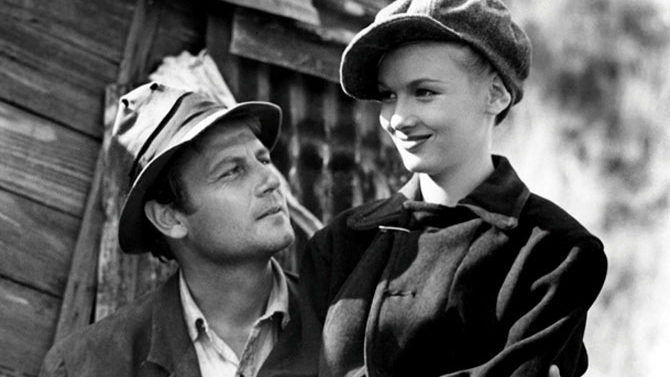 Strap In: I heard a few minutes of Sissy Spacek being interviewed on NPR last week, which was interesting since I’d just seen her for the first time in what seemed like ages in The Help. (What a depressing piece of evidence against our cultural-political zeitgeist that movie is, with its tidy, exclusively female villainsâ€”the courtly men in the Mississippi of 1963 it envisions apparently don’t want anything to do with institutional racismâ€”so easily vanquished by the stoic courage of black women, once they’re spurred to action by a conspicuously enlightened and intelligent 22-year-old white girl with moxieâ€¦ but I digress.) Sissy was talking with Terri Gross about Carrie, and I realized I probably hadn’t seen it in 20 years. So, that night, when I found myself with a couple of discretionary hours, I looked up Brian De Palma on Netflix to see if I could stream it.

This reminds me of a concern I’ve had lately, which is that as we become increasingly willing to make our spur-of-the-moment home viewing selections from the titles available for instant streaming through Netflix and other similar providers in order to avoid the once-negligible inconvenience of running out to the video store, we’re all watching the same, oddly limited set of movies. And sure, the selection of films at a given video store is itself limited by space and cost, but it’s generally curated with an attempt to be canonicalâ€”so, if we were all seeing the same stuff when that was our only option, at least there was a reasonably valid consensus that it was the important stuff. The composition of the Netflix streaming catalog reflects what is available to the company at an affordable cost far more than what anyone thinks is actually valuable to watch, and that doesn’t seem likely to change anytime soon. The thing to remind ourselves, I guess, is that watching films intentionally doesn’t take significantly more effort than settling for what’s put in front of us.

Of course, I didn’t take that wisdom to heart last week. With Carrie unavailable, I decided to watch De Palma’s next film about telekinetic teenagers, 1978’s The Fury. I’m the first to acknowledge the shakiness of De Palma’s claim to legitimate auteur status; his overripe pastiches and homages are at least as often offensively idiotic desecrations (Scarface) as guiltless pleasures (Blow Out). The Fury is an example of the latter strain in his career: a briskly enjoyable riff on Hitchcock (not to mention Argento’s supernatural gialli) with Kirk Douglas hamming it up as a man who knows too much and John Williams bombastically aping Bernard Herrmann (an impersonation Williams had practiced a couple of years earlier with his score for Hitchcock’s final film, Family Plot). There’s also plenty of creative use of rear-projection, including a beautifully satisfying clairvoyant hallucination sequence with a swirling camera on a grand staircase, which may be De Palma’s most justified and best integrated appropriation of the master’s style in a career that has contained no shortage of them.

Love of Film: So, the great Preston Sturges’ Sullivan’s Travels is screening at CinÃ© in a rare 35mm print next Thursday, May 17, to wrap up For the Love of Cinema, the downtown art house’s fifth anniversary series. If you’ve never seen it, you’ve just got to go; even if you have, the chance to watch a 35mm print with an audience is not to be missed. There’s also a free, members-only reception catered by The National at 6 p.m., before the 7:30 screeningâ€¦ Speaking of member perks, there’s a really fun one coming up Saturday, May 19. At 11 a.m. in the CinÃ©Lab, UGA Film Studies Professor Richard Neupert will present a selection of classic 16mm animated shorts from various studios, and discuss what makes them special and different from one another. It’ll be appropriate to bring the kids, though by no means necessary. It’s free, but again, you have to be a member. If you’re not already, go ahead and sign up now at www.athenscine.com. Membership feesâ€”and other contributions to AFAI, the nonprofit that operates CinÃ©â€”are tax-deductible.

Write Now: It’s short notice, but CinÃ© is hosting a six-week Intro to Screenwriting Workshop beginning this Saturday, May 12. This is the kind of thing that hasn’t happened much at CinÃ© in the past, but should become more and more a part of its function. The course costs $175 ($160 for CinÃ© members) and is taught by my friend Allie Goolrick, who is smart, fun and really well qualified. You can get more details, including a syllabus, at www.athenscine.com.