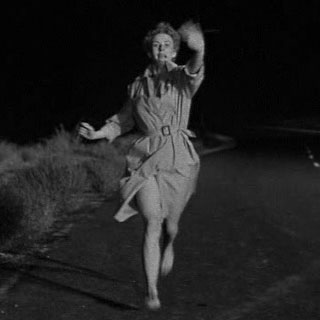 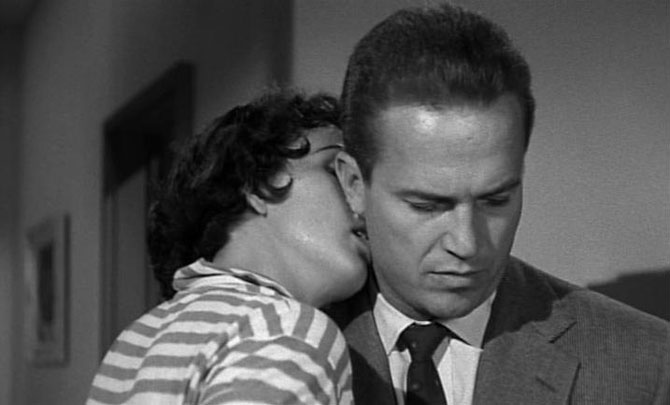 A restored 35mm print of Robert Aldrich’s 1955 Kiss Me Deadly will be screened Wednesday, Jan. 25 at CinÃ©.

Hawks on Hawks: Last Wednesday evening saw the opening of CinÃ©’s Classic Film Noir Series with The Big Sleep, Howard Hawks’ zippy 1946 Raymond Chandler adaptation, which I had the pleasure of introducing. In preparation for that, I’d been doing a lot of reading and thinking about the director, a key member of Andrew Sarris’ “pantheon” of Hollywood auteurs whose bodies of work, wrote the critic and theorist in 1968, each “evoke a self-contained world with its own laws and landscapes.” That’s as true of Hawks as it has ever been of any director: his universe is a consistent one in which behavior and attitudes are guided by rigorous professional codes, and in which the bonds of friendship, love and, crucially for both, respect can only be formed through conflictâ€”the proving of worth by tests of skill or moral fiber in Hawks’ adventure films or, in the comedies, the dismantling of a man’s codes of behavior by a woman.

Hawks is the first filmmaker whose career I investigated in great depth, thanks in large part to my stumbling across Robin Wood’s seminal monograph while in my late teens. I saw about two dozen Hawks films in about two years, but one that eluded me then, and for years after, was 1965’s Red Line 7000â€”his third-to-lastâ€”for which Wood makes a lengthy, impassioned case, calling it perhaps “the most underrated film of the sixties.” I’d noticed a few weeks ago that Netflix has made it available for streaming, so I watched it, for the first time, the night after The Big Sleep.

Before I give the impression that I want you all to sit down and watch it as a brilliant example of the work of one of America’s greatest directors, I should make clear that the film has that peculiar sense of datedness one sometimes finds in the late-career work of directors who, having formed a personal vision in the studio era, now find themselves casting it against a physical and cultural backdrop with which it fits strangely. Think of Hitchcock’s Frenzy, Sam Fuller’s White Dog or Billy Wilder’s Avanti!â€”each an artistically successful expression (or even extension) of its director’s personal worldview that is nonetheless oddly hard to watch because of its strained relationship to its concrete setting.

Even given that, though, it’s easy to see why Wood finds Red Line 7000 so compelling: its story of the relationships and rivalries that play out amid a group of men and women over a season on the NASCAR stock-car-racing circuit holds a virtual compendium of Hawks’ favorite dynamics. The bold, independent characters chart and navigate their own and one another’s hidden weaknesses and insecurities, teasing and fighting and shoring each other up while danger and death hover over everything. There’s even a recycling of the great climactic challenge of the Hawksian heroines of To Have and Have Not and Rio Bravo to their reticent lovers, essentially: “I’m hard to getâ€”you have to ask me.” And while this isn’t a masterpiece on the level of those two films, it’s far from a disappointmentâ€”even after a 25-year wait.

Next Up: After that screening of The Big Sleep, I had a chat with Flagpole film reviewer Derek Hill about the strong possibility that we are witnessing the actual twilight, after only a little over 100 years, of film projection in theatrical exhibition. I don’t know why, but I don’t think I’d ever considered, out loud, that students reading about 35mm prints and reel-to-reel projectors in 20 yearsâ€”or 200, if we last that longâ€”might find those as quaint and alien as a fossil fuel-burning engine (hey, we’re optimists in this column). But as we’ve discussed on many occasions, the transition to digital projection is almost completeâ€”here in Athens, Beechwood and Carmike no longer project film; the Georgia Square Mall 5 does, but will probably change over this year.

And of course, CinÃ© still does, and will presumably continue to for as long as it’s viable. One way that might work is for local audiences to show a sustained interest in repertory screenings of restored and archival prints of older filmsâ€”and the sold-out audience for The Big Sleep was reason to imagine that they could. CinÃ© has added second screenings for the remaining two films in the Noir Series, so you should all have the opportunity to see the great print of Robert Aldrich’s amazing and deeply strange 1955 Mickey Spillane adaptation Kiss Me Deadly at either 7:30 of 9:45 this Wednesday, Jan. 25. Chris Sieving will introduce the early show, as his colleague on the UGA Film Studies faculty, Antje Ascheid, will for Billy Wilder’s canonical Double Indemnity Feb. 1. Check www.athenscine.com for showtimes on that one.

Back in Action: With a new semester well underway at UGA, the ICE-Vision series has returned to the Lamar Dodd School of Art. Jan. 26 is Nicolas Roeg’s Don’t Look Now, which may have a more pervasive atmosphere of creeping dread than any other movie I know. The Feb. 2 screening looks like it will be God Grew Tired of Us, a documentary on three former child soldiers of Sudan who come to the United States in search of refuge, presented in conjunction with the campus anti-poverty organization Nourish International. Screenings are Thursdays at 8 p.m. in Room S150 of the art schoolâ€”find ICE-Vision on Facebook for more info.

Breaking News: The Athens Film Arts Institute has hired an executive director for CinÃ©. Gabe Wardell, who will officially come on board at the newly nonprofit cinema Feb. 1, was the director of the Atlanta Film Festival from 2006â€“2010, and has a long background in festival and arthouse programming as well as nonprofit management and fundraising. We’ll have more on Wardell and his plans for CinÃ© in next week’s Flagpole, but in the meantime let’s welcome him and wish him the best of success in his new gig.