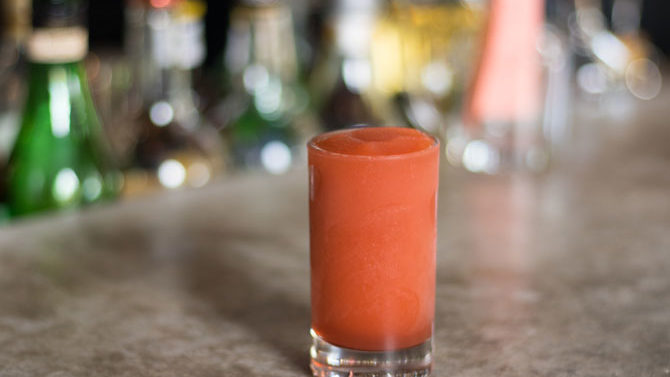 At Seabear Oyster Bar, a glittering mosaic of liquor and liqueur bottles line four long shelves stretching across the back wall. But the pièce de résistance is the small machine churning a bright orange slush. The sign reads, “Frozen Negroni.”

“There are people who ask, ‘What’s a Negroni? Can I have one of those [frozen] Negronis?’” says Hunt Revell, who runs the bar program at Seabear. “These days, I’m like, ‘Let me let you taste it first,’ because it’s not a sweet, syrupy frozen drink.”

A Negroni—equal parts gin, red vermouth and Campari—is a classic cocktail, he’ll explain. It’s bitter and herbal, and it’s an acquired taste. Yet for every person Revell is introducing to the cocktail, that many more are coming in to request a Negroni or another craft cocktail.

“We have a full rotating menu of cocktails, and people are ordering them all. We’ve got 20 or 30 options they can get, and specialty drinks, and they’re ordering them,” says Revell, who admits to not knowing anything about a decent cocktail when he came to Athens for school in 2002.

So, how did a cheap-beer and sour-mix-loving college town come to embrace and support a craft cocktail scene? “The cocktail moment’s been bubbling up for about 15 years now,” says Jerry Slater, a veteran of the restaurant industry who wrote the recently published Southern Foodways Alliance Guide to Cocktails. In Athens, the renaissance took root in restaurants like Five & Ten and The National, he says. As customers gained a taste for locally inspired menus made with care, the demand for high-quality beverages began to follow.

Revell got his start 10 years ago bussing tables at Five & Ten. “There were cocktails on the menu then. There were bartenders there making unique drinks or researching old drinks,” he says. “I remember learning about a daiquiri, like, this is good drink? That’s just a silly, frou-frou thing, right? No, these were classic drinks meant to be enjoyed slowly, with good ingredients.”

Cocktails had a golden age from 1880 to around 1910, says Slater. “Bartenders were considered craftsmen. On the same block, you would have your cobbler, your tailor and your bartender, who knew exactly what you wanted to drink. It was a respected trade,” he says.

Then America “shot itself in the foot” with Prohibition, which launched America into what Slater calls the dark ages, when engineered pre-mixes became the norm. “People now are demanding real juices, not sour mixes,” he says, and bartenders are going back to pre-Prohibition era recipe books to rediscover the classic cocktails from the golden era.

Matt McFerron was inspired to open The Old Pal in Normaltown in 2013 after living in New York City and New Orleans. “I saw that a neighborhood bar was part of the identity of a lot of neighborhoods in those cities, and in particular, I not only saw the craft beer scene take off, but craft cocktails as well,” he says.

The Old Pal offers a menu of handmade cocktails using high-quality ingredients. Since opening, McFerron has noticed that more new faces are coming into the bar. That’s encouraging, he says, because he knows that cocktails can be intimidating, and many of his customers are still getting to know their way around them. “If you look at all these bottles on the back bar, if you’ve never tried them before, I can see how it could be daunting,” he says. The Old Pal offers a less expensive, starter cocktail menu featuring ingredients customers are more likely to be familiar with in the hopes of helping them branch out.

“We try not to force anything on people that they’re not comfortable with or don’t want,” McFerron says. Revell and Slater agree. The most important thing is to meet people where they are, they say.

Once a customer trusts you, says Slater, then you can start suggesting options outside their comfort zone. Like the transition from drinking flavored lattes to black coffee, there are “stages of connoisseurship” for cocktails, too, he says. “Those cocktails can be very flavorful, and sometimes people aren’t used to that. You have to evolve.”

McFerron is optimistic that more Athenians will come around to craft cocktails in time. Already, he’s seeing more cocktail events pop up around town, and he’s not too surprised. “For a small Southern college town, it is open-minded, and people here are willing to try new things.”