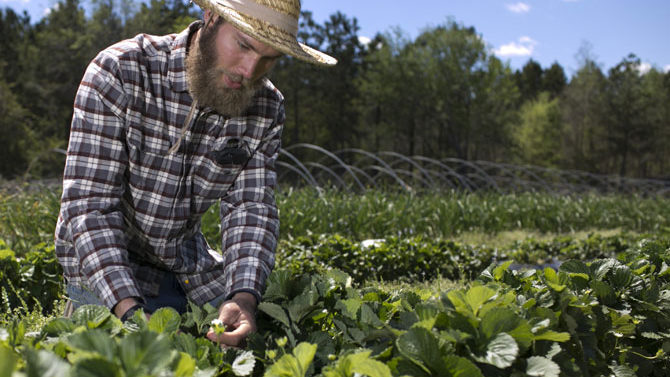 When the thermometer hit 29 degrees recently following a streak of warm and sunny days, most of us around Athens were grumbling to each other about how finicky the weather can be, how just when you thought it was safe to pull out sandals and shorts, we’re hit with one more wintery blast. For our local farmers, however, the conversation about unpredictable weather is a more serious one.

Spring, it seemed, had come early. Very early. That, coupled with an unexpected cold snap, will affect the timing and variety of produce we see at our local markets and restaurants, as well as profits for our local farmers. These unusual conditions can tempt farmers to deviate from the usual planting schedule.

Typically, farms won’t plant spring annuals until after mid-April, when it’s safe to assume that the last frost has come and gone. In a recent message to Collective Harvest CSA members, Eva Farfour of Full Moon Farms likened farming to gambling. Though experience tells her to wait and not plant early, “the familiar signs of spring [are] awakening the gambler in me, the risk taker,” she wrote. The payoff is an early harvest of fan favorites.

Having the first tomatoes at the spring market is one way farmers can attract people to their stands, Collective Harvest Manager Rachel Waldron says. “You want to be able to have the first items of the season change, because that’s what really excites people,” she adds. “They’re often not as excited about the items they’ve seen for weeks and weeks.” Being able to offer a variety of produce earlier in the season boosts interest in CSA memberships, too, says Waldron.

Of course, sometimes the gamble doesn’t pay off, as with any business. Even a carefully planned and budgeted season can go awry because farmers can only do so much to control production. Weather, disease and pests all impact crop yields. It’s for that reason that local farmers diversify, says Hickory Hill Farm owner Susan Shaw. “We do not bank on one or two crops, or one or two income streams to meet our income needs, no matter how successful a crop or income stream has been in the past,” she said.

The spring-like weather prompted some crops to begin to sprout or flower, only to be cut down when freezing temperatures returned. Shaw’s asparagus suffered. “Every one that poked its little head out of the ground for three days died, and then the following week we’ve not seen one single asparagus emerge,” she said.

Some of Farfour’s more established crops—tomatoes, squash and cucumbers—survived the cold snap, protected under row cover in a hoophouse. Younger crops didn’t fare as well. “I have radishes that didn’t germinate and lettuce that is growing a lot slower than normal,” she says. “The cold definitely slowed down growth, but this coming weeks warmth should make up for that.”

Like most Georgia farmers, her blueberries took a hit. State Agriculture Commissioner Gary Black toured the state’s blueberry crops in mid-March, returning with a grim report for South Georgia’s crops. As much as 80 percent was wiped out in the freeze.

Though crops should bounce back, a delay in their harvest can translate to smaller profits at the farmers market. If seasonal items come in late, that means more competition. “Generally, if you can bring a crop to market first, you are likely to sell out, but if you come later in the season, you might be taking it home because the market is flushed,” says Farfour.

Ultimately, the warm weather will support a speedy recovery of market staples (so you won’t be without kale for long), but you may see some variability in how early or late certain items are available. Strawberries, for one, are likely to hit the markets earlier this season, and are sure to be plentiful.

You won’t have to wait long to see the spread for yourself. The Athens Farmers Market is already open, and the West Broad Market Garden opens Saturday, Apr. 29. Collective Harvest’s spring share began Apr. 11.