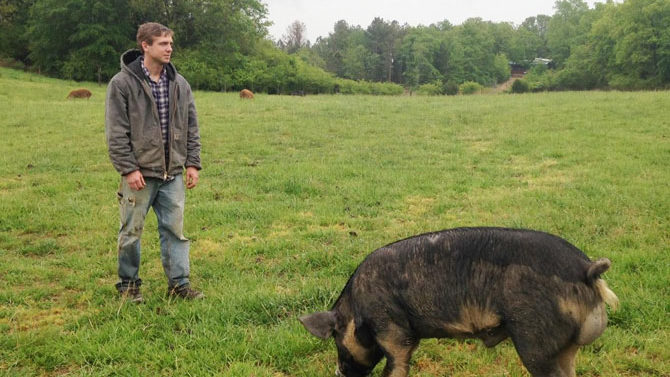 Benji Anderson’s pigs roam bright green fields that cover much of the 48 acres on Anderson Farms in nearby Madison County. In one pasture, a full-grown, 300-pound sow idly grazes on grass. In another, younger pigs root in the dirt and occasionally saunter to a metal trough where they munch corn and soybean feed. Pigs are famously omnivorous, and these also eat nuts, vetch, even bugs.

What they don’t eat are antibiotics.

Antibiotics have been widely used to promote rapid weight gain in livestock since the 1950s, and in 2014, the FDA estimated that 62 percent of all antibiotics are sold for agricultural use. Consumers, however, are increasingly upset about this practice, and they’re using their purchasing power to protest.

The evidence is clear now that routinely dosing livestock with the same antibiotics doctors use to treat infections in people has contributed to the evolution of antibiotic-resistant bacteria. Each year, “22,000 people in the United States die today because the antibiotics didn’t work,” says Jonathan Kaplan.

Pushing to reduce the use of antibiotics as agricultural growth promoters is part of Kaplan’s job at the Natural Resources Defense Council, where he leads the food and agriculture program. Although his organization has had success galvanizing governmental bodies into revisiting antibiotic regulation, he says the main arbiter of change has been the consumer. Consumer demand for antibiotic-free chicken has driven Tyson, Perdue and other giant producers to change their practices, and more and more restaurants advertise drug-free birds. The pork industry, says Kaplan, is starting to feel that same pressure, but the transition away from antibiotics will be a struggle for industrial-scale hog farms.

Georgia’s pork farmers won’t feel the pressure as keenly as a farmer in the Midwest, says Robert Dove, an animal scientist and swine-feed expert at UGA. “We don’t have a lot of disease issues or disease pressure because we don’t have a bunch of pigs all congregated together,” Dove says.

Compared to 11 million pigs in Iowa, Georgia has a scant 30,000. Many of the hog farms in the state are small, with fewer than 50 animals at any one time. Anderson Farms is not only small, but also raises pigs in pastures instead of confined in pens. Grazing pigs is a traditional method that represents only a tiny slice of today’s pork market.

Hogs raised this way are generally very healthy, and Anderson says he has a sick pig about twice a year. When this happens, he doesn’t hesitate to use an antibiotic if that is likely to help. But he never gives antibiotics to promote weight gain or growth, and he won’t sell any pig given antibiotics under the Anderson Farms label.

Disease, he says, is a far greater concern for a conventional hog farm where as many as 5,000 animals are confined on one acre. Hogs are “just like people,” Anderson says. “If lots of people are jammed in together, disease spreads.”

Most of the pork products Americans buy come from conventional, factory-style farms somewhere in the Midwest. Hogs are raised in barns with concrete floors to reduce exposure to disease-causing organisms. At the same time, they’re packed together to keep production costs low.

Antibiotics aren’t likely to disappear from pork production, says UGA’s Dove, but the industry is scaling back their use as growth stimulators. “From a growth-promoting standpoint, I think we’ll come very close,” Dove says. “We still have to use antibiotics to treat illness.”

New federal regulations that prohibit the use of medically important antibiotics as growth promoters go into effect on Jan. 1, 2017. Supposedly, these new Food and Drug Administration rules will ensure that antibiotics will only be used to treat disease. Kaplan isn’t confident that the FDA guidelines will have much impact, though. “A lot of the drugs that are approved by the FDA are approved for both growth promotion and disease prevention,” he cautions. In effect, producers can continue using the same drugs in the same doses—so long as they say the purpose is treating infection.

Anderson doesn’t believe antibiotic use is a given. “Of course hogs can be raised without antibiotics,” he says. Herds can be managed in ways that promote healthier pigs.

Anderson recognizes that his experience as a small-scale farmer doesn’t hold all the answers for the pork industry, but he hopes the larger farms can learn from throwback farms like his. “The pendulum seems to be starting to swing back for the hog industry,” he says. “So we need to keep that momentum going.”