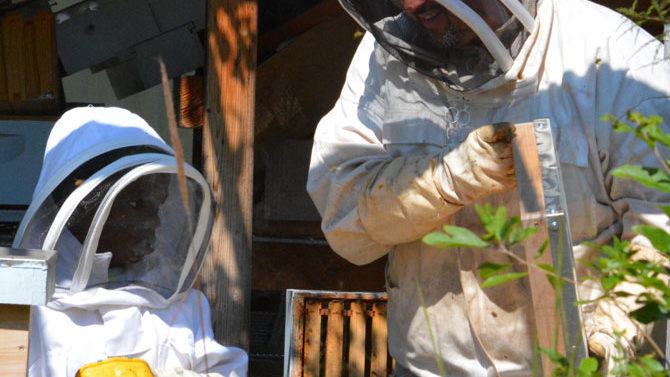 Dan Long doesn’t mind stepping into a swarm of irritated bees. In fact, he likes it. Long is a veteran beekeeper and one of around 100 fellow beekeeping geeks (or “beeks” as some like to call themselves) devoted to the apiary arts in Athens and the surrounding area. And their numbers are growing.

Georgia boasts over 30 beekeeping clubs across the state, and two of them are in our backyard. Beekeepers range from hobbyists to professionals like Dan Harris, whose Booger Hill Bee Co. is a mainstay at the Athens Farmers Market. But most club members just like raising bees.

Long says foremost beekeeping is a fun hobby. “There’s a combination of carpentry and meteorology, animal husbandry of a sort,” he says. And being surrounded by a swarm of bees is a little, well, intimidating to a lot of us, which Long says gives beekeeping a kind of “mystique.” The increased interest in beekeeping, he thinks, stems from people wanting to grow their own foods, or at least know who’s growing them.

Getting started is straightforward. Step one: Build your hive box. Step two: Get your bees. Honey bees are often sold in packages called “nucs.” A package is a three-pound box of bees and a queen. A nuc—or nucleus—is like a hive starter kit, complete with worker bees, drones, a queen and some brood (larvae). The next step is the hardest—helping the hive thrive.

For help, the novice or veteran beekeeper can look to local clubs for support. The Eastern Piedmont Beekeepers Association gets together about once a month to hear guest speakers or swap tips and techniques. A common guest at their club is Jennifer Berry, lab manager for the UGA Honey Bee Program.

Berry and program head Keith Delaplane take turns visiting clubs across the country, educating keepers on the latest bee buzz. The program’s website houses a wealth of knowledge about raising honey bees, and every May UGA puts on an intensive bee institute at Young Harris College.

The new interest about bees isn’t lost on Berry, who has been with the program and working with beekeepers for 16 years. She thinks the media coverage of declining bee populations has something to do with it. “You couldn’t turn on the TV or open a magazine and not see [or] hear something about bees dying,” she says. Once the public learned more about bees, she says, they started to seem less scary. “So then they think, ‘Hmmm, why not have a hive in the back yard? We can help the bees, have a cool hobby, and we might even make some honey!’”

Making honey in Athens, though, takes work. It turns out Georgia is a tricky place to raise bees. Honey bees are not native to the U.S., and our climate, pests and native flora aren’t ideal for easy living. “Here, especially in the piedmont of North Georgia, we have a real dearth of nectar and pollen, but the temperatures are warm enough that they’re active when we’d really like them to not be active,” says Long.

This fall was especially warm, so bees were foraging for nectar when food wasn’t around. That’s a problem, says Long, because it leaves the bees tired and malnourished. Over the winter, Long occasionally feeds his hive cane sugar syrup until Georgia’s natural nectar flow returns in March.

But all the hardship is worth it for the golden prize at harvest time: honey. Consumers have their pick of local honey varietals that, much like wine, carry the flavor of the land the hives sit on. Sourwood honey from Blue Ridge is an especially popular varietal among local taste buds.

Long says he’s noticed more consumers asking for local honey for several reasons, including the “support local” movement and a distrust of factory foods. “I think if you know your farmer, you know your beekeeper, you look ‘em in the eye, then you trust them more than some anonymous company,” he says.

Hungry for honey in January? A lot of hobby beekeepers sell their wares online. Check out the Eastern Piedmont Beekeepers Association and Oglethorpe County Bee Club websites to get connected.