Big Changes Are Coming to Taste of Athens 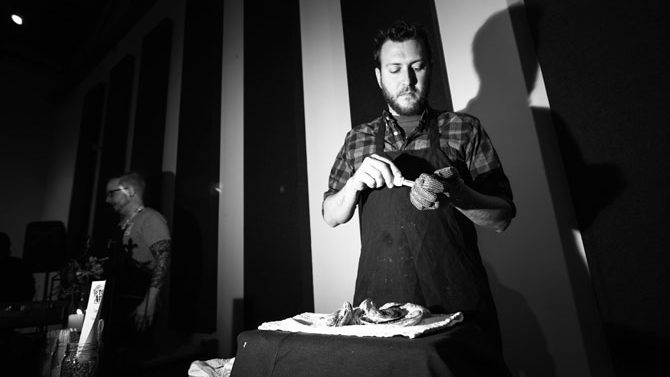 Last year, Taste of Athens packed 2000 people into the Classic Center’s massive exhibit hall to taste food prepared by 42 different chefs. Although the annual fundraiser succeeded in raising money for the nonprofit Community Connection, it didn’t do all that it could to serve every person involved.

“You put 2,000 people in a room, it’s going to be an issue, no matter how big the room is,” says Fenwick Broyard, the executive director of Community Connection. “For a restaurant of any size, really, that’s a lot of product to bring and a lot of hustle and bustle to contend with.”

That’s what the folks at Community Connection are trying to change this year. With a newly chef-centered approach to the event, Rachel Bailey and Fenwick Broyard are doing all they can to see to it that Taste of Athens facilitates the kind of experience that makes each interaction worth savoring. They want to create an event where the most sought-out chefs in Athens are glad to be a part. “Over time, there had been this sort of gradual attrition, where restaurants started pulling out,” says Broyard. “To me, that just seemed unacceptable.”

Broyard and Bailey [a Flagpole contributor] began this overhaul by asking past participants, restaurateurs and guests what the experience of the event had been like in years past. From this assessment, they plotted to make next year’s Feb. 22 event different.

Rather than the massive crowds previously in attendance, they’ve scaled ticket sales down to 750 people, moved the event into the smaller Classic Center atrium and cut the number of participating chefs in half, from 42 to 21. They hope the change in size will improve the interactions that people will have with each person who hands them a taste of his or her restaurant, that they might lay the foundation for a lasting impression of what each restaurant has to offer.

“For us, it’s relationship-building,” says Broyard. “Food is the ultimate driver of it. Unlike anything else, food brings community together on its own, and given that that’s the goal of our organization, it makes sense that our event would do that.”

Bailey and Broyard have also made a commitment to contact media outside Athens to help draw visitors to town for the event. This will, in turn, bring more opportunities for Athens businesses to reap the benefits.

As an added layer, sommelier Steven Grubbs and fellow wine guru Stephen James will help prepare wine pairings to enhance the festival experience. Restaurants will be grouped according to the wines that fit their offerings.

And that’s not the only new addition in terms of alcohol. Toast of Athens will premiere as a supplementary experience to the main event. Toast will feature a signature cocktail from eight local bars, competing for the title of Athens’ best cocktail, to be judged by a panel of mixology experts and to be tasted by anyone who buys a ticket either to Toast alone or as a package deal with Taste, happening simultaneously in the same building.

Prices range from $30 for the early-bird Toast tickets to $75 for the Toast/Taste bundle and are available at communityconnection211.org.

“We recognized that Taste of Athens tickets are prohibitively expensive for some people and even some people who work at restaurants that are participating in Taste, so we wanted to figure out how to include them in this event in a way that they felt like they were a part of it,” says Broyard. And Toast will include hors d’oeuvres, which has enabled several restaurants without the capacity to feed 750 people the option to partake on a smaller scale. “It always comes back to that question that we’re asking ourselves and each other all the time, which is how can we do the most good for the most people,” says Bailey.

Broyard and Bailey believe that changes to Taste of Athens can have major impacts on the city of Athens as a whole, but they know that they can’t make it happen alone. “We’re asking people to invest in that process, and the return is an economic benefit for all of the community,” says Broyard. “As our event grows, Athens gets better; Athens gets benefits. We’re one of the few nonprofits that can boast that about its annual fundraiser. If we can get people to support us in growing this event, everybody wins.”