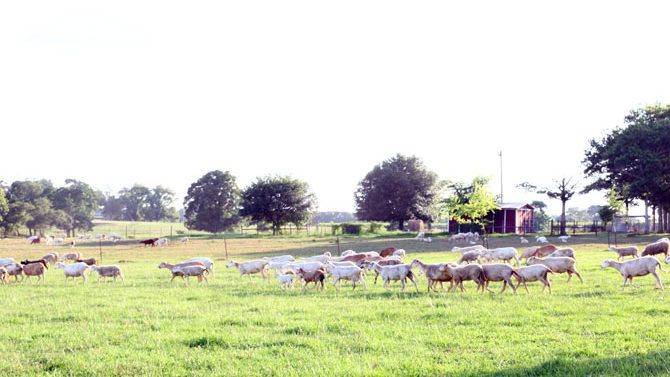 So you say you want to know where your food comes from. White Oak Pastures is among many farms happy to make that dream a reality, as agrotourism catches on throughout the state.

White Oak Pastures has been in the Harris family for more than 150 years. Passed down through five generations, the farm spent most of its history producing only cattle. Today, the farm sprawls over 2,500 acres (most owned, some leased) with 10 species of animals and organic produce flourishing in the tiny town of Bluffton, about 40 miles west of Albany.

White Oak Pastures is a name worth knowing for many reasons. It’s the largest organic farm in our state, one of the most prominent sustainable and humane animal producers in the country and the only farm in the nation that has USDA approved abattoirs on the premises to process the animals they raise. But they’re interested in more than just keeping the animals healthy and happy; they’ve created a noteworthy work culture for the people employed by the farm.

The majority of people who live in Bluffton work at White Oak Pastures—it’s a large number of employees for a farm, but a small number of people for a town. Bluffton reported only 103 residents in the 2010 census. The town saw a steep decline in population after World War II, when many of the farm jobs were taken from men and given to machines. The farm employed only three people in its day of conventional cattle monoculture, but it’s now the town’s only employer, with more than 100 people on hand.

I learned much of this from the back seat of Will Harris’ pickup truck, as he drove me and the two other women who make up my blog, The Seed & Plate, around to give us a full scope of what happens at White Oak Pastures.

“We’re fiercely proud of what we do,” he said while manning the wheel and pointing out pigs buried deep in puddles of mud, goats roaming the forest and cows freely grazing sloping pastures of fertile ground.

I’m confident we weren’t given this insight and access just because we promised to write about White Oak. What we experienced was precisely what’s available to anyone with an interest in what the farm does—it’s a part of the agro-tourism experience that Harris’ daughter Jodi Benoit has made possible for the general public in the last year.

“We didn’t anticipate the tourism thing,” Benoit said, “It just kind of happened.”

People began coming to White Oak Pastures out of curiosity, to see humane animal husbandry scaled up and thriving. There are five cabins for guests during their visits to White Oak Pastures, all of which are decorated with rustic charm and stocked with eggs from their free-range chickens, soap from the tallow of the grass-fed cattle and all the White Oak Pastures logo-emblazoned accommodations for a very comfortable stay.

During a visit, you can see as much of the operation as you’d like, with very personal and in-depth tours led by the Harris family themselves. We saw everything from baby sheep galloping through the beautiful fields to the surprisingly sterile, calm and systematic slaughter of a cow. We ate lunch and dinner each day with the Harrises and their extended family of employees at the pavilion restaurant they opened to make sure their people were well fed.

“I think transparency is the best marketing tool,” said Benoit, while walking us (literally) through each aspect of production on the farm.

The people of White Oak Pastures go to great lengths to demonstrate their values in action. It’s something worth seeing if you’re interested in sustainable agriculture, an exceptional work culture, a dynamic family, the work of an agricultural visionary and especially humane animal husbandry.

“What I hope to show people is not a specific place or a specific procedure, but the interactions of all the systems here. It’s like a whole within a whole within a whole,” said Harris. “We think of this farm as an organism, and different people and animals have different functionalities towards making the organism work, the same way you’ve got a liver and a heart and kidneys, we’ve got ruminants and poultry and vegetables.”