These Athens Beers Are Made with Georgia Ingredients 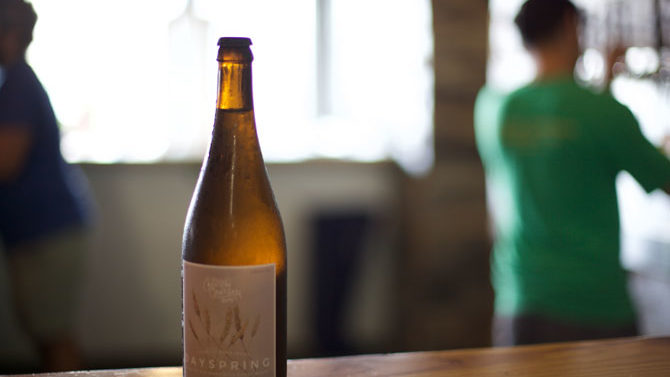 The value of local ingredients isn’t exclusive to farmers-market shopping or farm-to-table restaurant menus. In Athens, local products can also be found in our city’s beer. Terrapin has sourced locally to make specialty brews for years, and in May, Creature Comforts released DaySpring, a grisette ale made with local wheat.

DaySpring is the first in Creature Comforts’ locally grown series. It’s made from wheat grown organically by DaySpring Farms in Danielsville, run by Nathan Brett and his wife, Simone. The Bretts came to one of the first tours that Creature Comforts gave to the public shortly after opening last year. Afterward, they struck up a conversation with the Creature Comforts team and told them about the organic wheat they were growing in Danielsville. They built a friendship and a relationship as they considered how the brewers could use this local resource.

“Eventually it wound up with them purchasing wheat from us,” says Nathan Brett. “It’s been really fun to be around and watch how it’s developed as a whole.”

They’ve been growing wheat at DaySpring Farms for three years now, but this is the most prominent showcasing of the ingredient so far. Making the mash for DaySpring is more work-intensive than the other beers they brew, but it has paid off for both parties. DaySpring was picking up notoriety before it even hit the market. In January, the beer was awarded first place in the Classic Style category of the Atlanta Cask Ale Tasting, and it came in 10th in a Paste magazine national contest for saison-style beers.

A grisette is a style similar to a saison from the Hainut province of Belgium. It’s light-bodied and low in alcohol, features that make it particularly ideal for drinking with dinner. It’s sold in 750-milliliter “bombers” like a bottle of wine—yet another reason to enjoy it over a meal with friends. (If you drink the whole thing alone, we certainly won’t judge you.)

This is the first of Creature Comforts’ beers brewed with local ingredients, but it won’t be the last. They’re already working on another collaborative brew using Rhonda’s Blueberries, a farm in nearby Union Point.

Already, DaySpring Farms is reaping the benefit of their partnership. “The buzz that’s being created for us is helpful,” Nathan Brett says. “To be partnered up with the folks here at Creature Comforts and to have the beer has been really, really special. Just for the sheer joy of being able to have something and be able to see it go full circle like that has been really fascinating and really enjoyable.”

Being involved in the community in meaningful ways has been a priority for Creature Comforts since its inception. Shortly after the doors opened, they began hosting the Athens Farmers Market on Wednesdays.

“We want to be a place that people think of when they think of Athens,” says Shannon Vinson, the brewery’s special events and media manager. “And I think this thing about getting closer to local and using local ingredients for whatever it is, if it’s beer or if it’s dinner, getting closer to that mentality is really important to us, and it’s something early on that we wanted to have as part of our business plan.”

“Anytime you have a partnership with a local grower, just to give awareness and team up with them,” says Spike Buckowski, Terrapin’s co-founder and brewmaster, “I think it benefits both companies, and it makes people aware of local agriculture.”

Terrapin has branched outside of collaborations with local growers for brews like the Moo-Hoo, which is made with Jittery Joe’s coffee. This fall, they’ll release a spinoff of the Moo-Hoo called a Tiramisu-Hoo (you can guess what it tastes like), also made with Jittery Joe’s. They also brew some of their beers, such as Midnight Monk, in local wine barrels from the likes of Habersham Winery, a vineyard in Helen.

The best news for all of us is that we can support local agriculture by drinking local beer, and that’s really not too much to ask.