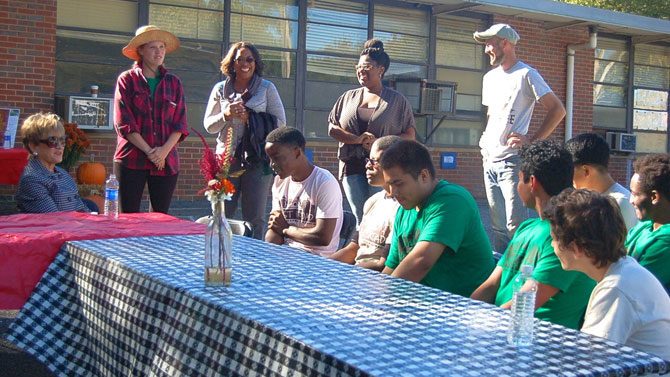 Although she was visiting from Washington, D.C., Thornton is a Southerner herself. The native of Kentucky began her career as a vocational home economics teacher. In the classroom, Thornton laid a foundation of interest in the importance of agriculture. She went on to work for 25 years as the school nutrition director for Hardin County schools in Kentucky and later became president of the School Nutrition Association. From there, Thornton made her way to Washington. Thornton’s purpose in D.C. is to increase access to healthy, affordable food, to promote and coordinate nutrition and agriculture education, as well as to guide nutrition policy for the USDA’s 15 nutrition assistance programs.

The Athens Land Trust hosted Thornton, alongside her colleagues from Atlanta and the District, with a day of activities to highlight the many agricultural initiatives of the organization. The event began with a roundtable discussion at the West Broad Market Garden with Thornton and selected stakeholders affiliated with the land trust, including leaders within the Clarke County school system, conservationists at the county level, invested parties from the university and leadership of the Athens Land Trust.

In the dialog, Thornton encouraged local food and farming education in Athens-Clarke County. The key to getting students to eat fruits and vegetables, according to Thornton, is getting students involved in every step of the food production process. “We know that when kids actually take part in planting the seed, taking care of that plant and harvesting that product, they’re so much more likely to consume that product,” she said.

Thornton said she’s witnessed students across the country being successfully introduced to fruits and vegetables. In some places, the cafeterias can’t keep up with the demand for healthy treats like baked kale. “Often when kids aren’t eating fruits or vegetables at school, it’s not because they don’t like them. They have no idea what they are, and they’ve never tasted it before, and it takes longer to consume fresh foods,” she said. “We’ve got to help people who do the scheduling in schools to know that if I’m eating a big salad, it takes me a lot longer to eat that than it would a processed food that I practically inhale.”

Thornton responded not only to the issues of taste and time, but also to the challenge of including nutrition and agriculture education in a curriculum constrained by standardized testing. “Food is a topic you could use to teach any student there is.”

After a day of demonstrations and activities of farm-to-school initiatives in Athens, Thornton articulated the importance of making sure that local citizens and decision-makers know how much is being done for student nutrition and exposure to agriculture. “I would encourage you to make sure that people know what is happening with these farm-to-school dollars,” she said.

And as of late, this is particularly pertinent advice. Despite the success of programs at the West Broad Market Garden and the prestige it required to draw the attention of USDA, the garden has recently fallen under threat of being shut down.

The Clarke County school system may relocate many of its offices to the historic West Broad School, where the garden is currently located. If a feasibility study demonstrates that the building would be conducive and the proposal is accepted, the school system will fund an $8 million renovation to what was once an African-American elementary school in Athens prior to desegregation.

When the Athens Land Trust was allowed to plant on the property, executive director Heather Benham, who also wants to renovate and preserve the building, said she was told there was no pressing need to do so immediately.

If the Clarke County School District moves its offices into the West Broad School, the West Broad Market Garden will be no more. The idea to relocate the garden has been floated, but it is unlikely that any relocation would be as purposeful. The West Broad Market Garden has been an important gateway for many members of the Rocksprings and Hancock Corridor community to gain access to locally grown, healthy food as well as the opportunity to take part in urban farming.

An opportunity to rally around the garden is coming up on Saturday, Nov. 1. The land trust is hosting its 2nd Annual Athens Heritage and Urban Agriculture Festival at the West Broad Market Garden. Friends and customers can see performances by local artists, get a free health screening, eat, ride horses, learn and express their appreciation for the West Broad Market Garden.