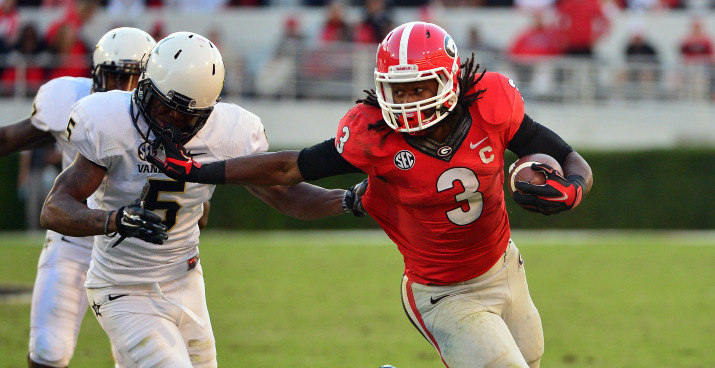 Nearly three weeks after Georgia’s Todd Gurley was suspended by the university while it investigated whether the star running back received cash for autographs, and one week after the school submitted its findings to the NCAA, that governing body has ruled that Gurley must sit a total of four games.

He has already served half that, having missed the Missouri and Arkansas games.

UGA will appeal the ruling immediately in hopes Gurley can return for this Saturday’s match-up against Florida. If the appeal is unsuccessful, Gurley would presumably return for the Nov. 15 Auburn game in Athens.

In addition to the four-game suspension, the NCAA ruled that Gurley must serve 40 hours of community service (!?) and donate part of the $3,000 he received over the course of two years to charity.

To which we say: FOH NCAA.

Todd Gurley, University of Georgia football student-athlete, must sit a total of four games, or 30 percent of the season, for accepting more than $3,000 in cash from multiple individuals for autographed memorabilia and other items over two years. Gurley, who acknowledged violating NCAA rules, must repay a portion of the money received to a charity of his choice and complete 40 hours of community service as additional conditions for his reinstatement. Gurley will be eligible to play on Nov. 15.

In determining the appropriate reinstatement conditions, a 30 percent withholding condition is consistent with precedent in similar cases. Additional withholding was strongly considered because the violations occurred over multiple years with multiple individuals and the student received extensive rules education about the prohibition of receiving payment for autographs. However, the university’s due diligence in its investigation and the student’s full disclosure of his involvement in the violations were factors in not imposing a more severe withholding condition.

The university indicated it will appeal the decision. A membership committee which oversees the reinstatement process will review the appeal this week. The committee can reduce or remove the conditions the staff has imposed, but cannot increase them.