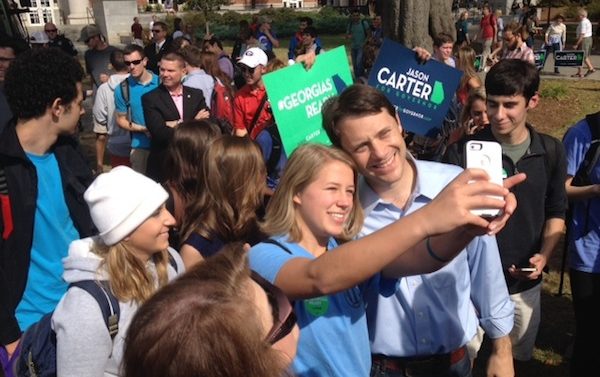 After shaking hands at the Varsity for nearly an hour—for the record, his order was two slaw-and-chili dogs—the Carters headed to the Tate Center for a rally.

“This is an election about the future, not the past,” Rosalynn Carter said, warming up the crowd for her grandson. “We know what’s been happening the past 10 years. We’ve been sliding back. We need to move forward.”

“He’s learned to work across party lines, bringing Republicans and Democrats together to improve legislation,” she said. 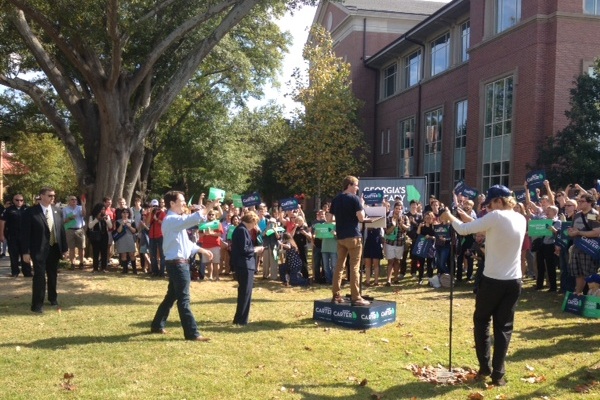 Rosalynn and Jason Carter approach the podium at a Tate Center rally.

Carter told the crowd of about 200 that “we know this state has everything it needs to be a powerhouse,” ticking off an international airport, a major port, high-tech industries, agriculture and educational institutions—not to mention the Georgia football team.

But in spite of those advantages, Georgia is last in unemployment and lost 15,000 private-sector jobs last month because of Gov. Nathan Deal’s policies, he said. He accused Deal of holding press conferences to announce new jobs when they’re nothing compared to the jobs that have been lost.

“If this is the best that this governor can do, we need a new governor,” he said.

Although he’s been trailing slightly in most public polls, “as of today, we are winning this election,” Carter said, citing “staggering” early voting numbers. “What you need to say is ‘We are winning, and we’ll win if we do the work in a week,'” he told supporters.

Speaking to reporters after the rally, Carter said he’s confident he’ll win without a runoff. “At this point, given all the numbers we’ve seen and the early vote and the level of enthusiasm that we’re seeing, we believe we’re going to win on Election Day,” he said.

Did Sunday voting help? “I believe we’re always going to be on the side that says, ‘If more people vote, we win.’ And I think that says a lot about our policies, frankly.”

The 87-year-old Rosalynn Carter reiterated that the election is about the future and that her grandson can reach across the aisle.

“I’ve watched him grow up taking after his grandfather, who stands for honesty and compassion and fairness,” she said. “That’s Jason. I’m very proud of him.” 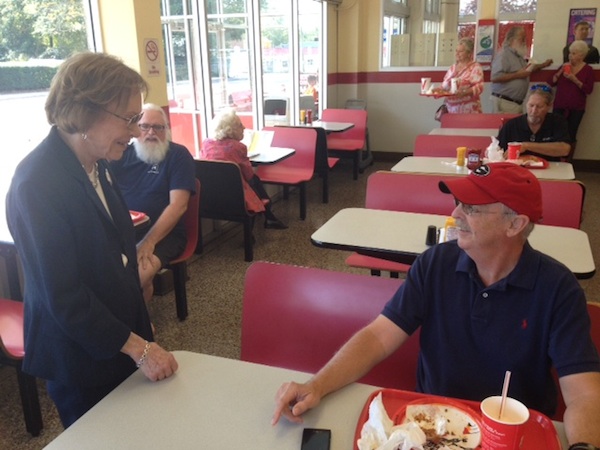 First Lady Rosalynn Carter greets a voter at the Varsity.

She also address how campaigns have changed since her husband ran for governor in 1966 and 1970.

“We didn’t even have TV back then. That’s how long it’s been,” she said. “We went door-to-door. We didn’t have any campaign staff.

“In the presidential race, we didn’t have any money. Everybody all over the country who campaigned for us had to find a house for somebody to stay in, a supporter, or pay for a hotel bill, because we had no money. That’s how we won the election. What we learned was, you stay inside somebody’s house, they got excited about the campaign.”

Jason Carter said his grandmother was “energized” by the election. “She’s clearly having a good time,” he said.