How I Learned to Eat My Veggies: Confessions of a Farmers Market Novice 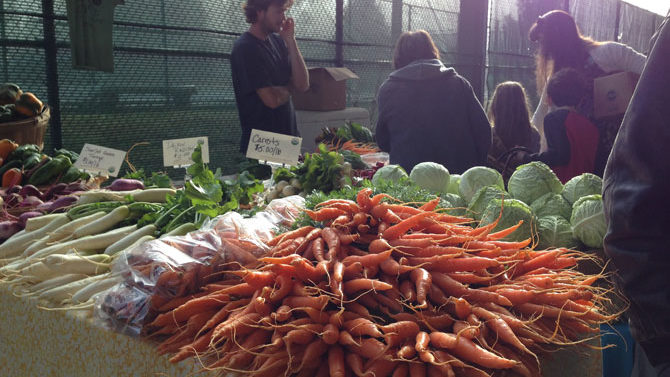 Walking through a farmers market for me used to be like walking through a pet shop, except that instead of adorable puppies and kittens begging for a home I’m not able to give them, it was farmers offering me homegrown vegetables I wasn’t going to eat. But I wanted to show support for our local farm scene at my first Athens Farmers Market years ago, so I went to a pastry booth and bought a buttery chocolate croissant.

So simple. So devious. Those people had my number, because I went back the next week. But I really had gone there to eat more healthily, so that morning I also got a ham and cheese croissant (y’know, protein) and gazed at the pretty vegetable displays, imagining myself in a scene from Sleepless in Seattle or The Godfather.

Several weekly croissants later, I was ready to add some vegetation to my market shopping and eyed the fruit tarts next to the croissants. The baker told me the apples were hand-picked by her, the pecans were local, and her breads were baked with locally grown and milled grain, so I treated myself to her hard work, and it was delicious.

I wanted to buy at least one vegetable, so I wandered around until I landed at the honey booth. I’d heard local honey helps fight against allergies and ailments, because local bees use local pollen. The bee guy said he’d heard that, too, but didn’t know if it was true. Over the next several markets, he told me true bee stories, and it wasn’t long before I was noting the difference between a nerve-wracking yellow jacket and a perfectly peaceful honeybee. I took home a jar of honey and nearly passed out from the discovery of how different real honey tastes from the sugar water at the grocery store. It tasted like a bouquet of spring flowers, and breakfast has never been the same.

Which reminds me: Stay away from the local carrots. One bite, and you’ll expect carrots to have flavor for the rest of your life. Initially, I had no interest in paying $4 for a small bunch of carrots, even if they did have the greens still on them like a Bugs Bunny cartoon. But after weeks of trying to buy something beyond the sugar food group, I gave in. One slim, bright orange, juicy, fresh-from-the-ground carrot has more flavor than an entire 99-cent bag of carrots from the grocery store. And I have to pace myself not to eat the whole bunch in one day, unlike the grocery store carrots that wind up shriveling and rooting themselves into the crisper drawer.

It’s not that I’m anti-vegetable; I just never knew how to make them taste good. I learned most of my culinary skills from my mother, who was a great Southern cook, but most of her vegetable cooking involved boiling or frying plus lots of butter and salt. So my initial grownup attempts to prepare healthy veggies made me weep between forced chews and sent me running back to cheeseburgers, crying, “I’m sorry! I’m sorry!”

Then one market day I stopped in front of an assortment of vegetables, pointed at a sign and its accompanying basket, and asked the farmer, “What the heck are sunchokes?” After he explained that they were sunflower roots, I asked, “How do they taste?” Then, more to the point, “What do you do with them?” He said, “Cook them like potatoes. Peel them, chop them up, throw on a little olive oil and salt and pepper, and roast them in the oven.”

Potatoes! Something I know how to cook and am not afraid of! If I could pretend these things were potatoes, I could totally cook them. And they sounded so exotic—“I cooked sunchokes for dinner last night”—that that single accomplishment would wipe out years of guilt and maybe set me on a new, unembarrassed path to hip, healthy adulthood.

So I took home a bag of sunchokes, stuck them in the crisper and ignored them for weeks. I’m thrilled to say they were more forgiving than grocery store carrots—most freshly harvested local veggies not only have more flavor, they also last longer in your fridge. I chopped them up, threw on some olive oil and salt, roasted them and the next day got to say, “I cooked sunchokes for dinner last night—and they were delicious.”

Dizzy with power and ready to take on more vegetables, I signed up for a CSA (community-supported agriculture) weekly vegetable subscription. I have since learned that in the simplest terms, every fruit or vegetable you get at the farmers market can be roasted, cooked into a soup, chopped up and thrown into a salad or all of the above. 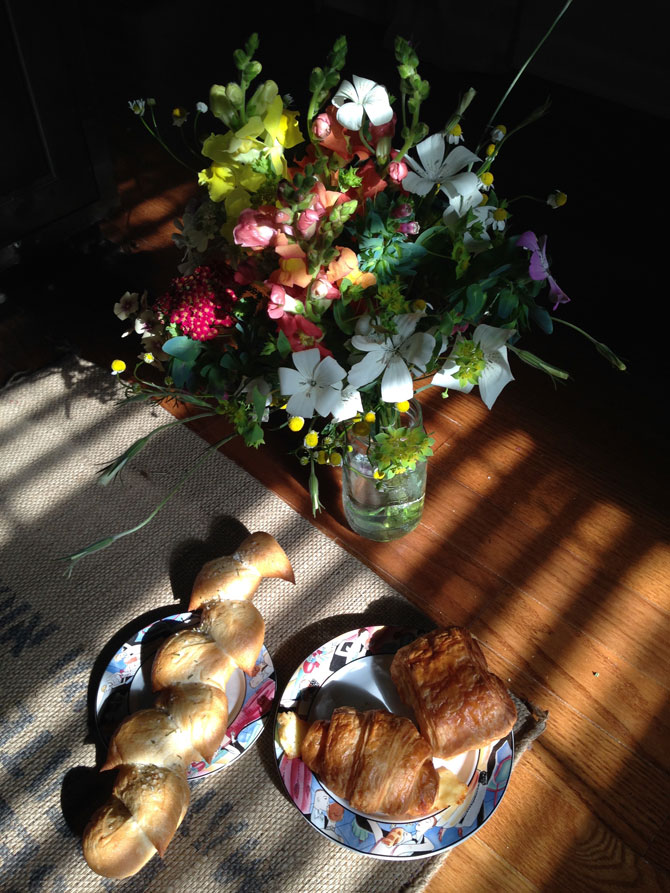 I’ve also learned the value of buying local, which has more selfish benefits than supporting your community—you often get more return for your bucks, although it may not seem like it at first. I used to buy cheap flowers from the grocery store, but now I wouldn’t waste my money. Our local growers work to cultivate healthy, beautiful flowers that usually last at least a week and don’t have pesticides from who-knows-where. The same care and quality goes into the local jams, syrups and soaps. You’d spend a little more for tires if the better set lasted longer, and you got more for your money, right?

Still, my favorite part of going to our farmers markets is what lured me there in the first place: the sense of community in a warm environment, with music, food and camaraderie.

But beware those carrots.