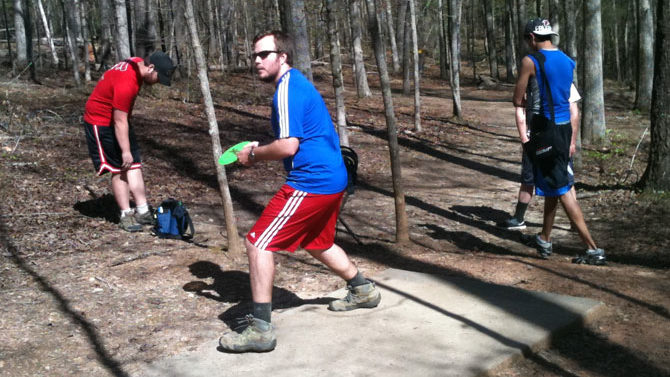 There’s a lot of plastic being thrown around Athens these days, and it’s not just credit cards. Disc golf, or Frisbee golf, is a casual sport that’s seriously growing in the Classic City.

“I decided to have a tournament to give players in the local community the chance to participate in a PDGA tournament and as a platform to showcase Sandy Creek Park to area players,” says tournament director Ryan Adams.

Athenians are also using the tournament as a platform to showcase Athens to the players and their friends and families. As part of the title sponsorship, Terrapin, which has two baskets on its patio for employees to play disc golf, is inviting all the players to the brewery after the tournament for some classic Athens relaxation. Several other local businesses are sponsoring tees at the event, encouraging the players and their companions to make an Athens weekend of playing at Sandy Creek and enjoying all the restaurants, shops and activities when they’re not on the course.

And for some players, it’s about a little local rivalry.

“It’s nice to make the Atlanta players come to us for once and enjoy our great course at Sandy Creek Park,” says Jason Hartley, captain of the UGA disc golf team. He’ll play his 18th tournament on Saturday at Sandy Creek.

In previous years, disc golf in Athens was played primarily by UGA students and small groups in town. Now, more Athenians are hitting the courses, from casual play with family and friends to recreational nights at Sandy Creek Park to up-and-coming players making a showing at out-of-town tournaments.

“We continue to expand our disc selection,” says Michael Costello, regional marketing specialist of Academy Sports and Outdoors, which has sponsored every disc golf event at Sandy Creek this year. “I think in general we’ve seen an increased popularity in the sport, as it appeals to a wide audience.”

Disc golf is a variation of regular golf. It’s played on designated disc golf courses where the “holes” are above-ground baskets that catch discs thrown from as far as 400 feet away. The drivers, mid-rangers and putters are the discs themselves. Like ball golf, the goal is to hit the basket in as few strokes as possible.

Founded in California in the 1970s by the modern inventor of the Frisbee, “Steady” Ed Headrick, the sport of disc golf has grown worldwide. The PDGA, based outside of Augusta, has over 57,000 registered members from more than 20 countries. The ease of the sport combined with its affordability—a disc can be purchased for less than $10, and most courses are less than $3—has made it popular for all ages and walks of life.

“Remember Othello, the board game?” asks Doug Porter, one of the designers of the Sandy Creek course. “Their slogan was ‘a minute to learn, a lifetime to master.’ That’s disc golf.”

Fortunately, most Athenians find they don’t have to master disc golf to have fun with it. In March, members of the Athens Disc Golf Club—open to anyone who plays disc golf in Athens—launched a recreational doubles night. Casual disc golfers and people who want to learn how to play meet at Sandy Creek on Tuesdays at 6 p.m. for the opportunity to hang out with new people and enjoy an evening at the park. One mom showed up on the first night to secretly brush up on the sport so she could try to keep up with her son. Local artist Lauren Williamson, who’ll be making her tournament debut on Saturday, brings her dog Dylan, a favorite among the disc golfers, to the course to find her discs. One night, a foursome got to witness Jason Hartley throw an ace (a hole in one).

“Straight down the middle with a touch of fade right into the chains,” says Hartley. “I believe I said something like, ‘That’s an ace!’ halfway there or so.”

Hartley takes the sport more seriously than the recreational set, having played 37 courses in six states in just over three years. After Saturday’s tournament, he’ll travel to Charlotte to play the Charlotte Amateur Championships. He also joined four other Athens players at the PDGA’s Hall of Fame Classic last month outside of Augusta.

“School is my current priority, but disc golf is a close second,” Hartley says.

Fellow Athens disc golfer Bryan Huff took second place in the Amateur Advanced Men’s division at the Hall of Fame Classic, leading two of the four rounds in a field of 70 and missing first place by two strokes. Competing in the pro division at Saturday’s tournament, Huff’s the only Athens player invited to next week’s inaugural Georgia Team Invitational in Lula, playing as part of an Atlanta team that will battle Chattanooga, Birmingham and Huntsville teams. The Athens Disc Golf Club intends to increase the number of eligible quality players, so that a full Athens team will be invited to battle it out in the future.

But, you know, in a casual way.