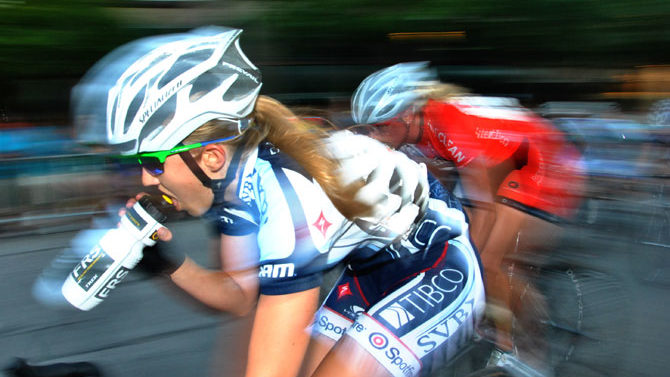 It’s Twilight Weekend in Athens, and that means races, recreational beverages and revelry, culminating in the big race Saturday night: the Terrapin Twilight Criterium. The streets of downtown will be filled to capacity as 150 cyclists tear through the town at 40 miles per hour in an explosion of color and speed blowing past the crowd who cheer at… whatever, they have no idea, they’re just having fun watching and cheering.

So what is actually going on in the race? It turns out, some cool stuff.

You know that first group of cyclists that breaks away from the main field and races as a small pack? Even though they’re individual competitors, they’re actually working together as a team most of the night.

“It’s a gentlemen’s agreement that they’re going to work together to get through the race,” says Christian Foster, co-owner of Athens’ amateur Team United Healthcare of GA/706P, “and then in the last few laps, it’s every man for himself.”

As is the case with all of the riders, wind is the enemy, and like geese, in that breakaway each cyclist takes turns riding in front to allow the other cyclists to draft behind him and conserve energy just to get to the end of the race. It also explains why they race so close. 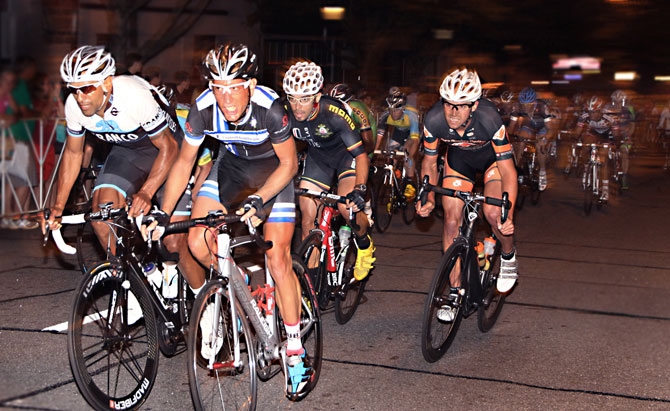 “The closer you are, the less energy you have to expend. That’s why the pack is so tight,” says Foster. “You want to be as close as possible to that wheel ahead of you in order to maintain the draft. You’re toeing the line between advantage and disaster.”

It’s also why the field breaks apart early in the race, with the seasoned amateurs and pros riding together in front. In the back of the field, the less seasoned riders struggle to stay on track, each unable to ride smoothly and closely enough to the rider ahead of him to draft effectively, and unable to offer a draft to the cyclist behind him.

But the riders are part of six-man race teams, and those teams also take care of their own. One of their riders may be the “sprinter,” so the other riders work different angles to allow him to conserve his energy for the final sprint.

“We need to protect him with our riders to keep him out of danger or wind or from having to do work so at an opportune time, he’s fresh and can be in position to go for the win,” says Brian Molloy, co-owner of 706P and Athens’ The Hub Bicycles.

There are also other challenges.

“There are shadows and the constant dilation cycle your pupils are going through, from dimly lit stretches to bright flood lights on the Start/Finish line to ‘black holes’ on the course,” says Foster. “These guys are riding at speeds of up to 35–40 miles per hour down Clayton Street all within a few feet, sometimes inches, of one another, and the lighting scenario is changing every 50–100 meters or so. The shadows play tricks on your peripheral vision.”

Then comes the strategy of the wind and drafting. The teams may have a strong “lead out man” who battles the wind at the end of the race, letting their sprinter draft behind him until the moment is right for the lead out man to drop off and the sprinter to speed to the finish line. Or the sprinter is alone in the breakaway pack in the front, and he slingshots around another team’s cyclist he’s been drafting and crosses the finish line.

“The most dominant team in the game is United Health Care Pro Cycling, sponsored by the national entity,” says Foster, whose amateur team is in the Georgia division and hopes to upset the pros Saturday night. “What the Blue Train will probably do if there’s a breakaway at the end of the night and they don’t have one of their sprinters in that breakaway, they have the confidence to let the breakaway sit out there.

Momentary chaos as the field absorbs the breakaway and…

“Lead out man rides as fast as possible, delivering his sprinter through the final turn, and from there, the sprinter does what he does best—he just goes flat-out to the finish line,” says Foster. “There are a billion different ways the race can go down, but I’d bet that’s the way it will go down Saturday night. That’s a textbook scenario.”

Other possibilities are cool, too, though. If, with 10 laps to go, there is no breakaway, just the entire field racing toward the finish line, Foster offers a scenario of cyclists versus wind.

“It’s so fast and furious, the riders are probably single file,” he says. “When it’s slower, it bunches up, and when it’s fast, it strings out to single file. With the top 30–40 guys going 40 miles per hour single file, the guys in the front in the wind are going to blow up—they’re done, they’re fried. So those guys are going to keep moving out of the wind and vaporize, and it just gets whittled down until about two laps to go with the top 10 guys, not a lot of position changes. The guy in front is going as fast as he can go.”

There will be plenty going on during the hour leading to the finish to keep onlookers entertained. Throughout the race, the emcee will announce primes (pronounced “preems”—French and European is the style of the cycling world), which are one-lap mini-races within the race. Each prize may be cash or points toward the year-end championship for the winning rider.

And then there’s the crowd participation from the racers’ perspective.

“The crowd can lift you to a whole new level,” says Eric Murphy, co-owner of 706P and a Twilight weekend contender. “I personally won a few of the smaller run-up events to the main event, and hearing your name or just the screams as you go around the course can really lift you up. It’s very motivating.”

But the evening’s bottom line is the race to the finish line.

And when the race is won, everyone knows how to celebrate.