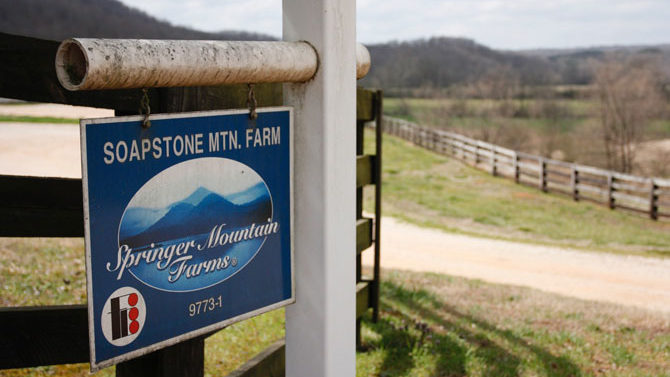 At The National, you find it tossed in a yogurt-herb dressing over arugula. At South Kitchen + Bar, it’s grilled with an orange blossom-honey glaze. It even makes an appearance on your Texas bacon chicken melt at the 11 Waffle House restaurants around Athens.

Northeast Georgia is known for raising chickens. Gus Arrendale and Joe Hatfield, whose families own Springer Mountain Farms, were brought up in the industry. After years of raising birds in traditional commercial chicken houses, Arrendale was ready for a change. “[Gus] is the one who had the vision to create a very different chicken, something that didn’t have all the additives that the rest of the bigger pieces of the industry do,” says Dale Faunce, Springer Mountain’s marketing director.

But Springer’s founders encountered pushback at first, especially from their parents’ generation of raisers. They were told organic feed cost too much. They were told farms would be reluctant to change old ways. Despite doubters, the Springer Mountain Farms program launched in 1999. The philosophy was simple: Do what makes sense. For Arrendale and Hatfield, this meant localizing their farmer network and treating their birds well.

It sounds easy enough, but their strategy would require an overhaul of the old system. A traditional chicken house is built for efficiency. When you walk into one, says Faunce, you’re overrun with chickens. The birds are so packed in, they sometimes have to be de-beaked or de-clawed so they won’t hurt each other.

Springer Mountain puts fewer chickens in a standard house so they have more space to wander, or scurry away from people, as they’re wont to do. “When they scatter,” says Faunce, “there’s enough room that you could play a basketball game in there.” That was just the first change.

When its program began, Springer looked to neighboring families who had been raising chickens for generations. “We’re local,” says Faunce. “Our focus is here.”

Knute Carnes is a third-generation farmer who has worked with chickens for most of his life. His is one of 300 farms in the Springer Mountain network. Carnes, like other farmers in the Springer program, was happy to make the switch from the “regular bird” because he likes Springer’s standard of quality. “Everything that I sell I’m proud of, and it’s something that I would, of course, serve my family first,” says Carnes.

The Springer label, says Carnes, carries a promise of no hormones and no antibiotics. “You know what you’re buying when you buy the label.” Ensuring the integrity of that label means more work. Springer requires that each of its farmers follows the standards set by the American Humane Association (AHA), whose goal is to ensure the health and fair treatment of the birds. The standards are demanding. Carnes checks on each house three times a day to make sure the birds have enough space to roam and the right amount of light and water, and to monitor the temperature of the house.

Add to that organic pesticide- and herbicide-free feed, and these birds are living the life compared to their “regular” brethren. Even so, chickens can get sick. Springer Mountain only partners with farms within a 60-mile radius of their headquarters, so it only takes an hour for help to arrive.

All this effort reduces the chickens’ stress. That’s good for the bird and good for our taste buds. A healthy, happy chicken tastes better. That’s why, Faunce says, Springer Mountain chicken is starting to show up more frequently in high-end restaurants and health food stores throughout the Southeast. In the last few years, sales have skyrocketed.

Carnes has noticed the higher demand, too. He thinks Springer Mountain has its finger on the pulse of what consumers want. “People want to know what’s in the food they’re consuming, and they’ve hit on that. And it’s working out well for them.”