Southern Brewing Co. Takes Local to the Next Level 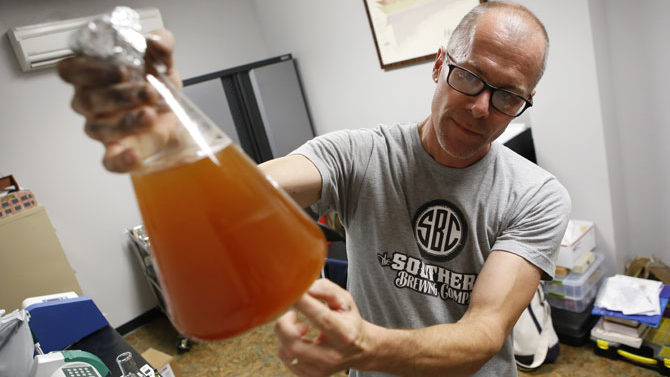 You don’t have to be a connoisseur to enjoy craft beer—a fact that makes a town like Athens quite appealing to prospective microbreweries. Let’s just say that this town is pretty much a sure thing when it comes to vending boozy wares, with its heady combination of party-time drinkers and people who want curated, locally sourced products, boozy or otherwise.

Whether it’s Terrapin, Creature Comforts or newcomer Southern Brewing Co. (which opened for tours last month), Athens loves its small breweries. In the opinion of Southern Brewing Co. co-owner Rick Goddard, “In Athens, the craft consumer is second to none in the state.” But those aren’t the only reasons that Goddard and his business partner Brian Roth (a homebrewer working on his first big commercial project) decided to open SBC off Highway 29 near Athens Tech. They’re both D.C. transplants born in Georgia, but they really like our town, and they want you to like them, too.

While Roth wrangles yeast and makes beers with local green tomatoes and carrots, Goddard focuses more on the community’s relationship with SBC and making the brewery a destination location for a rather industrial side of town. Athens-Clarke County has already approved plans for an amphitheater on the property, and they also hope to host a farmer’s market there in the future.

They met in Washington, D.C., when they both worked on the corporate side of the beer industry—Roth as an Anheuser-Busch wholesaler, and Goddard as a lobbyist who eventually became chief of staff for Nevada congressman Mark Amodei.

“When I lived in D.C., I saw my son for 30 minutes in the morning and, if I was lucky, at night,” Goddard recalls. “You have to plan play dates a month out.” He rolls his eyes and gazes out onto the lawn of SBC, where they’ve planted blueberry bushes and peach trees. And yes, they’ll be making beer with those.

“Now, he comes to work and hangs out with me,” Goddard continues. Apparently, the little guy really likes making keg forts. SBC has the disc golf and cornhole games of your standard Southern biergarten, but they also have piles of toys for kids and a menu that would arch the eyebrow of the most discriminating #buylocal hashtag enthusiast.

SBC is not only making beer for us, but making beer out of us. “Brian is the mad scientist behind the beer,” Goddard says of his partner as he drags hoses to and fro on the production floor. Roth wants the primary source of SBC’s brewing yeast to come directly from the air out here, a process known as “wild fermentation.”

Only four ingredients are needed to make your most basic beer: a grain of some sort (typically barley or wheat), hops, yeast and water. Hot water renders out the grain’s sugars, then hops and other flavorings are added. After that, yeast is thrown in to devour much of the sugars present, which creates alcohol. Brewers toy around with these basics to create the variety of brews available on the market today.

The current industry standard is to purchase commonly accepted brewer’s yeast strains from commercial labs that have already vetted them for their suitability and flavor profile, and the prolific nature of yeast alone makes wild strains persona non grata in most breweries. As a matter of fact, wild yeasts are referred to in the brewing industry as “spoilage organisms”—they’ll ruin a good beer. If something other than what you purchased gets into your fermentation kegs and propagates, the flavor and character of the brew can go south and put a brewer back at square one. It’s one thing if this happens on a small scale, such as with home brewing, but imagine the cost of throwing out thousands of gallons of unsellable product because of one pesky organism breezing into your wort.  Commercial breweries invest tons of time and money into making sure this doesn’t happen by furiously sanitizing their equipment to prevent cross-contamination of yeast strains. According to Roth, who teaches a class on the history of beer and brewing for the Osher Lifelong Learning Institute at UGA, pasteurization was invented specifically to combat spoilage in beer and wine.

Wild fermentation occurs when brewers use the naturally-occurring yeast in the air to metabolize sugars in the wort and create the alcohol that we’re all trying to imbibe in the first place. I’ve seen this done on a small scale at home, when my sister left a bucket outside overnight, then poured raw apple cider and sugar in it, topping it with a rudimentary fermentation lock and letting it sit until it became a fairly palatable hard cider.

Roth’s approach is much more nuanced: He works with biologists and botanists to isolate yeast strains in sterile lab conditions. SBC debuted at the Classic City Brew Fest back in April by serving attendees a beer brewed with wild azalea yeast. This yeast was collected by Roth and a biologist at Athens Tech from azaleas on the SBC property before the land was cleared. Roth has also collected 29 different yeast strains from both common and uncommon local plants at the State Botanical Garden of Georgia, and he’s working to further isolate those individual strains to use them for brewing. SBC has an on-site yeast lab exactly for this purpose, which is not common for operations as small and new as theirs. They’ve got three strains going, so far—all for future brews.

Right now, they’ve got beers on tap at The Pine and Trappeze brewed with yeast from a commercial lab: Calibration 01 and Calibration 02. Those are more placeholders than names, really, because Roth is still in the experimentation stage of crafting the final product line for SBC. They have 32 taps in their tasting room, and they intend to fill them all, with 29 local yeast strains and Roth’s imagination at their disposal.

Roth is a UGA sculpture grad and a homebrewer since 1993, already well-known among local homebrewers. He takes a tongue-in-cheek approach to recipes that works well with his own discriminating palate. His response to the pumpkin beer trend of the fall was to actually brew beer in a 15-gallon pumpkin from Washington Farms in Watkinsville. (Goddard indicates a region somewhere near his hip when trying to describe how tall the thing was.) Then there was the beet kölsch that they crafted with Richard Miley, owner and executive chef at Catch 22 Gastropub. Miley and Roth have partnered up for different homebrews in the past, a collaborative relationship that challenges Roth and shows him that he can get away with a lot when making new recipes.

“I’ve always done a ton of collaborative type stuff [in my art],” Roth says. “From an artistic standpoint, breaking out of your mold and having to tear your ego down by bringing [in] somebody else and folding them into what your bigger idea is… it’s crazy.”

The wild azalea beer from Brew Fest is going into major production soon, as is beer brewed with yeast from our own state flower, the Cherokee Rose. These will be on tap in their tasting room within the next couple of weeks, according to Goddard, and he says that they’re considering brewing with sugar beets again after the success of Miley and Roth’s ruby red kölsch. There was talk of past homebrews made of green tomato and carrot, brewing giant pumpkins and leaving petri dishes on the porch. They are crafting a literal taste of Athens, and they are making it beer-flavored.