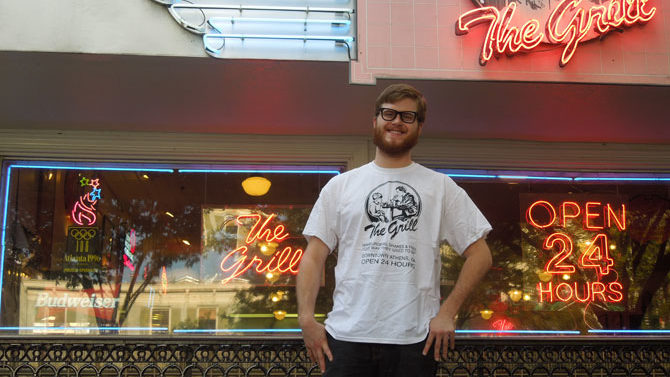 I went to to a restaurant for a very late-night snack, and Daniel was my server. He has only lived here about three months, but he’s had the opportunity to learn a lot about our city during his short time working at this Athens landmark. He’s worked in the food service industry since he was 15, but is still surprised about the outrageous things he sees and hears while working the late-night shift.

But Daniel is more than just a guy who can crack jokes while delivering your fries and feta. Although he’s had to take a hiatus for financial reasons, he is a few credit hours away from graduating with degrees in political science and sociology from Kennesaw State University.

Flagpole: What did you do before moving here?

Charles Daniel Thompson: I started in the food-service industry when I was 15 as a grill cook and a fry cook, working three deep fryers, a stove and a flat-top grill, making sandwiches and chicken wings at a place called Pinky’s Wings and Things in Cartersville. And the man who owned that also had a catering company, and I did catering work for him for several years. And then I continued in food service, and I’ve worked for a five-star golf resort, Red Lobster, California Dreaming, The Grill at Lenox, and then I’ve worked for, goodness gracious, another catering company, several more restaurants, I worked at Olive Garden briefly, Cracker Barrel briefly. I worked at a Blimpie one time. I hated making sandwiches, hated minimum wage. And I was very fortunate when I lost my last job [working for the Bartow County Tourism Bureau], my little sister told me a job had just opened up… so I came and applied, came here and worked a shift, and then I moved to Athens. So, mostly food service. [Takes a drag of his cigarette.] A lot of bartending, lot of serving.

FP: So, what have you noticed about people working in food service? I guess The Grill is a crazy example, right?

CDT: OK. Yes. Totally… It’s still a culture shock for me. Athens is kinda like a different country. Um, I’m from a town that has two bars. They’re about four miles apart, and only if you live around either one do you walk there. So, it’s rare that people get real messed up and then can’t drive… And this is the first time I’ve had a job where it was like 11 p.m. to 7 a.m. And it is crazy, it’s just crazy. You have the most drunk, obstinate people come in, and they don’t understand why you can’t serve them because they’re too intoxicated. Or you have tables say the most ridiculous things, and you get to overhear a conversation about young ladies talking about their vibrators or something silly, like you’ll have someone point out that one of your coworkers has a hickey on their neck, and a table will be talking about that.  It’s also amazing the way people behave. Like, you’ll have people chant and shout and sing and be generally disruptive. And it’s something that certainly if someone acts far too out of bounds, they’re gone, but we have to tolerate it to a certain degree because that’s the clientele at late night.

There are a few things that really get to irk you. Like some people—I’ve seen this happen several times and it kinda peeves me—they’ll come in and sit down at a table. Then they’ll all get up and use the restroom and then they just walk out. And I know that’s a small thing, but it’s something that management is really worried about, and so it reflects poorly on the servers when it happens.

I’ve also noticed, as far as making money here in Athens, I really love the late-night crowd ’cause a lot of them are really good tippers.

CDT: Um, it’s different. It’s kind of like getting to be a vampire without any of the cool powers, ’cause you rarely see daylight. I sleep normally from anywhere around like 9 a.m. or noon to like 8 p.m. or 10 p.m. So, I rarely go out during the day, and my social life has changed radically since I moved to Athens. So, I hang out with a really late-night crowd. I might get off with a cook at like 7 a.m., and we’ll go back to my place and have a couple beers. And, you know, I would never think I’d be drinking at 7 a.m., but that’s when I’m getting home. Like, that’s my down time before bed. It’s a strange adjustment. I genuinely like it, it’s pretty cool, but it’s definitively very different.

FP: You’re a political science major; what are you thinking about this election season?

CDT: Oh God, where to begin. Mitt Romney’s such a nitwit. The scary thing is Mitt Romney might win, and it’s for the reason Republicans have won in elections for the past 30 years, and that’s people in conservative communities will vote with their religion or what they construe as their morals and not their wallet. ‘Cause honestly, if you make less than $250,000 a year, there is no freaking reason to be voting Republican. There’s not. They’re not going to help you. They don’t care about you. Their tax programs are going to screw you over… And it’s because he’s a Christian of some kind, and we all know Obama’s a Muslim. [Editor’s note: Sarcasm.] He’ll get votes for that reason alone. They’ll be plenty of people in states like Georgia, Alabama, Tennessee, Mississippi for sure, who are going to vote for Mitt Romney because, in their eyes, he is the white Christian president we should have had four years ago. And they don’t realize that he is going to ruin their grandmother’s Medicare, make children die of starvation in the street, and he is going to take money out of their pockets and put it in his! And God bless Fox News for helping them do it.

FP: You obviously pay attention to the news. What are your favorite news sources?

CDT: I really like BBC World News. They’re pretty non-biased, they do a really good job. I will watch CNN, especially during election time, because they are a little more to the left and a little bit fairer, and you never see Glenn Beck on there. I certainly love “The Daily Show with Jon Stewart” and “The Colbert Report.” I think those are the two most accurate, best news sources, and all voting citizens should watch them.

FP: Except, I know a lot of people who are really conservative and they love “The Daily Show,” and they love Colbert, and I don’t understand it.

CDT: What’s so great about Colbert is that it’s satire, and he’s very much making fun of the right. And so many people on the right love him, and I really think only about half get that it’s a joke.