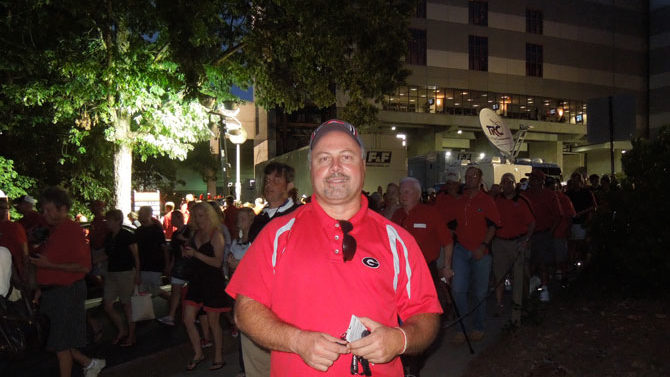 Timothy King is a metal fabricator for the University of Georgia who’s worked on everything from the chapel bell to farm equipment, and he is an active member of Northside Baptist Church. He also loves tailgating with friends he met while working as a parking attendant, which is where I met him on a recent football gameday.

Flagpole: Have you been tailgating here all day?

Timothy King:  I’ll tell you what I’m doing here. I don’t even know if you want to interview me. Now, these people right here [he points at an SUV parked across the street] are from Warner Robins. So, they’ve been coming up here, they’ve been parking at this parking space right here since, I think, ’89. So, I go and I come up here at 7 [a.m.], I park that vehicle for them and set up this tailgate. Yeah, so then we tailgate all day. Actually, today, I just didn’t really want to go up today, but they have box seats, so we go up every game to the box seats. It’s the Christies’ tailgate, and then everybody else comes, but it’s pretty neat.

TK: [laughs] There’s all kinds of people here from all kinds of… That’s the thing is the Christies—anybody who is anybody, when they come up through here, they see the Christies. Yeah ’cause Dr. Christie, he’s an optometrist, they’ve got like three or four other different businesses, so he’s really an interesting guy. Dudley Christie is his name, and Linda Christie, that’s his wife. But he has a daughter who lives up here. She played golf for UGA. She played on the championship team. So, like I said, they come up here and this is where all the family gets together, so that’s why they love coming here. They can hang out, and all the kids love it, and they get to see all the kids. Their daughter just had a newborn baby. So, it’s really neat. I’ve been doing it for about five years.

FP: So, how did you start doing this?

TK: Well, I was working for [UGA] Parking Services, and I had this lot right here [he points to the lot next to the Geography building] up to here [where we’re sitting next to the stadium], I had all these parking spots. And [Parking Services] wanted to move people around. They were doing all this shuffling. And I had gotten to know the Christies and all, and they was like, “If you want to stay here, don’t worry about it. We’ll take care of you.” So, I started working for them. They are super nice people. I mean, they’re just good people. So, now it’s almost like, when they get the tickets, they call me and say, “We got the tickets. Wanna do it this year?” I said, “Sure.” And you know I said, “I appreciate you… You know, I like your tailgate.” And he said, “This right here is just as much your tailgate as it is ours. So, they make you feel at home.  I promise you, if they were here right now, they’d say, “Get you something to eat; get you something to drink.” I mean, they’re just that kind of people. They’re giving people.

FP: So, you just come and set it all up.

TK: Yeah, and then I tailgate with them all day long… I go to the game, usually. Actually, this is the first game I haven’t been to… The thing that gets me is, it’s almost like Parking Services has almost eliminated the fans. Like there was people who parked right here over by Chemistry—they parked here since the ’60s—but they told them, starting this year, you can’t park here no more. ‘Cause it’s about money. In that parking lot right there, if you don’t donate at least $100,000, you don’t park in it. Used to be, when I first started [working for Parking Services], you could park over here [on the sidewalk]. They cut that out. Every year, they just cut out more and more and more. There used to be a guy that’d come and set up right here; he was a DJ. No more DJs on campus.

A lot of people don’t even tailgate anymore. They think it’s too much. They just stay at the Georgia Center and kind of tailgate up there. Like Rick, over there in the silver one [he points to a silver SUV], they come all the way from Dublin, Georgia. He’s like, “There may come a day when they say you can’t tailgate up here no more.” And he’s been coming here since he was a little boy. So, there’s a lot of history here, but it’s almost like they don’t really care about it. You know, what have you done for the university today? Don’t worry about how much money you gave yesterday. What did you give today? It’s sad, but I guess it’s what makes the world go ’round… It’s like, I’ve been with the university 13 years, at the Physical Plant. And we haven’t gotten a raise in like four or five years, and every year, seems like, maybe it’s a couple years, but either the insurance goes up or the parking goes up. Really and truly, right now I actually make less than I did when I started.

FP: Because of all the other expenses. You have to buy a parking permit through the university in order to go to work?

TK: Yes, right. That is it. Say I drive another one of my vehicles, and I forget my parking pass, I could get a ticket, and that ticket’s $50. I mean, man. It looks like they could just run your tag and say, “OK, he’s a permit person.” But really, in all fairness, I love the university. I love working for them. I have a great boss. We call him K.C. but his name’s Kenneth Chester. I mean, I probably have one of the best bosses over there at Facilities Management. And the time you get off and all, granted you want to make as much as possible, I mean that’s human nature, but I enjoy it because I get the time off.

TK: Yeah, the [UGA Chapel] bell tower, we had a big hand in putting it back up. I mean, it’s weird because we say “fabricate,” and it goes. I mean, you wouldn’t believe some of the stuff we’ve made. We do a lot for [the veterinary school] over there. In our shop, we built a cattle thing where they put like bulls and stuff in to work on them. We built one of them. That thing cost $12,000.

FP: Wow. I didn’t realize that you did that all right there.

TK: Well, that’s just one department. You have your plumbers; you have a welding department. You know, a lot of different things over there that people don’t really realize sometimes all that goes on. A lot of times, people just go to school and don’t notice things like that.

TK: Basically, all my life. I went to Clarke Central, Clarke Middle, West Broad [Elementary]. I’ve seen a lot of changes. I grew up in Stonehenge. It’s out there past the mall. All these stones are out there. And at one time, the nearest red light was Hawthorne and Alps Road. And it was just two-lane, it wasn’t four-lane. Even around here, the different buildings that’s been built. Baxter Street used to run down through the university. Then they changed it… Coach Yoculan [he says her name under his breath as she walks out of Sanford Stadium]. She used to be the gymnastics coach…. I mean I love Athens. It’s just where I grew up at. You know, people come and go, but it’s just my home.