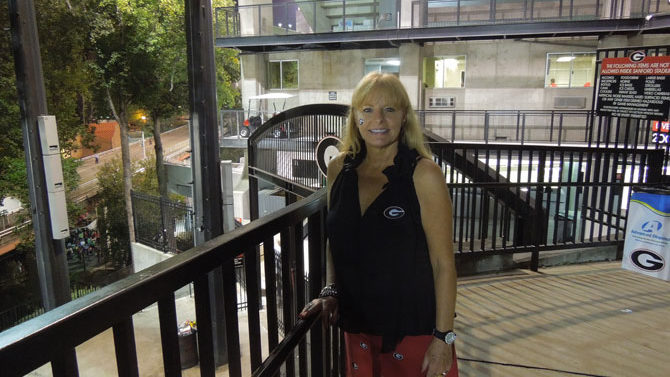 On Saturdays during the fall, the Athens population more than doubles when scores of University of Georgia football fans take up temporary residence here. But these Dawgs are not really visitors. Many of them lived here during college, have been coming back to Athens for decades and consider Athens to be a second home. They have tons of memories and have seen the city change over the years.

Troy Bankston is one of these temporary residents. She and her family have been coming to Athens to cheer on the Bulldogs for nearly 50 years. Troy now lives and works in Jacksonville, FL, but she lives and breathes Georgia football. As president of the Georgia Bulldog Club in Jacksonville (the largest Bulldog club in the country), Troy also helps give young students the opportunity to go to UGA through the Vince Dooley Scholarship Fund.

Flagpole: Your family has been coming up here for the games for like 50 years?

Troy Bankston: My dad was an All-American swimmer. We still have season tickets and we come for all the games, every game. But we [the younger generations] tailgate with our friends now, and my parents are just, like, they come for just the game, and then they go to the hotel, and then they come back and forth just to go to the game and stuff like that.

FP: And when did you start coming to the games?

TB: Well, my dad has been going [to the games] since 1957–58, and I have been going to the games since about 1965. I was like three years old. And that was back when Stegeman [Hall], when the pool was over here [near the stadium] because that’s where my dad swam was in the pool, and we did the tailgating there. That’s where everyone did their tailgating, was down where the Dawg Walk goes on now, where the Tate Center is. And that was all parking, that was the Georgia parking back then. And so we grew up as kids sliding down that hill, right in front of where the Tate Center is, it goes up. That used to be all nothing but a grass hill. We used to go [tailgating], and it was us [kids] going down the hill the whole time we were here. It was like a big deal.

FP: So, your dad swam for UGA?

TB: My dad, and he still holds records for UGA. He’s on georgiadogs.com. If you go on there and look, he still has records for certain events: freestyle and relays and all that on there.

TB: Jimmy Bankston. He swam for Coach Gabrielsen. He actually swam right here at Stegeman Hall, where the pool was there.

FP: So, it has totally changed since [you’ve been coming here]?

TB: Totally changed. Yeah, we were coming to games whenever the railroad tracks were still behind there. And we would sit there and watch the people who were sitting on the railroad tracks watching the game, and when the train came by during the game—because it always did—the people would have to get up and move their chairs and their coolers and everything and just get off the train tracks long enough for the train to go by. And the train would go by, and they put all their stuff right back on there and sat down and watched the game.

FP: Do you have any favorite memories from all these years coming up here?

TB: I don’t even know what one would be, because I just enjoy all of them. It’s like, we build our memories every single time we come to Athens. We look forward to coming to Athens. Our whole family would come up here way back when it was like Smokey and the Bandit days and all that, and everybody was doing “breaker, breaker” and talking on their CB radios. I mean, that’s how we were. And it was five families that convoyed up. Every weekend, we’d leave Friday morning—early morning, early afternoon—get the kids out of school early. We’d come up and stay at Colonial Inn, right across from the Varsity. We still stay there to this day. We have the same rooms we had even all the way back then, too.

TB: We stay in the same exact rooms, 110 and 111. We book them for the whole season, and they just know the Bankston name. They know we’re in 110 and 111; we’ve always been there. And after the game on Saturday, which is what we’re about to do when we go back to the room, we’re gonna watch the SEC game at night, whoever that is. Tonight that happens to be South Carolina and Kentucky. But our tradition is after the football game ends, for dinner we always go over to the Varsity. So, we’re going to the Varsity to eat tonight. I mean, that’s, like, our tradition. You have to go to the Varsity, you know. We have so many memories. Even though things have changed, we have a lot of memories.

TB: SEC totally, yes. We always root for the SEC. It brings money to our conference in the end whenever we get to bowl time, so we’re always rooting for [the] SEC all the time—you know, except your opponent that you’re playing on that given week. But its all about the SEC. You want the SEC to be the strongest conference.

FP: And when you went to UGA…

TB: And I lived in Rutherford, by the way. And, oh my gosh, just today, I cried coming down here and walking up Field Street because it was the first time it was gone. I mean, I lived in Rutherford, and all my friends, we all lived in Rutherford and Myers and everything and ate at Snelling. It was just, and that was before the parking deck was up and all that. So, it’s bittersweet memories when I walked up that way. I was like, “I can’t believe it’s, like, really gone. It’s totally gone.” It was such a beautiful building—I thought it was—it was historic.

FP: It was all girls when you lived there?

TB: It was all girls. The only co-ed [dorm] was Myers. But I loved it. Back in those days, everyone wanted to be the first one to be in Brumby and all those high-rises. They were promoted, and that’s where they thought the freshmen wanted to be. But the thing was, I never wanted to be there, I always wanted to be on this side [of campus]. And I didn’t ask for it, I just got lucky. Our rooms were so much bigger than the ones in the high-rises. And it wasn’t as intimate. Our [dorm] was more intimate. We had a big social area downstairs with the couches and the chairs and the TV. We’d come in—all the girls would come in the afternoon and try and schedule so they could watch some of their soaps down there. And then we did all sorts of intramural sports, too.