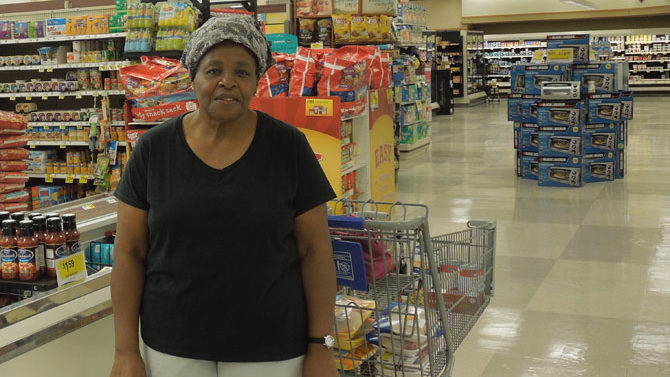 Annie Mathews loves a challenge. That’s what got her involved in her most recent project: restoring an historic one-room schoolhouse for black children at Chestnut Grove Baptist Church on Epps Bridge Pkwy.

Flagpole: You live in Athens. How long have you lived here?

FP: Where were you born?

AM: I was born in Covington, Georgia, and I came here when I was five.

FP: So, you’ve been here for most of your life. What have you done for work around here?

AM: I was head supervisor for a Foamax plant. Most of my life I was supervisor at a plant, or I was a trainer. OK, that’s what I did, and I’m retired right now. I’m doing a lot of work for the church. We’ve got an old, one-room black schoolhouse, Chestnut Grove. It’s over a hundred years old, and we’re redoing it to the 1800s, early 1900s. So, we’re redoing it as it was when they went to school. So, that’s what I’m doing right now.

FP: What church is that?

AM: Chestnut Grove on Epps Bridge Parkway, and that schoolhouse is a one-room black schoolhouse, built in 1884. We’re redoing it, we’re restoring it, just like it was, classroom and all.

FP: How did you get involved in that project?

AM: I don’t know. It just… I just, it was something… Mrs. Barnett—they dead now—they had struggled to get this school done. I wasn’t at that church. I was at Hill Chapel at that time. So, what I did was, I seen this little old, little old teeny lady fighting the city, fighting everybody to get this one-room school house to be saved. So, what I did—they had worked on it and worked on it—and I love a good fight, so I just decided to get involved. Once I got involved, I guess it went six months, six months. And then we got it dedicated and everything. But they dead now and passed on, so I got the torch to carry it on.

FP:   OK, so you have a pretty major role now in these restorations. So, what have you done to preserve the schoolhouse?

AM: What we have done, the Watson Foundation—we won a grant from the Watson[-Brown] Foundation Junior Board, and the grant was that we’re going to repaint it, we going to do the old desks just like they were, and it’s going to be beautiful. Let’s put it like that, it’s going to be beautiful, ’cause a lot of things we’re going to do—the outhouse—we’re trying to get the outhouse done in the back. It’s not going to be to use, it’s just to show. And then the water pump. And, we’re going to invite the city, we’re going to have an open house when we finish. We really, mainly want our children, all the children—black, white, green, purple—we don’t care, all the children, we want all the children, not only there to see it, but we asked the teachers, we want the teachers to prepare the students, to help them feel how it felt to be in a one-room school all day. Just to let them see what the kids had to go through.

FP: How did this project get started?

AM: Well, I don’t know, with the school we were just sitting there after we had it dedicated, and we said—it’s a bunch of, we call the Chestnut Grove School House Committee, I was in charge of it—and we just decided, why not put it back just like it was? You know, that’s how we did—we just got started, about two years ago. Once we seen that Junior Board given history a place foundation—why not apply for it? So, that’s what we did. The first time we got turned down. Then they told us what to do; then we got the grant.

FP: So, that was a difficult process.

FP: Obviously, that’s taken up a lot of your time recently. Do you have any other things you are involved in or hobbies?

AM: Not right now. Because, as of right now, you know, that takes up most of my time. Really, it does. So, when I finish with that I don’t know what I’m going to do. We’ll put it like that.

AM: I’ll probably just take up a part-time job, go back to work.

FP: Going back to your job as a supervisor, what was your daily work like?

AM: Oh, OK, the job was… It’s went out of business; it’s been out of business for a while now. It used to be called Foamax. And we do foam rubber—you bring a design of any foam and we’d design it. My job was to teach people how to run this computer. And not only that, but to oversee the orders, to take out the orders, to have the transfer truck to deliver, to other states and other things… that was my job. Once we’d get it done, we had to do it specifically by the customer order because it was very specific orders. And we’re the ones who first made the tomahawks, the Braves tomahawks—we made them first, we made them first. So, we had the order to do that when they first went to the playoffs—wait not the playoffs, what’d they… yeah, they went to the playoffs—that’s when we first made the tomahawks. That’s what we’d do, any kind of foam, just give us the design and the type of foam and we can make it. We had to run computers, bigger than about half the size of this [points to the red meat case at Kroger], so I had to teach them how to run the computer.

We had one person to program, then I had to program into another programmer. Then I had to teach them how, you know, I had it written down… I found it exciting. I’m the type of person, I love a challenge. I want to be challenged. When I look at children, when I talk to children, I want to challenge them. In other words, I’ll tell them something, then I tell them, make me out a liar. I want you to go look for it, make me out a liar. So, that’s what I want to do, I want to challenge kids.

FP: Getting your part-time job, what kind of challenge are you looking for?

FP: Just a broader question about Athens. You’ve been here a long time and you’ve obviously seen it change.

AM: I have seen it change. In a sense of a way… it’s better. Because, um, now remember now, when I was coming up we had, you know, I had to go to… it was Athens High and Industrial School. But then it changed. So, you know it was just like black here, and Athens High for whites. That’s when I went. But then, when I got out, then they were merged. It was Burney Harris—I don’t know what it is now—but it was Burney Harris, that was the Athens High and Industrial School. So, I’ve seen that change, and I have seen the race relationship getting much better. I really have. But, as I remember, it wasn’t too bad when I was going, it wasn’t outrageous, it wasn’t too bad…

FP: But it was more segregated?

AM: Yeah, it was more segregated. And then now, to see the kids don’t understand how it was then. And so what we want to teach them is that in order to go to the future, you’ve got to build on the past. And that’s what I want them to understand. I want them to understand that. It wasn’t always like this, and it will never be always like that. As a matter of fact, it’s going to change when you grow up, it’s going to change a lot more, and then you can look back and say, “That’s what we did; that’s what we did.”