Black Lives Don’t Matter to Trump; Do They Matter to the Resistance? 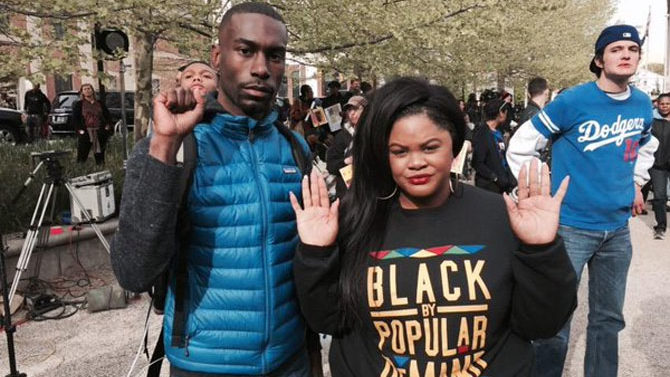 When reporter April Ryan asked Sarah Huckabee Sanders about the failure of authorities in Louisiana to charge the officers who killed Alton Sterling for selling CDs—only days after the police-involved shooting of Stephon Clark in Sacramento, CA—Sanders did the thing that white people have always done to justify killing black people: resort to “local control” or “states’ rights.”

“Certainly a terrible incident, this is something that is a local matter, and that’s something that we feel should be left up to local authorities at this time,” Sanders said.

Maybe another reporter—maybe even a white reporter, because, you know, white reporters can also ask about police killing black people—could have backed her up: “You mean local in the same way that Jefferson Davis did or that George Wallace did?”

But all of the heroes in the White House press corps remained silent. So Ryan asked again. “But how does he feel about that? He was strongly behind police. He supports police as much as America does. But wants to weed out bad policing. What does he say about weeding out bad policing when you continue to see these kinds of situations occurring over and over again?” she asked.

Sanders again invoked a states’ rights argument. “Certainly we want to make sure that all law enforcement is carrying out the letter of the law. The president’s very supportive of law enforcement, but at the same time, in these specific cases, in these specific instances, those would be left up to local authorities and not something for the federal government to weigh into,” she said.

It is as unambiguous as a dog whistle can be. And, in fact, Trump’s Justice Department, run by Klan-loving weed-hater Jeff Sessions, declined to press charges against the officers who killed Sterling back in May. But most of the national press didn’t want to recognize the dog whistle, because to them, Sanders was right. For them, those were “local stories.” And they aren’t interested in local stories.

Neither are their white liberal audiences. There was a noted sigh of relief when the dominant “woke” hashtag shifted from #BlackLivesMatter, which forced us white people to question our privilege, to #Resistance, which means as long as you aren’t as terrible as Trump then you are OK.

Why, nationally, aren’t we talking in the same way about the Movement for Black Lives and the disproportionate number of African Americans killed by police? I called up civil rights activist DeRay McKesson, who came to prominence for tweeting out the uprising in Ferguson, MO after the killing of Mike Brown by Officer Darren Wilson. “When I think about how I have changed in the last three or four years—like my lens towards analyzing what’s going on is that I now understand better the concrete structures in place that exist to almost guarantee officers don’t be held accountable,” said McKesson, who now hosts the popular podcast Pod Save the People.

But, especially under the Trump DOJ, McKesson believes that most change will also happen on that level. “There are 18,000 police departments, and most of the change is local. So we believe that if we get a fraction of the largest police departments to create structural change, that will actually ripple across the other ones,” he said. This ripple effect would work because of the “best practices” doctrine that allows a few endowed institutes or think tanks to design policy not only for policing, but for most industries.

McKesson both echoes Sanders’ deflection and turns it back on her. Still, he recognizes that, in a situation like the Gun Trace Task Force trial in Baltimore, where eight cops were charged by the feds with widespread corruption, no one on a local level was equipped to deal with it. “It was surprising; it was like the layers and layers of people and city government that had to know about this and chose to do nothing,” he said. “There was no mechanism at the city or state level that was there to do anything.”

This is the paradox. The right has, for a long time, seen the fight as local. They have been taking over school boards and other minor positions. But now that Trump is attempting to destroy much of the federal government, the serious work of the left is going to have to turn largely local, while all of the #Resistance pats themselves on the back as they wait for Mueller to save them. Or Stormy Daniels.

Meanwhile, local newsrooms are gutted every day. The new alt-weekly I helped found lasted only a few months before the funders pulled the plug. And the national news is just not interested in the local fights, because they are obsessed with Trump.

“Donald Trump handles these nitwit reporters with a new and most disgraceful form of bribery,” the great reporter Jimmy Breslin, who died last year, wrote in 1990. He saw what was happening. “The scandal in journalism in our time is that ethics have disintegrated to the point where Donald Trump took over news reporters in this city with the art of the return phone call.”

Trump no longer returns the calls. He doesn’t have to. He has Twitter, and we have all become suckers, obsessing over a national soap opera, where the real change—for good and ill—is happening under our noses, in our own towns.