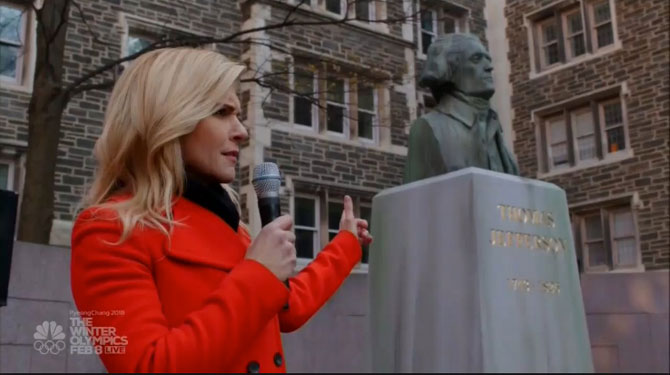 A recent episode of the seemingly eternal crime drama “Law & Order: SVU” featured an Ann Coulter-like figure—she had a name in the show, but let’s call her Ann Fauxlter—who was raped with a protest sign in a “riot” on a college campus in New York (the fictional Hudson University). The “ripped-from-the-headlines” show engaged in a bit of both-sides-ism worthy of Schrodinger’s cat. At first Fauxlter claims that an anti-fascist activist wearing all black and a mask raped her. Tracking down leads, the “liberal” cops and prosecutors come to suspect a small-handed alt-right troll whose advances she spurned the night before.

SPOILER ALERT: In the end, it never says who raped Fauxlter, but it pushed hard the general establishment consensus that “both sides”—antifa and the alt-right—are equally bad.

Recent events show, again, that this is B.S.—especially in the show’s depiction of police officers and prosecutors who are more sympathetic to antifa than the alt-right. Last week, Attorney General Jeff Sessions praised the role of sheriffs in the “Anglo-American” tradition of law enforcement. As so often with Sessions, the phrase was a dog whistle. He could defend his position and note that the position of sheriff originated in England—think Sheriff of Nottingham—but the racists would hear that he supported them.

In contrast to Sessions, James Comey—the FBI director that Sessions fired over the Russia investigation—gave a speech in 2015 noting that, “All of us in law enforcement must be honest enough to acknowledge that much of our history is not pretty.”

The Anglo-American tradition of law enforcement has been one of white supremacy for much of that history—and police departments and sheriff’s offices around the country are still trying to grapple with that.

When the CBS news show “60 Minutes” interviewed recovering racist Christian Picciolini a few months back, he talked about how skinheads made a conscious decision to clean up and join law enforcement. “You know 30 years ago, we were skinheads,” he said. “We wore swastikas and shaved heads, and you could identify us pretty easily. So we decided at that time to grow our hair out, to trade in our boots for suits, and we encouraged people to get jobs in law enforcement, to go to the military and get training and to recruit there.”

But one of the first things the Trump Administration floated upon coming into office was changing the name of the Countering Violent Extremism program to “Countering Islamic Extremism” and eliminating a focus on white supremacist terror groups. At the same time, they were ramping up a prosecution of 200 people arrested in an anti-capitalist, anti-fascist protest of Trump’s inauguration. More than a year later, 59 people, including a journalist, are still facing decades in prison for wearing black clothes near a “black bloc” action where a few windows were broken.

At the same time, right-wing terror is on the rise. The same week that “Law & Order: SVU” aired its “Info Wars” episode, the Southern Poverty Law Center released a new report showing that individuals who were associated with or influenced by the alt-right killed 17 people in 2017. That doubled the number from the previous year.

Nikolas Cruz killed that many people in one day when he went on a shooting rampage at Marjory Stoneman Douglas High School in Parkland, FL last week. More information about his motives will surely arise in coming days, but the leader of Republic of Florida (ROF) told the Anti-Defamation League, which identifies ROF as a white supremacist group, that Cruz had trained with the group. ROF leader Jordan Jereb soon started trying to distance himself from his earlier statement, blaming the “Jew media,” and the ADL posted an update saying that one ROF member had called the claim an elaborate plot to troll the media. Police found no evidence that Cruz was involved with the group.

But that doesn’t mean white supremacists aren’t a threat to our security. Late last year, William Edward Atchison, who frequently posted on sites like Daily Stormer, killed two students at Aztec High School in New Mexico. When the FBI visited him in 2015, after he had posted about trying to find a weapon for a school shooting, they concluded that he wasn’t a threat.

The FBI had apparently been warned by a YouTube vlogger that someone with the name Nikolas Cruz posted “I’m going to be a professional school shooter” on his page.

The sheriff’s office in Leon County, FL says it has not been able to find any concrete ties between Cruz and ROF—and Jereb may have just been trying to gain attention by claiming the horrendous actions of the MAGA-hat-wearing murderer.

Still, it is clear that the racist, misogynist ideology of the alt-right is a serious threat, and that threat is enhanced when it is equated with anti-capitalist property destruction. The white supremacist violence in Charlottesville, VA was able to reach the level it did because law enforcement stood around the mall across from Emancipation Park, protecting the windows of restaurants and stores from antifa protesters, instead of protecting people from the Nazis who, leaked communications show, were clearly set on violence.

But we know that the FBI and Homeland Security are actively monitoring people who are inspired by a “kind of an antifa ideology,” according to FBI director Christopher Wray, and is actively investigating “black identity extremists.” So when our popular culture starts to mimic Trump and right-wing memes, declaring “both sides” are bad and adding the layer that law enforcement somehow sympathizes with antifascists, it adds yet another dangerous layer to our already deeply toxic political discourse about violence, race and law.