Project Falsitas: The Far Right (and the Government’s) Break With Reality 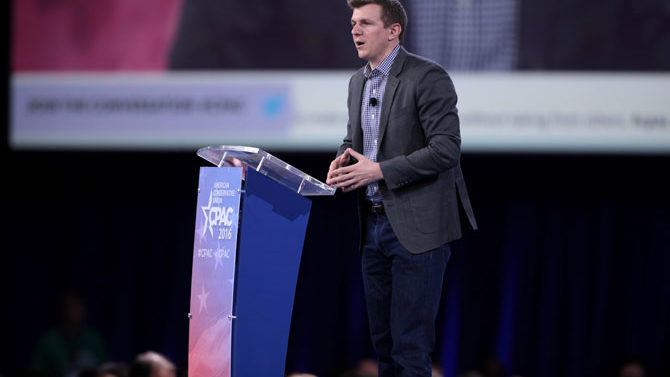 Project Veritas, the creepo undercover right-wing sting team run by James O’Keefe, spent months trying to fool the Washington Post into printing false accusations against theocrat and alleged pedophile Roy Moore in order to undermine the real allegations made by women that he was sexually inappropriate with them when they were minors. Moore, a twice-deposed former judge, is the only man alive who might make Luther Strange and Jeff Sessions, the two previous occupants of the Alabama Senate seat he is vying for, look almost normal.

Jaime Phillips, the woman trying to claim that Moore impregnated her when she was underage and then urged her to have an abortion, was spotted by Post reporters walking into the offices of Project Veritas. They confronted her on cameras of their own. “The Washington Post seems to want a Nobel Prize for vetting a source correctly,” O’Keefe later said in response.

On the same day the Post story broke, prosecutor Jennifer Kerkhoff introduced a Project Veritas video into the trial of the first six of the 193 to be charged under the federal Riot Act for protesting during the inauguration. It came during the testimony of an undercover officer who infiltrated a Jan. 8 meeting in a church where various groups coordinated Inauguration Day activities. Kerkhoff asked the officer if he recorded the meeting, and he said his supervisors told him not to. But, he said, police later obtained a video of the same meeting.

“I’m not aware of any edits or anything,” Kerkhoff said in court. When the judge asked her who provided the video to police, she replied: “a third party.”

Even worse, we don’t know how many Project Veritas operatives were in the room, saying things that may have colored undercover officer Bryan Adelmeyer’s perception of the events. So it taints his testimony as well. Despite the Veritas in its name, O’Keefe’s organization is built on deceit—and may in fact lose nonprofit status in New York because he failed to disclose his criminal record for using false premises to enter a federal building in an attempted Watergate/“Bob the Builder” cosplay self-sting.

By contrast, Alexei Wood, a photojournalist who is one of the defendants in the current trial, is almost radically transparent about the livestream video, which occupied much of the motion hearings over the past several months, that he filmed during the protest. “I didn’t do anything wrong. I livestreamed myself from beginning to end, and the entire world can decide whether I incited a riot,” he said. “It’s out there for the whole world to decide, and I’m glad it is.”

The government, on the other hand, is not only using Project Veritas’ unauthenticated video, but they actually edited the videos in order to obscure the identity of the still-unknown Project Veritas operative, as if he were an officer.

This is further evidence of the deep connection between law enforcement, government officials and right-wing movements. We know that an MPD communications officer provided a list of names of the defendants to far-right conspiracy site Got News. And video obtained by The Real News shows a U.S. Park Police officer in D.C. ordering a protester to follow the orders of a militia member because “he works for me.”

In July, an officer from the guns and drugs “powershift” unit of the 7th was photographed wearing—and may have designed—a T-shirt with a grim reaper, white-power symbols and “Powershift,” “Seventh District,” “MPDC,” and “let me see that waistband jo”—this last a reference to searching inside the underwear of citizen in “jump out” corner-clearing drug busts.

These D.C. guys have the same view of policing as Trump, who urged officers to be violent with suspects—or at least not to shield their heads when putting them into a car or van. And Trump, of course, also tweeted false, O’Keefe-esque videos from Britain First in an attempt to stoke anti-Muslim sentiment, or as Sarah Huckabee Sanders put it, “elevate the dialogue.” So it is no surprise that federal prosecutors in D.C. are willing to stoop as low as O’Keefe to further their dissension of protest.

He was later accused by one of his own operatives of drugging her when she refused his romantic overtures, and then enlisting an army of right-wing trolls, including her former friend Andrew Breitbart, to harass her when she tried to expose him. (Listen to this week’s podcast with Chris Faraone, Dig Boston editor and author of I Killed Breitbart, for more on this.)

But, as Moore’s campaign shows, that’s the way the far right works now. If you’re on their side, they will defend almost anything. A couple weeks ago, I wrote a story for The New York Times arguing that Charles Manson was alt-right. “Charles Manson wasn’t the inevitable outgrowth of the Sixties. If anything, he was a harbinger of today’s far right,” the Times Op-ed page tweeted with a link.

Laura Ingraham, the far-right radio host who appeared to give a Seig Heil to Trump at the RNC last summer, tweeted a response. “‘Far right’? You mean ‘right so far,’ as in @realDonaldTrump has been right so far abt how to kick the economy into high gear.”

Ingraham’s tweet is the perfect emblem of the senseless mass prosecution of protesters. It is senseless.

And maybe that is why Trump retweeted it.

Baynard Woods is a reporter at The Real News. Email baynard@therealnews.com. Twitter @baynardwoods.