The Real Heroes in the Global Fight Against Fascism 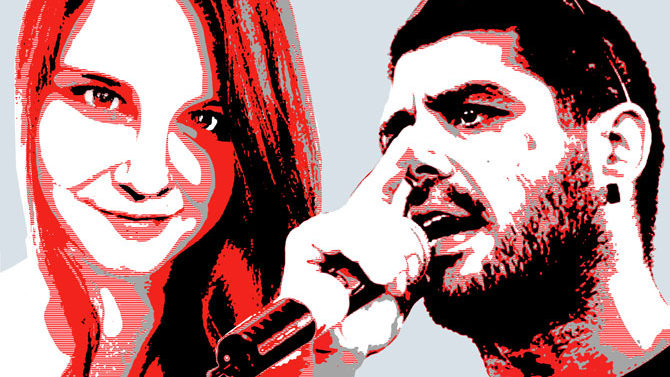 A couple weeks ago, when tens of thousands of Polish fascists marched in the streets, a smaller group of anti-fascists confronted them, many carrying images of slain Charlottesville anti-fascist Heather Heyer. Heyer’s image also adorns walls in Exarchia, the anarchist neighborhood in Athens, Greece where 3,000 protesters took to the streets in September, marching to the U.S. Embassy to honor Heyer.

In the United States, we don’t know how to honor the martyrs of our political movements as well—we don’t have as much experience. It’s also tricky. Heyer’s mother, Susan Bro, told The Guardian’s Lois Beckett that she did not want a park in Charlottesville to be named after Heyer. “Everyone who knows Heather knows that she hated statues of any kind,” she said.

“I think it’s a damn shame that a white girl had to die for people to have to pay attention,” Bro said of the spotlight her daughter’s death has cast on racism and the rise of fascism in America.

When the Greek protesters marched to the U.S. Embassy to honor Heyer, they were also commemorating the 2013 murder of anti-fascist rapper Killah P (whose real name was Pavlos Fyssas) by members of the fascist group Golden Dawn, which is both a paramilitary-style criminal organization and a political party.

One of their black-shirt “security” groups came to Fyssas’ working-class neighborhood in Athens in order to “sow terror,” according to the group Jail Golden Dawn. Fyssas stood up to them. He was surrounded by a number of black-shirted Golden Dawn operatives with sticks. He fought them in hopes that his friends could escape. Then Giorgos Roupakias, a member of the party, allegedly came up and stabbed him.

“The attacks were tactical, launched by two or three people at a time,” Pangiotis Fyssas, Pavlos’ father, said in the subsequent trial. “I don’t know how long this lasted. Until the professional killer Roupakias showed up.”

Roupakias is among several Golden Dawn members on trial for the murder of Fyssas. The leaders claim he was a rogue actor not really affiliated with the party. Some have even claimed he is a communist infiltrator—all of which should be familiar from our own fascists’ attempt to distance themselves from James Alex Fields, Heather Heyer’s killer.

Like American Nazis, the Golden Dawn fascists claim they are being prosecuted for their ideas—”free speech,” as Richard Spencer and his racist comrades have put it. But in Greece, the group’s leader and some of its parliamentary members are also facing charges for belonging to a criminal organization involved with the murder. “They are being tried as a crime syndicate for: homicides, attempted homicides, serious intentional physical injuries, explosions, robberies, blackmail, possession of firearms and explosives, drug law offenses,” Golden Dawn Watch, an anti-fascist group monitoring the trial, wrote in a recent post.

When asked why his son was killed, Fyssas testified, “Because this organization silences the voices that oppose it. His songs were anti-fascist, and this annoyed them.”

Fyssas’ mother said that “he had ideas and principles. He wrote what he believed in his songs. Before he died, he had taken to helping the homeless. He helped, he was clean, a free spirit with principles; those were his only weapons.”

She was asked whether his music bothered anyone. “Yes,” she testified. “Their anti-fascist and anti-racist content did. He wanted to educate younger people.”

When the trial began more than two years ago, it was dubbed “the trial of the century.” Now, people joke it may last that long. But Golden Dawn Watch argues that, though the trial is slow, the system is working. Golden Dawn has “ceased violent criminal activity [and] removed the terrorist battalion from the street. The parliamentary mantle can no longer cover the odious face of the neo-Nazi organization. The trial frightens the leadership of the [Golden Dawn] and exacerbates the contradictions within it.”

This is the same kind of slow work we see happening in the U.S. as anti-fascists and reporters expose the racist dealings of fascist groups. But it is has been a hard fight. In the U.S., as in Greece, a great many law-enforcement officers sympathize with the far right.

While more than 200 people are on trial for protesting Trump’s inauguration, there are no similar conspiracy charges against Vanguard America, the group to which Heyer’s killer belonged. Instead of prosecuting the white nationalist groups to which terrorists like Fields belong, Trump and the American far right are inspiring fascists around the world.

“Trump’s policies have given us a new wind of support,” Elias Panagiotaros, a Golden Dawn MP, told The Independent. “It’s validating and reinforcing our nationalistic and patriotic policies… We should reclaim our country and our interests and put them first, just like Trump.”

The 60,000 fascists in Warsaw marched under a banner that read “We Want God,” a phrase from a Polish patriotic song that Trump recently quoted. Other signs called for a “white Europe” and an “Islamic holocaust.”

Fascists see this as a global struggle, as they did before World War II. In honoring Heyer, European anti-fascists are helping us see the same thing. But while American liberals hate Trump, they have yet to become actively anti-fascist and often demonize the real resistance as extremist. They call themselves the “Resistance” but fail to acknowledge the examples of Fyssas, Heyer and the activists facing decades in jail for organizing against Trump. In order to become a real force, this so-called “Resistance” against Trump needs to recognize its heroes and take its villains seriously.