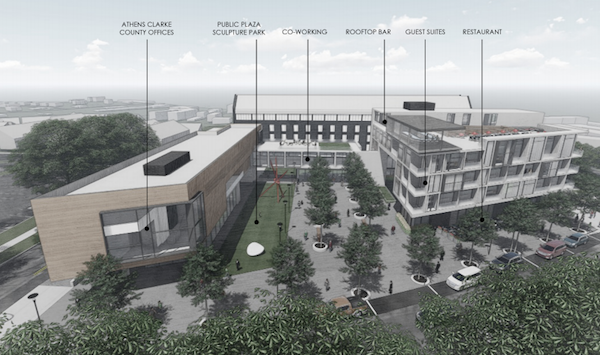 The Athens-Clarke County Commission voted Tuesday night on the framework of a potential deal to sell Strong Street and a city-owned parking lot between Strong and Dougherty Street to Hotel Indigo for a development that will include hotel rooms and office space.

The deal calls for ACC to sell the property to Athens Hospitality Holdings LLC, the company that owns Hotel Indigo, for $3 million. Athens Hospitality Holdings would then build a new five-story development on the property that would include 45 hotel rooms; office space for the ACC Economic Development Department; 8,000 square feet of meeting and event space; 7,000 square feet of coworking space where entrepreneurs and startups could rent desks, offices and conference rooms; a street-level restaurant; a rooftop bar and 60 underground parking spots. Strong Street would be closed and converted into a courtyard.

ACC would pay the Hotel Indigo Group $2.4 million for 10,000 square feet of office space within the new building, according to Ryan Moore, director of the Economic Development Department.

In addition, lead investor Rick Fine would create a $3 million fund to invest in Athens startups. ACC would contribute $25,000 annually to the fund, possibly in the form of in-kind administration.

The Athens Downtown Development Authority, which manages the parking lot, had considered putting the property up for bid in cooperation with ACC, hoping to land a developer who would build offices rather than more student housing. But before that happened, the Hotel Indigo group made the county an unsolicited offer.

A consultant’s study found that Athens can capitalize on UGA and a growing tech industry but lacks office space. At the same time, the Classic Center expansion has created a need for more hotel rooms downtown. A local development group is nearing completion on a Hyatt Place connected to the Classic Center. Benson’s Hospitality Group, which owns the downtown Holiday Inn, is building a SpringHill Suites next door to that hotel. And a Homewood Suites is under construction near The Mark, the student housing complex off Oconee Street.

The JFK Cover-up Continues, But the Truth Is Seeping Out

The Lil’ Ice Cream Dude Is Getting His Own Store