The Proud Boys and the Litigious ‘Alt-Lite’ 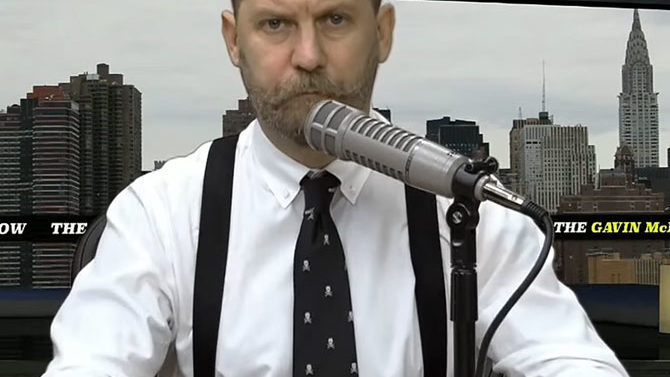 After last week’s column, we got a cease and desist letter from the Proud Boys’ lawyer, complaining that we described the “western chauvinist,” “far right” “fraternity” as “alt-right.”

He took issue with this sentence: “‘Western civilization’ is often code—for people like Bannon and the alt-right fraternity the Proud Boys—for whiteness. But it is less offensive and less likely to scare away potential converts.”

“The Proud Boys were founded by Gavin McInnes in 2016. The Proud Boys and Mr. McInnes do not now, nor have they ever, espoused white nationalist, white supremacist, anti-Semitic, or alt-right views,” wrote the lawyer, also a Proud Boy, Jason L. Van Dyke.

This is part of an aggressive post-Charlottesville branding operation by the Proud Boys, whose founder, McInnes, also one of the founders of Vice Media—he left in 2008—is obviously pretty media-savvy. But Van Dyke proves precisely the point of the column, which argued that Breitbart and similar organizations that do not overtly espouse racism act as bridges for racists.

Jason Kessler, the organizer of the Unite the Right event that led to a terrorist attack in Charlottesville, VA, was a former Proud Boy. McInnes kicked him out and says he was never really a Proud Boy, although he was “initiated.” In this, the Proud Boys are, ironically, a lot like Stalin: If a Proud Boy does something that makes the group look bad, he wasn’t ever really a Proud Boy in the first place.

In a post titled “Proud Boys Are Not Alt Right,” McInnes asked, “WHAT IF I SEE PROUD BOYS AT AN ALT-RIGHT RALLY?” The answer is: “You don’t. You either see someone who used to be a Proud Boy or someone who is dressed the same as us.”

But whatever Kessler’s official status with regard to Proud Boys membership, he spent his speech at the Friday-night torch rally before Unite the Right talking about the concept of “white genocide,” which was also the point of the chant “you will not replace us,” which morphed into “Jews will not replace us.”

McInnes may try to disavow racism, but he has espoused the concept of white genocide, as in a tweet where he quotes a spurious Infowars article about aborting white babies to end racism and adds “this attitude + immigration = white genocide in the west.” Another prominent former Proud Boy who guest-hosted McInnes’ show, Salvatore Cipolla, likes to retweet and be photographed with former KKK grand wizard David Duke, and calls himself “alt right” and “Super Proud Boys 2” on his Twitter bio. McInnes himself often says racist, sexist and homophobic things. “10 THINGS I HATE ABOUT THE GODDAMN MOTHERFUCKING JEWS!” he once ALLCAP tweeted with a link to a video.

“I’m becoming anti-Semitic,” McInnes said in a talk that bordered on Holocaust denial. But when Duke approvingly tweeted at McInnes, saying, “Holodomor was Ukrainians. I think it was ten million Ukrainians who were killed. That was by Jews” (and linking to a site called “alt-right news,” which said McInnes has gone “full 1488,” an online code for Nazi), McInnes responded, “Fuck you. You’re talking about a clip out of context that includes the words, ‘Don’t take this out of context.’ Stalin did it. Not Jews.”

Like white dudes everywhere, McInnes is the only one who can define himself, while he spends all his time defining everyone else. His disavowal of the term “alt-right” also shows just how ridiculous these “free-speech-loving” right-wingers are. The right spent eight years playing incredibly fast and loose with political differentiation on the left as they called the centrist Obama a socialist, but it’s gotten even worse now.

On the same day he sent the letter to our papers, Van Dyke tweeted, “I respect that Bernie at least admits he is a socialist. The rest of the left is too cowardly to admit that they are Marxists,” to his 236 followers.

And yet, the “far right” “Western chauvinist” snowflakes expect everyone else to micro-parse the differentiations within their movement. For a while, “alt-right,” even though it was coined by Richard Spencer, was generally used to mean the right-wingers who are culturally “alternative” to the stuffed shirts like Mitch McConnell. (As alt-weeklies, we’ve often noted how much we hate it that they use our prefix.) Of course, the Proud Boys’ militant wing, headed up by Based Stickman Kyle Chapman, is called the Fraternal Order of the Alt-Knights—so, you know, they’re not encouraging alt-right associations at all.

Proud Boys are also quite misogynistic. McInnes once tweeted: “Every guy I’ve ever known to be involved in a ‘domestic’ was the result of some cunt trying to ruin his life.” If you want to hear more about this and their “no wank” policy, listen to Zoe Chace’s great “This American Life” story on them.

When they say “Western chauvinist” instead of “racist,” they say they are claiming only “the West is the best,” and not that white people are the best. They often point out their few minority members. They think they may be able to draw these lines wherever they want and separate themselves from the “alt-right.” They think they can control the narrative.

A lot of the publications decided to change the word “alt-right” to “far-right” or something similar in order to avoid spending time and legal fees debating this. I myself feel like “the litigious alt-lite” is now a far more more accurate phrase for these guys, like Mike Cernovich and all the other people who want to be able to say hateful things while simultaneously denying they are hateful people. So, consider this a correction.