Umbrellas and Antifascists: What a Russian Novel, the JFK Assassination and Catalonia Have in Common

A few moments before Sens. Richard Burr and Mark Warner, chairman and vice chairman of the Senate Intelligence Committee, respectively, came out to present an update on their investigation into Russian attempts to interfere with the 2016 election, a man walked out carrying a large cardboard sign—not a protest sign, but the clip-arty press-conference explainers that are always terrible but expensive-looking.

The board laid out the extent of the committee’s investigation—they interviewed more than 100 people for more than 250 hours in 11 open hearings. Then, with a clip-art picture of a book, it says “100K PAGES of Documents Read” and below that, with no real explanation of the link: “80+ COPIES of War and Peace.”

As it turns out, that was the most interesting part of the presentation, which was, essentially, like a news report that brags about how much reporting was done, without actually telling the story. There was no new information.

I kept wondering if there was some hidden meaning in the poster. It was, after all, an example they were using in their hearing on Russian hacking. Given the paranoia surrounding Russian meddling, the War and Peace reference makes it seem as if even Tolstoy was in on the scheme.

Maybe some staffer made an inside joke, or more likely, it was just because War and Peace is a long book.

But as I stood in the back of the crowded briefing room listening to the senators take credit for the work their staffers were doing, I couldn’t help but stare at the clip-art book beside War and Peace and ponder how, when you look at something too long, it splinters into millions of micro-realities. I found myself thinking of The Umbrella Man, Errol Morris’ mini-documentary about a man who was seen in the footage of the crowds along the motorcade route in Dallas on the day that Kennedy was assassinated.

The film starts with a man in a black suit, holding an umbrella, walking. It cuts to Josiah Thompson, who made Six Seconds in Dallas, a film examining the assassination in great detail, explaining the Umbrella Man. “And then I noticed in all of Dallas there appears to be exactly one person standing under an open black umbrella, and that person is standing where the shots begin to rain into the limousine,” he says. “Can anyone come up with a non-sinister explanation for this?”

Every sort of conspiracy sprang up. In a New Yorker “Talk of The Town” piece in December 1967, John Updike offered a philosophical rumination on the Umbrella Man and Thompson’s micro-examination of the photographs and films of Dallas that day. “It’s as if there’s the macro level of historical research where things sort of obey natural laws and usual things happen and unusual things don’t happen, and then there’s this other level where everything is really weird,” Thompson says in the film, paraphrasing Updike.

In Updike’s piece, he ends the passage that Thompson cites by declaring that the search for the truth about the few seconds when Kennedy was killed “seems to demonstrate how perilously empiricism verges on magic.”

It seems like everyone is lost in some form of magical thinking at the moment, digging deep into their favored minutiae and ignoring everything else.

When Thompson found the man with the umbrella, he came to testify before the House Select Committee on Assassinations. “He explained then why he had opened the umbrella and was standing there that day,” Thompson said. “The open umbrella was a kind of protest. A visual protest. It wasn’t a protest of any of John Kennedy’s policies as president. It was a protest of the appeasement policies of Joseph P. Kennedy, John Kennedy’s father.”

The Umbrella Man was an anti-fascist activist. 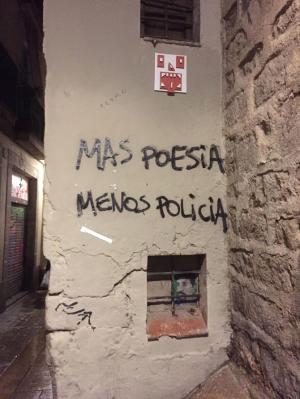 On Nov. 22, 1963 in Dallas, it was not raining. In Washington, DC on Inauguration Day, it was. If someone is spraying you with pepper spray, and you have an umbrella, and you don’t use it, you are insane.

The world saw the same kind of storm-trooper police violence that was used against the inauguration protesters during the Catalonian referendum a couple weeks ago. People there are deeply anti-fascist. I was there reporting on the cannabis clubs just before the inauguration, and many people I talked to linked the clubs, which they consider associations, to the anarchist collectives during the long, fascist regime of Franco. For them, a government that tells you that you can’t associate or do what you will with your own body is fascist.

Anna Obradors, a consultant I talked to, was convicted last week for drug trafficking for working in one of the clubs. It was, she says, devastating. But the larger political situation is just as frightening.

“It’s scary,” she wrote me. “Spanish state is about to send the army here if the independence is declared on the coming days… and it doesn’t seem Europe will be helping… after a century we feel somehow like our grandpas did [in] 1936… weird and scary.”