Class and Costumes Bring Juggalos and Antifa Together at DC Rallies 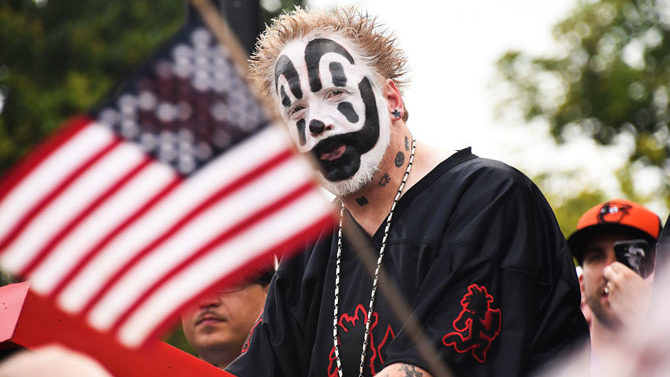 The political heat of 2017 has finally boiled all the political chants down to their essence: “Fuck that shit!”

More than 1,000 juggalos—fans of the horror/art rap group the Insane Clown Posse (ICP)—chant this perfect refrain for our insane era in front of the Lincoln Memorial on Saturday, Sept. 16. Many of them are wearing clown paint on their faces or sporting tattoos or other signs that they are down with the clown.

Farris Haddad, who was introduced as “the motherfucking juggalawyer,” is speaking when the chant breaks out for probably the fifth or sixth time. “We’re talking about freaking music here. If this is allowed to stand, and so far it has been, then we definitely don’t live in a free society anymore,” he says.

He’s talking about the fact that the FBI has designated the juggalos as a “loosely organized hybrid gang”—a 2011 designation, which, juggalos say, has real consequences. One speaker at the rally, Jessica Bonometti, told how she was fired from her job as a probation officer in Virginia because she liked ICP-related photos on her personal Facebook page. Another, Crystal Guerrero, said she lost custody of her children for going to an ICP show.

So Haddad, as juggalawyer, is trying to sue the FBI.

“The Federal Court in Detroit actually tried to dismiss our case twice now saying basically that the FBI did nothing legally wrong by gang-listing thousands of normal everyday Americans,” he says.

“Fuck that shit,” the crowd roars.

As Haddad tells the crowd that there is a new trial date, on Oct. 11 in Cincinnati, Chris Lopez, a man with a van dyke beard, long hair, and a D.A.R.E. baseball hat walks up and hands a sweatshirt and a sandwich to Michael Troy, who wears a suit and a red toboggan hat and sports a handlebar mustache.

They do not know each other.

“He’s like a brother I never met before,” Troy says, taking a bite of his sandwich.

“I give sandwiches to everybody,” Lopez says, opening up a cooler and showing me a couple dozen sandwiches.

“He gave me a jacket, too, because it’s gonna get cold later,” Troy says.

Troy came from California on an overnight flight on Friday night and is planning to leave Sunday morning. I ask him why he felt it was worth so much trouble and money, which for most people here is scarce.

“It’s my family,” he says. “Family has family’s back no matter what. They are there for each other in times of need.” 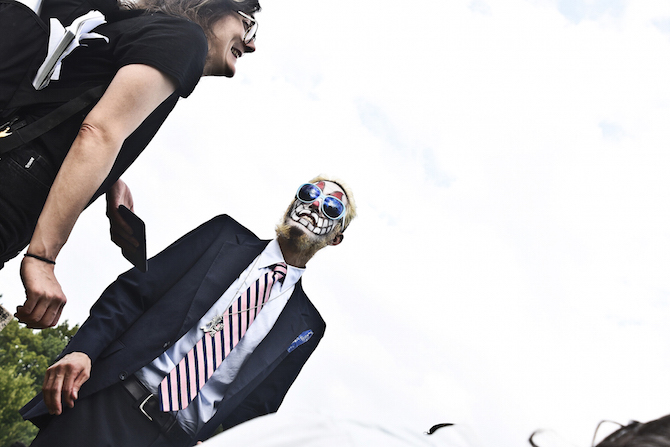 Maybe it is the California contingent that wears suits, because a guy from Oakland who calls himself Ape also sports a suit beneath his clown makeup. He is part of a group called Struggalo Circus, which describes itself as “a ragtag and messy coalition between radicals and juggalos.”

One of Ape’s comrades, a black man, carries a sign that reads “Black Juggalos Matter.” There weren’t that many black juggalos. But, many juggalos and their supporters feel that class is at the center of the campaign against them.

“If juggalos are a gang then why aren’t individual fraternities gangs?” says writer Camille Dodero at the rally. “What’s the difference between those groups and juggalos? To me… the difference with those kids is that those kids’ parents have money.”

A helicopter flies over. Everyone starts to hold up their hands and shoot it big old double birds.

“Most juggalos I know don’t have parents with money,” Dodero says. “In some cases you don’t even have parents.”

Maybe I should have mentioned this sooner, but there’s another rally going on at the same time, on the other side of the Mall. Organizers disastrously dubbed it the Mother of All Rallies—even though they were significantly outnumbered by the juggalos. But with the exception of the Proud Boys, they don’t look like the fraternazis with rich parents.  Bikers for Trump, Three Percenter militia-guys, 4chan Kekistan shitposters, and Captain America cosplayers, each of which, like juggalos, is distinguished by its uniform. The militia guys, for instance, wear Under Armour camos and backpacks (and had guns in Charlottesville) and the “Western chauvinist fraternity” Proud Boys wear black polos with yellow stripes on the color and the sleeves. And Captain America, well…

Pretty much all of the groups somehow see themselves as “security.” They are there to protect the free speech of Trumpists from the media and the dreaded Antifa. It is mostly just them and the press, though, so when a couple antifa activists walk up to use the portajohns, a palpable thrill goes through the crowd. Finally! These speakers suck! What are we even here for! Antifa!

The activists are quickly surrounded by Park Police and then by militia guys.

As Drew Ambrogi, who works with No Justice No Pride, tries to get close to the counter protesters, one of the militia members tells him to step back. “You’re not a law enforcement officer,” Ambrogi says.

“They work for me,” a U.S. Park Police officer says of the militia man.

But when Proud Boys come up looking like they want to fight, it seems like the militia managed to calm them down and keep them away (they won’t talk to me).

That’s when something kind of amazing happena. Inside this circle, one of the antifa activists named Iggy, stands and talks for nearly an hour with one of the leaders of the militia.

“It’s a divide and conquer,” Iggy says. “There’s not that much difference.” Some Antifa groups, like Redneck Revolt, have been actively reaching out to the militia groups.

“A diversity of tactics,” Iggy says later, at the juggalo march, where the presence of a black bloc made some people nervous. “These people, they’re not fascists. They’re definitely trying to distance themselves from the fascist movement.”

He says that the further alienated these militia-types are, the more likely they are to side with the fascists.

At one point, as the Juggalos march, they chant, “One of us! One of us!”—a reference to the 1932 film Freaks. The juggalos, Antifa and the militia are all freaks. All three groups are hated and feared by the average Americans, the normies. But there are still very real differences. 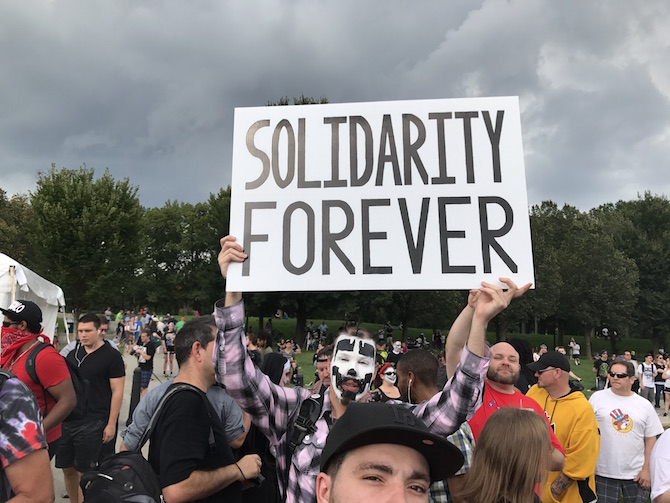 A couple hours later, as the juggalos march and a black bloc of antifa activists, with their faces covered, carry a sign that reads “Whoop Whoop Fuck Nazis,” I am overwhelmed by the sense that all of these competing rallies and their attendant fashions are the essence of our spectacle-oriented politics. If you dress in black you may be called a terrorist, and if you wear clown paint or the hatchet man, you may be classified a gangster.

But if you dress in a militia uniform, the cops will likely claim you as their own.

And, we are reminded again, as protests continue in St. Louis, if you are wearing a police uniform, you can still shoot black people and walk free.

After Their Last Easy Win of the Year, the Dawgs Look Ahead to Mississippi State