After Their Last Easy Win of the Year, the Dawgs Look Ahead to Mississippi State 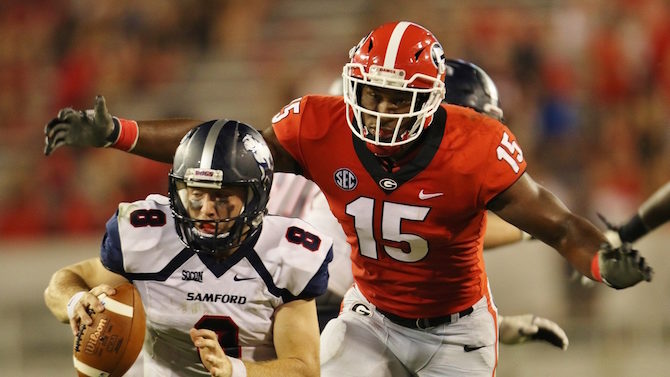 The next month will go a long way toward determining whether or not Georgia will wear the SEC East crown. This Saturday, Mississippi State travels to Athens for yet another game under the lights. State always seemed like a team that could present a few problems for UGA as the Dawgs open their SEC schedule next week, but it wasn’t until MSU’s 37-7 blowout of LSU Saturday that UGA fans sat up and realized how dangerous this contest is.

Even though Mississippi State is outside the East, and so a loss won’t mean they’ll hold a tiebreaker over Georgia, this game will go a long way toward showing whether the Dawgs have what it takes to handle their business in the SEC. There’s a strong argument to be made that the other Bulldogs are the second-best team in the SEC, after Alabama, and the toughest game remaining on Georgia’s schedule.

I’ve had my suspicions all offseason that State would be a tough out and that fans should be as concerned with them as they were with Notre Dame. But those suspicions weren’t confirmed until this weekend. The other Bulldogs do two things well that will give Georgia and any other team they face fits: run the ball and stop the run.

To stop Mississippi State, Georgia must stop its quarterback, Nick Fitzgerald. Fitzgerald isn’t only the best quarterbacks in the conference, he’s also one of the best runners. And, no, I don’t mean running quarterbacks. The junior from Richmond Hill, Ga. totes the rock like a tailback. Last season, he was second in the SEC in rushing, racking up an eye-popping 1,375 yards at 7.1 yards per carry and 16 rushing TDs. He’s been less prolific on the ground this season, with 240 yards rushing through three games, but he’s still averaging more than 7 yards a carry and has five rushing touchdowns to his name, on top of 543 yards passing and a 7:1 TD-to-interception ratio.

One of MSU’s biggest flaws last season was that they had to rely on Fitzgerald for most of their rushing production. This season, the team has been able to count on tailback Aeris Williams. The junior already has nearly half of the rushing yards he had last season, with 336 yards so far, more than 110 per game. Against LSU, he ran for 146, taking a lot of pressure off Fitzgerald.

The good news for Georgia is that the defense has already proven itself capable of stopping running quarterbacks and productive tailbacks. UGA’s nasty front seven limited Notre Dame QB Brandon Wimbush to one yard rushing and tailback Josh Adams to 53. This weekend against Boston College, Wimbush and Adams both ran for more than 200 yards.

On the flip side, MSU’s defense dominates against the run, which could spell trouble for Georgia’s stable of talented backs. MSU’s defense is allowing an average of 101 yards on the ground per game, and limited LSU’s Darrius Guice to 76 yards. Say what you will about Todd Grantham—and I know Georgia fans have plenty to say about him—but he’s assembled a good defense at MSU.

That means Georgia will need to count on the passing game to make the offense tick. It remains to be seen whether or not Jacob Eason will be back for this game. (Personally, I don’t think he will be.) But he or, more likely, Jake Fromm will need to be on top of their game and provide big chunks of yardage through the air to make up for any loss of production on the ground.

There are still plenty of landmines left for UGA—trips to Auburn and Tennessee, and the always wonky tilts with Florida and Georgia Tech, to name a few. But if Georgia beats State convincingly, we can start whispering about the possibility that the Dawgs run the table.

Yeah, I went there.

Class and Costumes Bring Juggalos and Antifa Together at DC Rallies