Charlottesville and the Shattering of America 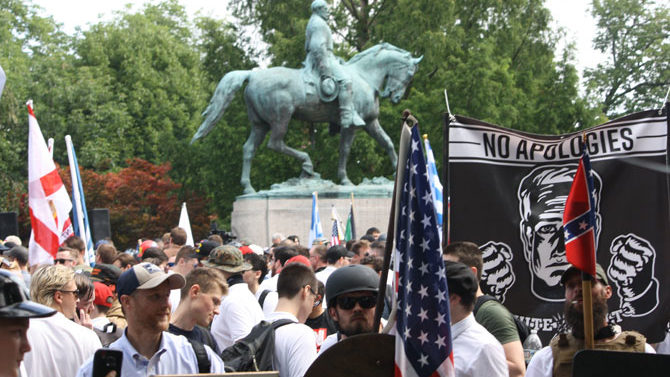 Two middle-aged men, one black and one white, were walking up a street in downtown Charlottesville, VA yelling at each other. It was a moment of relative normalcy in a day otherwise defined by mayhem.

The white man, Ed Knight, was wearing a Confederate flag bandana around his head. “You, with that stupid Confederate flag, talking about history,” the black man, George Steppe, said. “You don’t know nothing about no history. Only thing you know is hate.”

“This is our history, and it should not be destroyed,” Knight said of the statue of Robert E. Lee in the park, where an alt-right Unite the Right rally had been scheduled.

Knight supported the rally that brought hundreds of armed racists and fascists to his home city on Aug. 12. It also brought hundreds of anti-fascists, some of them armed with sticks and shields as well, pledging to defend the city from right-wing terror. Now, after hours of bloody battle during which they remained largely passive, riot police were breaking things up, pushing Steppe back, inching forward behind their shields. Knight walked alongside with a sign reading, “Make C-Ville Great Again.” 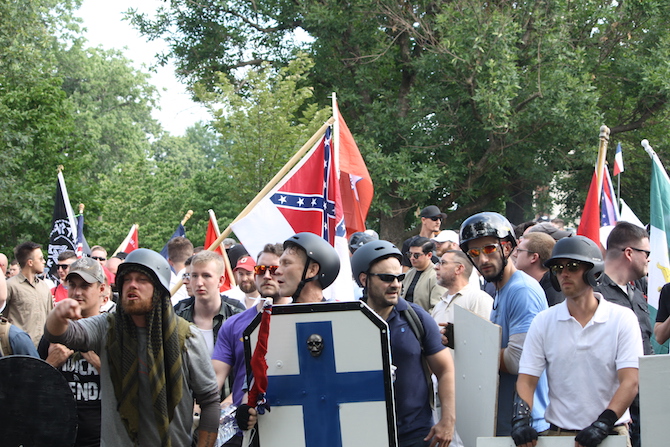 The chaos started the night before, as the Nazis and other racists gathered for the 21st Century version of a Klan rally—a Klanclave of khaki and tiki torches. At one point, a group of the white supremacists surrounded a group of counter-protesters, throwing punches and torches.

Within minutes of arriving in town on Saturday morning, we saw the first of many fights. White supremacists with helmets—some German World War II-era—white polos, sticks, an assortment of flags and homemade shields marked with the insignia of the racist group Vanguard America chanted at a smaller crowd of counter-protesters. “You can’t run, you can’t hide, you get helicopter rides,” they said, a reference to far-right governments in Argentina and Chile in the 1970s and ’80s that threw leftists from helicopters to “disappear” them.

The racists began to march forward, and the anti-racists tried to block them. After a swirl of violence and swinging sticks, three of the counter-protesters were left with bloody faces—the racists seemed to target women’s faces with their sticks—and the racists, who also took some heavy blows, ran away as the cops finally rolled in and began setting up a barricade.

The park was filled with every variety of racist you can imagine, from Nazi biker to fashy computer programmer. They were almost exclusively white and male. The anti-fascist activists who packed the streets were predominantly white, but among them were far more women and people of color. Otherwise the two opposing armies seemed to be of roughly equal size. The fights were swift, chaotic and brutal. 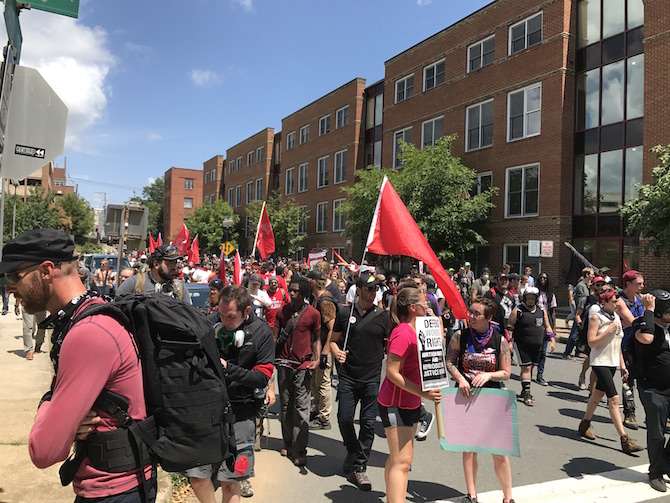 A crowd of anti-fascist counter-protesters, moments before a car plowed through them.

The two sides launched bottles and tear gas canisters back and forth as state troopers stood and watched, slack-jawed. At one point, as a few bottles whizzed by him in quick succession, a trooper perked up enough to pull out his phone and record some of the mayhem.

When the police declared the assembly illegal before it even began and told everyone to leave, it forced these groups together. Right-wing militia types wielding assault rifles and wearing MAGA patches on paramilitary uniforms roamed through the crowd. Guys with pistols seemed to keep their hands on them, ready to draw at any moment. It felt like something horrible would happen. Then, as the various groups became separated, it seemed like the rumble had largely ended. Steppe and Knight both seemed to think that it was the end of the day.

The racists, who had not been able to hold their rally, were trying to regroup at another park a little further from downtown. Eventually, as a state of emergency was declared, they decided to leave—some of them even suggested hiding in the woods.

Antifa burned right-wing flags in a park and then marched through the city; two groups converged on Water Street at around 1:35 p.m. It felt triumphant. They had driven the racists out of town—or at least those from out of town.

About five minutes later, as they marched through the streets, it sounded like a bomb exploded as a muscle car, which police say was driven by alt-right member James Alex Fields, sped down the street and plowed through the march and into other cars. Fields then threw the weaponized car into reverse, fleeing from the scene of terror.

Bodies were strewn through the road. Street medics, marked by red tape, delivered first aid while waiting on ambulances to arrive. Activists held Antifa banners to block camera views of the injured. 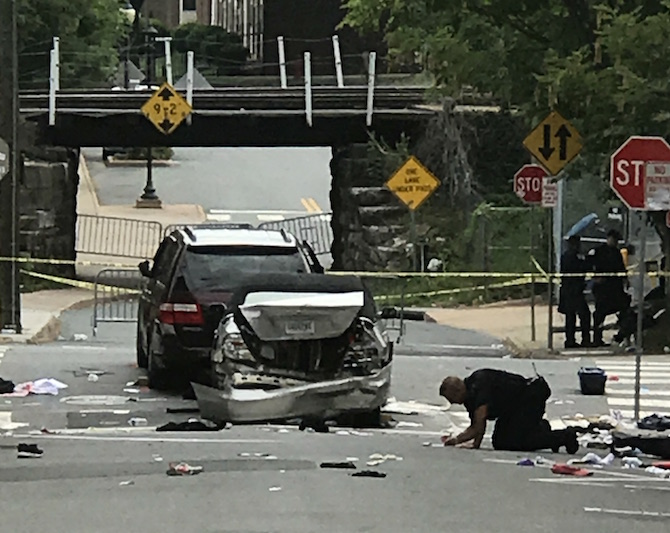 President Trump meandered through a speech in New Jersey in which which he condemned violence on “many sides.” He did not use the words “white supremacy” or “terrorism.” He did not say the name of Heather Heyer, the woman who was killed in the terror attack. He did not offer support to the 19 others who were hospitalized or prayers for those who were still in critical condition.

Fields, who was photographed earlier in the day with the same Vanguard America shield we saw when we first arrived in town, was arrested and charged with murder.

The argument Steppe and Knight were having in their hometown could have happened any time in the last 50 years. But the way the battle over white supremacy was being waged around them was new, and Charlottesville was not ready for it. None of us are.

When that gray car slammed into those people, it shattered a part of America, or at least the illusion of it. I don’t know what that means yet, because it shattered something in me, too.