No, Trump Isn’t Normal—and That’s Why He Was Elected 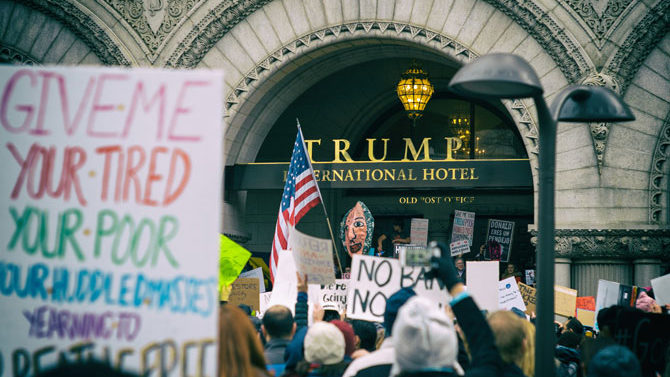 I went down to the White House to see Trump’s son-in-law Jared Kushner give his excuses surrounding the meeting that he, Trump’s son and Paul Manafort, among others, had with Russians, hoping to get dirt on Hillary.

“This is not normal,” I heard, echoing through my head as I walked from the Metro station and around the corner onto the freak show between Lafayette Square and the White House.

They actually didn’t let me into the White House, though, because I hadn’t updated my day pass. And Kushner ended up saying absolutely nothing that was not in the written statement that had been released earlier that morning. After all of the non-televised press briefings, Kushner’s little spiel in front of a tiny podium was solely for the television cameras.

Both of these things—forgetting to request a pass and not missing anything after all because the press events are total bullshit—are totally normal.

Since I got turned away from the traditional White House, I figured I would go futz around at its bizarre corporate shadow, Trump International Hotel. The Trump International Hotel really is not normal. In the Old Post Office building, it now looks like a castle. Big American flags wave above the word “Trump.” I passed The Spa, by Ivanka Trump™. Then I saw the sign for  “Presidential Ballroom.” Yes, it is creepy. It’s not a real presidential ballroom in the White House, but a ballroom in a hotel owned by the the president near the White House that is branded as a presidential ballroom. No, not normal.

The inside of Trump International is exactly what you would expect—an ostentatious display of gaudy luxury being soaked up both by the truly rich, perhaps hoping to please our plutocrat, and vacationing red-hats. Some of these people may be foreign leaders, so this kinda-gross hotel is also the site of the lawsuit filed against the administration by Maryland Attorney General Brian Frosh and D.C. Attorney General Karl Racine.

“The objective is to stop him from doing this, because we don’t know whether he’s putting his financial interests first or the American people’s interests first,” Frosh told Marc Steiner on the Democracy in Crisis podcast a couple weeks ago.

Hell, yeah, it is messed up if foreign governments use the hotel to give money to Trump and gain his favor. That’s the same reason I wasn’t going to spend a penny in that joint. But I was interested in seeing if they’d kick me out. I sat down on one of the overstuffed chairs. There were several newspapers laid out: the “failing New York Times,” and the “Amazon Washington Post,” which the President has spent a lot of time attacking.

I love the Times and the Post, but alt-weeklies like this were founded to provide something alternative to their sense of normalcy. We know what happens to even our best papers when the war machine starts moving. I mean, if Colin Powell says it, it must be true.

That’s where my air-conditioned mind started to drift as I sat in this hideous hotel. Why are we fetishizing normalcy?

Whenever Trump does something illegal, immoral or insane, we say it is “not normal,” to the point that it is almost the official Democratic slogan (and much better than their actual slogan, announced last week: “A Better Deal: Better Jobs, Better Wages, Better Future”).

I mean, sure, I get it that normal sounds pretty good in comparison with the Trumpian chaos that’s engulfed us all for the last six months. But if he falls tomorrow, the Democrats won’t have any better ideas than they had in November. They could float by for a while, but that is it. They will look like the idiot Republicans, who spent seven years railing about health care and can’t come up with a plan.

Trump was right when he said the system was broken. He is proof of that. He is a product of our normal—its culmination. It’s not normal that a psycho rich guy like Trump takes over the office to make profit for his family. But it is normal for rich guys to hold the office.

When Obama was first elected, the entire tea party was basically screaming, “This is not normal!” because we had never had a black president before. The Klan and the Red Shirts noted that Reconstruction was not normal. George Wallace cried out that integration was not normal, and the homophobic religious right still hollers about how abnormal gay marriage is.

By saying that the Trump regime is not normal, you give power to his followers who voted for him for exactly that reason. It validates them.

If Democrats and the mainstream opposition instead embraced some other terms, it might help them develop their own vision. “Not right.” “Not moral.” “Not smart.” “Not patriotic.” And, of course, “not legal.”

I did not get kicked out of Trump International, because, like the Democrats, I didn’t do anything—I just sat there checking email and taking notes. But when I walked back out into the D.C. summer, I felt acutely how vulnerable we are. The regime is belligerent, woefully uninformed and ill-prepared. The odds are great that someone will attack us. And when they do, the same people now calling for normalcy will likely fall in line behind the leader. That will be normal.