Theater of War: Propaganda, Art and Our Reality Show President 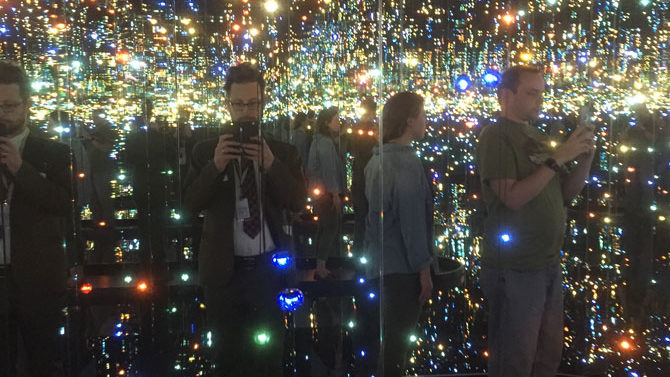 Not far from the White House, at the Hirshhorn Museum and Sculpture Garden in D.C., Yayoi Kusama’s blockbuster retrospective show “Infinity Mirrors” has been attracting insane crowds eager for the 20-second stretches of disorientation.

The rooms use facing mirrors, hanging lights and polka dots to create vistas of infinite regress. As art, it is perhaps underwhelming—an empty spectacle with no real depth, offering upon long inspection nothing unseen in a glance. I snapped a picture and realized it was far more compelling on my screen than in life, the perfect art for the age of the selfie.

On my phone, I saw myself in a Blade Runner-like world of “attack ships on fire off the shoulder of Orion” as the lights created towering psychedelic spires surrounded by replicants of myself. It was impossible to tell which one was real, because none of them were. They were all reflections on the screen.

I felt the same sense of vertigo a few days earlier at the Senate Intelligence Committee hearing into Russian active measures—or propaganda—intended to use the refracting mirrors of the internet to disrupt our election.

“What’s hard to distinguish sometimes is did the Russians put it out first, or did Trump say it and the Russians amplify it,” Clint Watts of the Foreign Policy Research Institute and George Washington University’s Center for Cyber and Homeland Security told reporters after his testimony on Trump’s embrace of propaganda conspiracies. “He actually repeats propaganda put out by RT or Russian sources and, vice versa, they parrot him.”

Reflections reflecting reflections again and again so that nothing is true.

This shouldn’t be surprising. Russia’s propaganda strategy was designed and perfected by Vladislav Surkov, who brought postmodern theory to the Kremlin, creating and managing Russian political reality like performance art. When he was sanctioned for his role in the invasion of eastern Ukraine, which he largely orchestrated, he said he didn’t mind. “The only things that interest me in the U.S. are Tupac Shakur, Allen Ginsberg and Jackson Pollock. I don’t need a visa to access their work. I lose nothing.”

In Peter Pomerantsev’s Nothing Is True and Everything Is Possible: The Surreal Heart of the New Russia, he writes that “Surkov’s genius has been… to marry authoritarianism and modern art, to use the language of rights and representation to validate tyranny, to recut and paste democratic capitalism until it means the reverse of its original purpose.”

Pomerantsev says Surkov turned Russian politics into a reality show. Then, as if in a new kind of arms race, we elect a real reality-show star as president.

I wrote that just before I heard that Trump bombed a Syrian airbase after pictures of gassed children in that country changed the president’s mind about intervention there. He explained the strike to the nation in a statement recorded at his country club.

Our country is making one of the most serious decisions possible, and yet, locked in our mirror rooms of constant conspiracy, we have no way to know what is actually happening. We don’t know whether Trump is trying to show that he is independent of the Kremlin, or whether this is another one of Putin’s ploys as he manipulates Trump. Trump himself has told us not to trust the intelligence community, and no one has any reason to trust Trump.

In “Without Sky,” a pseudonymous short story generally attributed to Surkov and set after the “fifth world war,” he describes the “the first non-linear war,” a war “of all against all.”

“A few provinces would join one side,” he writes. “A few others a different one. One town or generation or gender would join yet another. Then they could switch sides, sometimes mid-battle. Their aims were quite different. Most understood the war to be part of a process. Not necessarily its most important part.”

This sounds precisely like the situation we are getting into—Assad, ISIS, Russia, American-backed rebels, Iran and now Trump’s Tomahawks. All sides shifting. Whatever else the aims of this attack, the spectacle and confusion are good for Trump and Putin. And bad for the Syrian people who will continue to die. Those who escape will be denied entry into the U.S. as refugees.

“We see these beautiful pictures at night from the decks of these two U.S. Navy vessels in the eastern Mediterranean,” NBC’s noted fabulist Brian Williams said. “I am tempted to quote the great Leonard Cohen: ‘I am guided by the beauty of our weapons.’”

Surkov couldn’t have scripted it better.

It is so disorienting, but it all feels somehow familiar. Missile launches during the 1991 Gulf War were prompted in part by the PR firm Hill & Knowlton, which collaborated with one of the chairs of the Congressional Human Rights Caucus to present fabricated testimony to the caucus about atrocities committed by Iraqi soldiers in Kuwait. But we were all mesmerized by the night-vision green missiles flying through doors in an aesthetic later adopted by the Paris Hilton sex tape.

In 2003, we went back to Iraq on the basis of another massive PR campaign.

Do we want to take out Assad? At this moment, nobody knows. But people are lining up behind Trump. He will realize war, the ultimate image enhancer, is good for him.

It’s like we’re all trapped in one of Kusama’s infinity rooms, waiting for the missile to burst through the door. But we don’t know where the door is. We have lost all orientation.