Was Standing Rock the Birth of a New Environmental Movement? 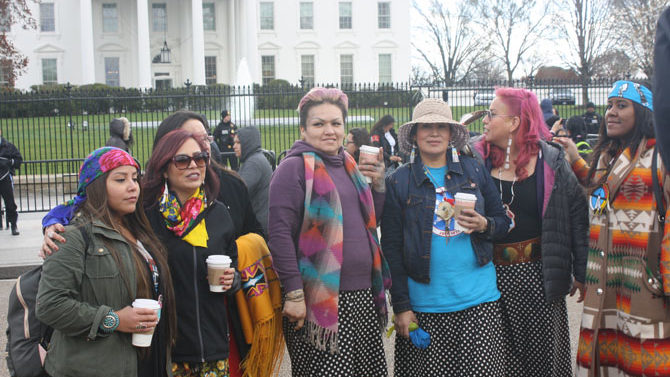 It is snowing in Washington, DC—strangely, in early March after an insanely warm winter—but nothing compared to the cold many of the activists and tribal members gathered here endured in North Dakota while fighting against the construction of the Dakota Access Pipeline.

Kristen Tuske, a 39-year-old Sioux woman from the Standing Rock Sioux Reservation, stands with several other women in front of the White House, her back to it, fist raised in the air. She has pink hair, sculpted arches for eyebrows and tattoos on the side of her face. She lived at the camp where thousands of “water protectors” gathered to fight the pipeline for seven months.

“The last couple weeks at the camp were sad, and everyone was a little angry,” she said. “A lot of feelings are hurt… That was our home, and we got kicked out.” The last protesters left the camp on Feb. 23.

The struggle started last summer, when two tribes sued the Army Corps of Engineers to stop the construction of the pipeline, claiming it could contaminate their water supply and destroy significant archeological sites. That kicked off months of protests, often pitting camps of indigenous people—and the environmentalists and veterans who had come to fight with them—against an increasingly militarized police presence. President Obama twice ordered construction stopped, but after taking office, Trump gave the go-ahead to the pipeline, insisting publicly that it must be constructed of American steel (a stance he quietly reversed this month).

The evacuation of the camp may be a defeat for Standing Rock, but in the eyes of those gathered in front of the White House, it may also signal the beginning of something greater: the possibility of a real environmental movement in America.

“The reason I am here is to represent our future generations and be their voice, part of the resistance in decolonizing our minds,” said JoRee LaFrance, a member of the Crow tribe from Montana. “Protecting our waters should be our No. 1 priority, and that’s why we’re all here, is to unite and protect tribal sovereignty and to protect indigenous people and their waters. People need to realize indigenous people are doing this for all people, not just indigenous people. We’re here to protect the water for all people.”

As I talk to people at the rally, I hear that sentiment again and again. It is not just about the water at Standing Rock. It is a symbolic battle, a turning point. The indigenous people are stepping forward to save the planet—and to save us from ourselves.

Little Thunder, an elder from South Dakota’s Rosebud Indian Reservation, is standing apart from the crowd in full ceremonial regalia: a feathered headdress, a circular feather shield and some mirrored sunglasses. He came all the way to Washington to “let people know and let Trump know that this is not just a Standing Rock or a Washington, DC or a [political] issue. This is for the whole earth. We’re trying to save the water because water is life.”David Kenny, a member of the Seneca Nation, turns his attention toward the White House and the white man inside it. “Can you stop this pipeline, please?” he asks, his voice soft. “It’s not about business anymore. It’s not just us that’s going to fall—it’s you, too. Everybody is going to die if this continues. The earth is dying.”

There is no indication that Trump or anyone else in the White House hears this, despite the fact that native nations have spent the last four days with teepees set up on the mall, raising awareness of indigenous and environmental issues. On Mar. 9, the day before the gathering across from the White House, Environmental Protection Agency Administrator Scott Pruitt said he would not agree that climate change caused by human activity is “a primary contributor to the global warming that we see.”

On the very same day as the rally, the National Oceanic and Atmospheric Administration released a study reporting that carbon dioxide levels rose at a “record pace for second straight year.”

“The two-year, 6-ppm surge in the greenhouse gas between 2015 and 2017 is unprecedented in the observatory’s 59-year record,” the report read.

Trump’s budget proposal, released a week after the rally, slashed the EPA by more than 30 percent. NOAA is not included in the final proposal, but a leaked draft showed a 17 percent decrease in funding.

The snow falls on the demonstrators and the dancers and the speakers on the stage. Taboo from the Black Eyed Peas takes the stage. He is part Shoshone, and organized the release of a song recorded by a collection of mostly native artists to bring attention to Native American issues.

It is still a strange moment, watching the snow fall as this pop star in a floppy hat sings over a recording of his band’s song “I Gotta Feeling” and people sway and dance and sing along, making it feel, for a moment, more like spring break than a deadly serious fight for the fate of the world. Looking over at the White House, I have a feeling that tonight’s probably not gonna be a good night. But if we listen to the water protectors, we may still have some good nights left.