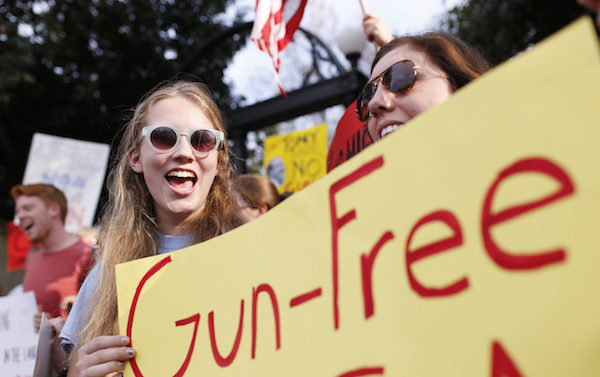 It’s that time of year again: Pollen is filling our noses, spring is in the air, and the Georgia legislature is trying to pass another campus carry bill.

A group of over 200 students and other protesters gathered in front of the UGA Arch Tuesday afternoon, chanting, “Hey hey, ho ho, campus carry has got to go,” and holding signs.

Speakers included professors, students and survivors of the Virginia Tech massacre in 2007.

“The majority of UGA feels that this bill will make our campus less safe,” said student Mallory Harris, who organized the protest.

“This is just common sense and a common sense issue,” professor Freda Scott Giles said. “It doesn’t make sense to have a whole bunch of people who are just people like you and me walking around our campus carrying guns, so if weapons are allowed eventually they will be used—I don’t want to think about the bad things that could happen.”

Giles added her concerns about the effects firearms could have on stifling academic debate in the classroom. “What kind of education will going to get if your faculty is living in an atmosphere of fear?” Giles said.

Protest organizers are encouraging the public to text “veto” to 644-33 and ask Gov. Nathan Deal to veto the campus carry bill as he did last year, assuming it passes the state Senate. (It has already passed in the House.) Athens for Everyone was circulating a petition they will hand-deliver to the governor’s office tomorrow.