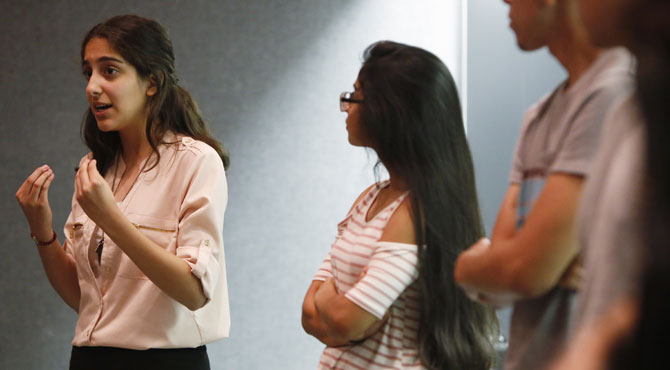 With anti-immigrant sentiment rising in the U.S., six Clarke Central High School students took it upon themselves to organize a panel discussion at UGA Apr. 13 to talk about their experiences as immigrants.

Clarke Central English teacher Ian Altman opened the forum by highlighting the Trump Administration efforts to redefine what it is to be American as something other than the melting pot that has made this country great.

The students then spoke about the various challenges they face as immigrant Americans under the Trump Administration. The students came to the U.S. from across the world—Iran, Brazil and Mexico. They faced language barriers, xenophobia and being bullied for being different. In recent months, as tensions have risen, they’ve also faced the fear of losing loved ones as Immigration and Customs Enforcement steps up deportation and splits up families. Junior Lisbeth Castro has had to sit down with her parents for dinner to discuss what to do if they’re taken away.

Speaking up as the students did last Thursday is something Shahrzad Roshan, who was born in Iran, could be arrested for in her home country. Here, she faces prejudice and suspicion. “I just assumed they didn’t know because they had never been [to Iran], and not knowing is OK, so I just didn’t pay attention,” she said. “But at one point the perceptions of us being violent got out of hand. People would relate everything about Muslims to a bomb or to explosions.”

Roshan said she sees it as her responsibility to clarify false perceptions of foreigners. “Islam is a beautiful religion and is not defined by extremists,” she said. “Next time you hear about a terrorist attack, you will probably think about the Islamic State and the Muslims in the Middle East, but I want you to take a moment and ask you to think about just who the victims are, because 97 percent of the time the victims are Muslims, too.”