Press-Hater Bannon Is the Star of CPAC 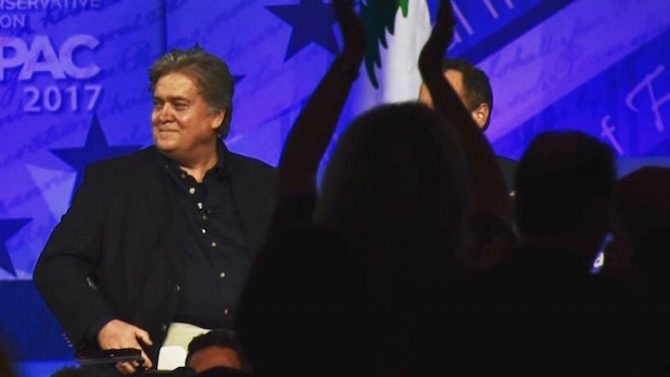 Steve Bannon, the schlubby alt-right White House advisor who wants to destroy the state, was the clear star of the first day of the conservative circle jerk that is CPAC.

Bannon shared the stage with White House Chief of Staff Reince Priebus, but nobody really cared what Priebus said. Partly because Priebus talks a lot more than Bannon, who has not appeared publicly since Trump won the election. But it was also because Priebus sounded pretty much like everyone else, while Bannon talked like a stoned college senior who somehow accidentally found himself secretly ruling the most powerful country in the world.

The first thing that became clear on the inaugural day of the conference where Trump first laid out his own political agenda half a decade ago was that Kellyanne Conway, who co-ran the campaign, in its later stages, with Bannon, is on the outs. She spoke at 9:10 am, when almost no one was there yet. She was the opening act of the opening act, followed by Larry Arm, the head of Hillsdale College. Never heard of him? Exactly. I mean, he was talking about Socrates and quoting Latin and shit.

That’s how bad it looks for Conway right now. But, even if it required talking largely in generalities, she did avoid telling big major falsehoods or inventing terrorist attacks. The 50-year-old did seem to confuse herself for a millennial for a moment when asked about feminism. “This generation particularly don’t particularly like labels,” she said of the youngsters, adding “we’re not necessarily joiners or like to label ourselves.”

In giving a bit of advice, she may have directed a bit of it at the prez, saying: “Don’t live online. Live in real time… Make sure people see something other than the top of your head.”

Shortly after Conway wrapped up, Dan Schneider of the American Conservative Union, which was hosting the event, gave a talk on how the “alt right ain’t right at all.”

He referred to the alt right as a “sinister organization trying to worm its way into our ranks” and as “garden variety left-wing fascists.”

Yep. You got that right. The far far right racists like Richard Spencer, who was mobbed by press and eventually kicked out of the conference, are leftist.

But when Bannon and Priebus took the stage, the repeated use of the words “nationalism” and “deconstruction”—and Bannon’s repeated attacks on the press as the “opposition party”—made it hard not to think about fascism.

He said he wanted the “deconstruction of the administrative state.”

“If you look at these Cabinet nominees, they were selected for a reason, and that is deconstruction,” Bannon said.

“You know, I’ve said that there’s a new political order that’s being formed out of this. And it’s still being formed,” Bannon said. “But I think we—the center core of what we believe, [is] that we’re a nation with an economy, not an economy just in some global marketplace with open borders, but we are a nation with a culture and a—and a reason for being. And I think that is what unites us and I think that is what is going to unite this movement going forward.”

This is scary. Remember, these are supposedly small government guys talking about creating a new political order around a national culture.

The “corporatist globalist media” is opposed to Trump’s “economic nationalism,” he said, adding that things would get worse because the “opposition party” would fight back.

“If you think they [press] are going to give you your country back without a fight you are sadly mistaken,” Bannon said.

Displayed behind his head was the logo for the Breitbart News Network—one of CPAC’s sponsors.

The National Is Catering an Oscar-Themed Fundraiser for Ciné