The Democratic Party Is Dead; Here’s How to Revive It 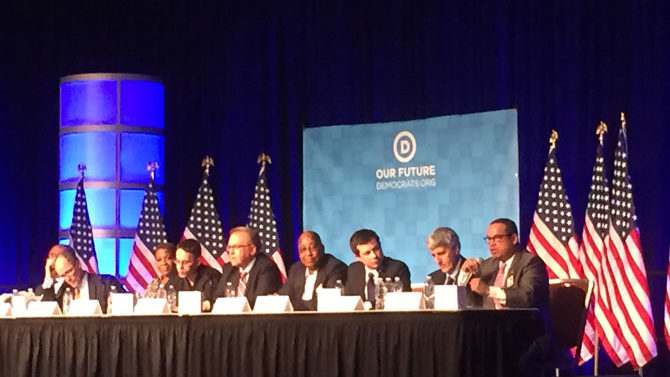 As Democrats choose the new chair of the Democratic National Committee this weekend, the worst thing they could do is claim credit for the resignation of retired Lt. Gen. Michael Flynn as national security advisor and the withdrawal of Hardee’s honcho Andy Puzder as secretary of labor nominee. It will make them underestimate their own weakness, which was painfully apparent at a recent party forum in Baltimore.

The forum—the last before 447 party faithful vote for a new chair in Atlanta on Feb. 26— was held in the same Baltimore Convention Center as a car show, and it had the same atmosphere. Each candidate for party office had a table in the hallway where volunteers presented their candidate as the shiny new-model Democrat.

And like car buffs refusing to acknowledge their dependence on a nonrenewable resource and the corresponding need to maintain a murderous petro-empire, most everyone at this DNC Future Forum refused to recognize that they were dead. They fluttered around with futile hope, as if everything were ultimately the same.

The scene was Woodstock for necrophiliacs. Everyone had taken the brown acid.

“What we have seen in these few short weeks is carnage and chaos,” said establishment frontrunner and former Secretary of Labor Tom Perez. “We see it every single day, the assault on our democracy.”

The answer, it seemed, for all of them was: Rebuild the party. But what will that look like? Democrats have no hope in 2018, when they will defend 25 Senate seats, only 12 of which seem safe; eight Republicans are up for re-election—and only two of those seats are truly vulnerable. And while they may win a few House seats, there is no possibility of regaining control.

We all need to recognize that America is a single-party state. Whoever takes hold of the Democratic Party on Feb. 26 must find nonelectoral ways to use the party to help save our democratic institutions. Otherwise, the party will cease to function, even as a ghost.

Most of those vying for leadership positions spoke about “resisting Trump” and drawing energy from anti-Trump protests around the country.

Minnesota Rep. Keith Ellison, the favorite of the Sanders faction and the first Muslim elected to Congress, spoke with both passion and charisma—noticeably lacking in many other candidates, who seemed to have trained at the John Kerry school of long-winded and indirect answers. Ellison recognized a “climate of dis-ease among Democrats” and understood the need to “engage all citizens-turned-activists moving in on this new movement.”

Though he was vastly superior to Perez, the engagement Ellison spoke of easily slips into vampiric attempts to suck the energy from a movement that has grown in spite of him and his party.

When hundreds of protesters showed up at airports a few weeks earlier, the grandstanding, pharma-shilling New Jersey Sen. Cory Booker and five House representatives from Maryland and Virginia went to Dulles International Airport and demanded to see people being detained by Customs and Border Protection agents. But they left long before the lawyers who did the real fighting.

The people running for DNC chair have been slow to catch on, too. On the day of the Women’s March, as millions of Americans moved forward without them, the candidates attended yet another fundraising forum on the future of the party. Only Pete Buttigieg, mayor of South Bend, IN, had the sense to skip the intra-party event and march with the people of his city. (Ellison and Perez only stuck around part of the time.)

Listening to the candidates, I kept thinking: The question is not what can the country do for Democrats, but what can Democrats do for the country.

What if the Democrats stopped worrying so much about rebuilding their party and started to think about defending American institutions? Instead of debating in a convention center, they could physically put themselves between those enforcing Trump’s policies and those most affected by them. They could be out on the streets in Latinx neighborhoods, ready to provide legal aid, witnesses and, if necessary, people to be arrested.

When Flynn resigned amid allegations that he had discussed sanctions with the Russian ambassador while Obama was still president, filmmaker Michael Moore tweeted: “We demand that the weak & spineless Democrats bring Congress 2 a halt until investigative hearings are held & impeachment charges are filed.”

And he is right. Democrats’ fatal mistake is acting like they will maintain our respect by playing it cool. You lost to Donald Trump. You can’t play it cool.

All of the Democrats who boycotted the inauguration after Trump insulted Rep. John Lewis did so, in part, because of the courage Lewis showed on the Edmund Pettus Bridge half a century ago.

President Johnson may have stepped in to propose legislation after cops smashed Lewis’ head on Bloody Sunday, but Lewis did not wait for Johnson. What if all the candidates for DNC chair went to stand with the the water protectors at Standing Rock?

Precisely because the Democrats lack political power, they have the potential to become a great moral force if they are willing to be beaten and tear-gassed and arrested. Instead, they are all blinded by the possibility of regaining power, like underworld shades still pining for their previous lives.