Trump Paves the Way for an Expanded Police State 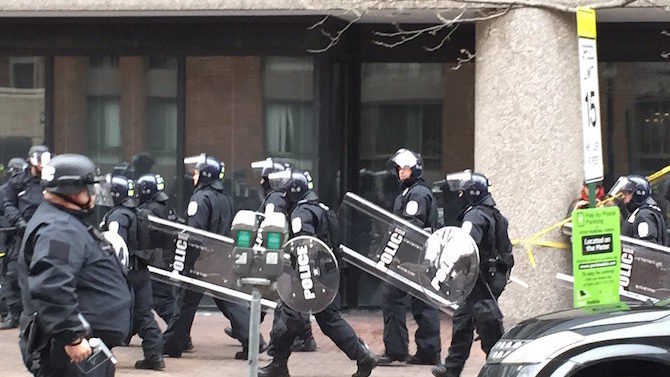 President Trump met with law enforcement leaders twice this week, saw Jeff Sessions confirmed as America’s top cop, and signed three tough-on-crime executive orders, which were then condemned by an organization composed of some of the nation’s top law enforcement officers.

Trump met with law enforcement brass from major cities on Wednesday and said there would be a “zero tolerance policy for acts of violence against law enforcement,” adding that we need “national action” to deal with crime in Chicago and declaring that since drugs are “afflicting our nation like never, ever before,” and vowing to be “ruthless” in the fight against them. “We’re going to stop these drugs from poisoning our people,” he said.

At the swearing-in of Jeff Sessions, he signed three “tough on crime” executive orders declaring a “new era of justice.”

“The murder rate in our country is the highest it’s been in 47 years, right?” Trump told a group of county sheriffs he met with on Tuesday, the day before the police chiefs. “Did you know that? Forty-seven years. I used to use that, I’d say that in a speech and everybody was surprised, because the press doesn’t tell it like it is. It wasn’t to their advantage to say that. But the murder rate is the highest it’s been in, I guess, from 45 to 47 years.”

In reality, the murder rate is historically low, despite a sharp spike in cities like Baltimore and Chicago over the last two years.

This confab with top cops was taking place at the same time that anti-drug crusader and racist pettifogger Jeff Sessions was being confirmed as the chief law enforcement officer in the country.

Law enforcement has already taken on much of the language and tactics of the War on Terror, which in some ways borrowed from the War on Drugs. But Trump further confuses them, complaining to the police chiefs, for instance, about the judicial branch questioning his Muslim Ban. “They’re taking away our weapons one-by-one,” Trump said, as if the unfettered power of the president is synonymous with effective law enforcement.

“This is a weapon that you need, and they’re trying to take it away from you.”

Talking to the chiefs, Trump declared that the country supports law enforcement, while the “dishonest media” tries to “convince you it’s different,” presumably referring to coverage of widespread protests over the past few years in the wake of police killings of unarmed African Americans.

The country may support law enforcement, but law enforcement might not necessarily support Trump. In what should be seen as a stinging rebuke on Friday a report written by Law Enforcement Leaders to Reduce Crime and Incarceration, a group made up of nearly 200 current and former police chiefs, sheriffs, federal and state prosecutors, and attorneys general from all 50 states” rejected Trump’s tough-on-crime approach.

“In early February, the President signed an executive order creating this ‘Task Force on
Crime Reduction and Public Safety’ at the Justice Department, and signed another order
to curb gang and drug activity. The proposal and these orders, however, do not target
their language and efforts on fighting violent crime—the most serious threat to our
public safety. Instead, they encourage law enforcement to focus on crime more generally.
Federal resources are imperative to combat crime across the country, but failing to direct
these resources toward our most immediate and dangerous threats risks wasting taxpayer
Dollars,” the report, called Fighting Crime and Strengthening Criminal Justice: An Agenda for the New Administration, reads.

“We need not use arrest, conviction, and prison as the default response for every broken
law. For many nonviolent and first-time offenders, prison is not only unnecessary from a
public safety standpoint, it also endangers our communities,” it continues.

The paper was co-authored by David Brown, who was the widely-praised police chief in Dallas when five law enforcement officers were shot at a protest there last summer but does not claim to speak for every member of the association.

We’ll have to wait and see how the regime responds to these recommendations. But it is likely they will push against a more measured approach to policing because a comprehensive war on crime is a great way to scare and control the populace and eliminate political enemies, as Nixon aide John Ehrlichman, an aide to Nixon, made clear in a conversation with Harper’s last year.

“The Nixon campaign in 1968, and the Nixon White House after that, had two enemies: the antiwar left and black people,” Ehrlichman said. “We knew we couldn’t make it illegal to be either against the war or black, but by getting the public to associate the hippies with marijuana and blacks with heroin, and then criminalizing both heavily, we could disrupt those communities. We could arrest their leaders, raid their homes, break up their meetings, and vilify them night after night on the evening news. Did we know we were lying about the drugs? Of course we did.”

If anything, Trump is more paranoid and vindictive than Nixon. And it will be hard for police departments to refuse federal money. Because tons of cops are empowered by the election of Trump. And as one of the few professions where the union is often as powerful as the boss, chiefs who don’t support Trump’s policies may fall.