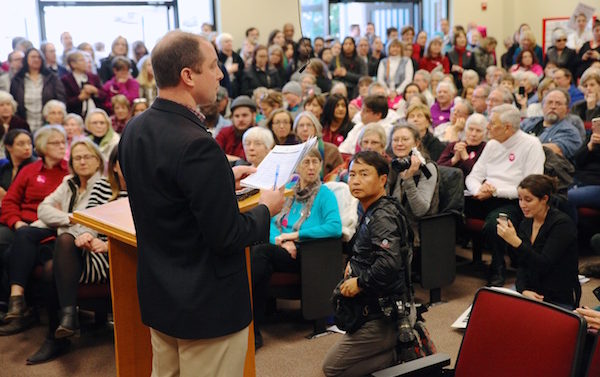 Athens for Everyone pushed back today against a spokeswoman for Georgia Sen. David Perdue who called a rally in Greensboro Friday “manufactured.”

A4E, along with Indivisible Georgia District 10 and other local groups, organized a trip to Greensboro to speak to staffers for Perdue, Sen. Johnny Isakson and Rep. Jody Hice about their concerns about the Trump Administration. The rally drew about 500 people, including several hundred from Athens.

Perdue’s spokeswoman dismissed those concerns in a statement to the Atlanta Journal-Constitution on Saturday:

Perdue’s spokeswoman Caroline Vanvick said the senator set up the meetings to help Georgians who had “casework concerns” with federal agencies, such as senior citizens and veterans.

“If organized groups want to manufacture protests and continue to be disruptive,” she said, “it will only deny those who really need help.”

Even the phrasing of Friday’s event was a source of controversy.

The lawmakers’ deputies told protesters Friday the event was never intended to be a “town hall” and that they wouldn’t answer questions, leading to a cascade of boos. And a Hice staffer told the Atlanta Journal-Constitution on Thursday it was planned as a “constituent services day” with private one-on-one sessions with residents to hash out passport problems and other issues.

But several organizers on Friday and Saturday circulated a press release from Isakson’s office earlier this month describing it as a chance for constituents to talk to his aides about “any issues concerning the federal government, federal legislation or federal agencies.”

A4E released a statement this morning saying that, if anyone manufactured the protest, it was Perdue, Isakson, Hice and Trump and their “dangerous, hateful agenda.”

It should be noted that Hice has not held a true town hall meeting in Athens since he was elected in 2014, and neither Perdue nor Isakson has visited Athens since the election.

Trump Paves the Way for an Expanded Police State