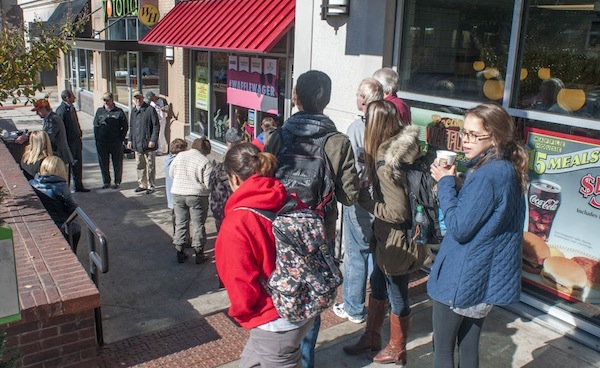 Who says there’s no such thing as a free lunch? And dinner… and breakfast…

Free waffles and hash browns are being handed out at the downtown Waffle House today courtesy of Georgia beating Auburn on Saturday, thanks to the “waffle wager.”

A bet among Waffle House’s suppliers Basic American Foods, C.H. Guenther & Sons, Inc. and Royal Cup Coffee was made based on the outcome of this rivalry game. The deal was the supplier who chose the losing team would have to pay for a full day of free food at the winning team’s hometown Waffle House. Royal Cup Coffee bet against us, so now they’re footing the bill.

In addition to the free waffles, all four companies came together to donate $15,000 to the University of Georgia’s general scholarship fund.

Journalism: A tough job, but someone’s got to do it.

Here was my quest for free food:

I arrived at the downtown Waffle House to a fairly short line outside if you consider that free waffles and hashbrowns were being given away. Within minutes, I’m offered a choice of free coffee or hot chocolate while I stand in line.

I’ve made it inside. The line has transformed into a sitting musical chairs rotation as people wait for others to leave their tables inside the restaurant. A waitress comes around and takes my order, then hands me my ticket. Some students who stopped by in between classes try and get a to-go order, throwing somewhat of a wrench into this well-oiled machine.

I sit down at the counter, next to some students. One exclaims, “This is the best day of my life.” I concur. This food offers a welcome break away from the average college kid’s Ramen Noodles diet.

My hash browns with onions, tomatoes and cheese arrived. I take a bite and noticed the kitchen is crammed with roughly 20 workers trying to maneuver around each other. My server tells me that half of the workers don’t normally work there. Reinforcements had to be called in for this day.

My pecan waffle arrived. And I dug in.

I finished. Didn’t realize how hungry I was. On my way out the door, I jested about there “not being such a thing as a free lunch,” and I was told by several of the company’s executives to come on back for dinner and breakfast tomorrow (as long as I make it there before 7 a.m. tomorrow, when it ends).