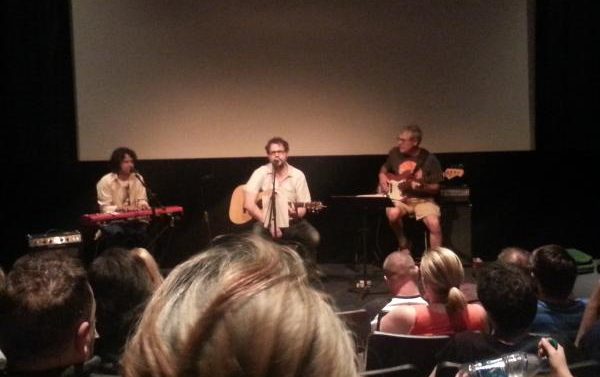 AthFest ain’t just about the music, folks. I scored tickets to a screening of the documentary Muscle Shoals earlier in the week. Although I had already had a ton of fun during the weekend, I’d be lying if I said that I wasn’t looking forward to this seeing film more than checking out the bands I had seen thus far.

The screening wound up being a “who’s who” event that brought in some of the big names from around town. Dave Marr (formerly of the Star Room Boys and Flagpole and a member of Ciné’s board of directors) introduced the film and made a strong case for keeping the public aware of the need to adapt the independent theater for the digital age. Scott Baxendale of Baxendale Guitars was also in attendance. The bulk of the crowd seemed to be made up of music nerds and those committed to keeping Ciné solvent and viable.

Muscle Shoals really works as a love letter to an underappreciated town in American music history. Sure, the film spotlights famous musicians like Keith Richards, Mick Jagger, Bono, Steve Winwood, Percy Sledge, Wilson Pickett, Greg Allman and others, but the story that gets told about FAME Studio’s Rick Hall’s torturous life and his split with the Swampers is the real focus.

Patterson Hood’s father, David (who played bass on some of the biggest hits coming out of the area), plays a big part in the film, which chronicles the heyday of the Muscle Shoals recording studios. I won’t give away any of the surprises, but suffice it to say that the film is funny and sad and has all those things in a movie that everyone likes.

I know, I know—I’m not a film critic, but if you’re in the hunt for a rock doc, you need to see this film.

After the screening, David and Patterson Hood took the stage and answered a few questions before playing a few covers with Drive-By Truckers’ keyboard player and longtime Athenian Jay Gonzalez. The trio played stripped down versions of The Staple Sisters’ “Respect Yourself” and “Starting All Over Again” by Mel & Tim. The songs may not have been all that flashy, but they were still a nice cap for the event.

Sunday in Photos: Patterson Hood, St. Paul and the Broken Bones and More