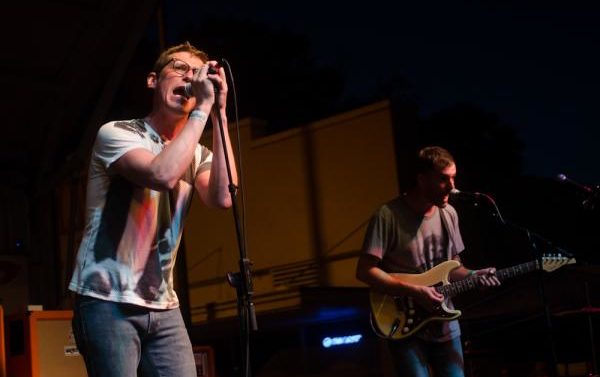 If you were downtown anytime after noon today, you could feel the hustle and bustle west of College Avenue. Early in the day, a swath of vendors were lugging their merch around to be sold later in the night while the stage crews whipped up the final touches on the Pulaski Street Stage. Not a whole to see for the average AthFest goer, but plenty to look at for the Athens music uber-nerds.

After a few warm-up acts that included The District Attorneys and Quiet Hounds, the Modern Skirts said goodbye to their fans with their final show as a unit and the last outdoor show of the evening for AthFest. At the sun began to set behind the band (an apt visual metaphor if there ever were one) the band rolled through their set of bouncy power-pop that had lead singer Philip Brantley moving and goofing all over the stage. After a few songs into their set, guitarist and vocalist Jay Gulley thanked the crowd, telling them that it was “a staggering honor” for the band to be playing their last show on the main stage at AthFest.

While some final shows may not be the best representations of a band’s work, every member of the Skirts looked to be in great spirits, and it’s safe to say that it was one of the best shows the band has played in town in years. The crowd was certainly responsive, too. The mass of people (which by my estimate stretched at least past the beer garden tent near Trappeze) gave the Skirts an appropriate send-off with lots of love.

Here is the Complete AthFest Schedule