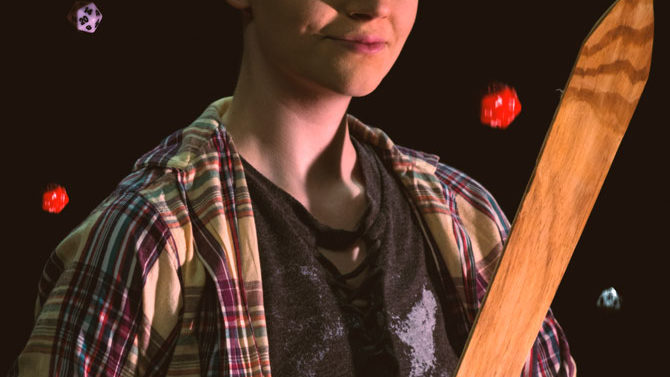 She Kills Monsters: Perhaps thanks to “Stranger Things,” this adventurously funny and poignant play steeped in Dungeons & Dragons lore has been getting produced all over the place. This tale of friendship, loss, teen angst, fantasy and family is as nerdy as it gets, in the best possible way. High-school teacher Agnes (Savanah Hudson) is trying to make connections to the life of her sister Tilly (Rachel Hoover), who has recently died. She plays through Tilly’s D&D campaign with the help of Tilly’s friends, where they battle monsters in the game and in themselves.

The “deceptively breezy and rather ingenious comedy” debuted Off-Off Broadway in 2011, when Eric Grode of The New York Times praised not just the design and effects, but also its portrayal of the “more conventional wounds of adolescence, the ones that come from loving and not being loved in return. The whole enterprise is kind of dopey and kind of invigorating and kind of remarkable. It will slash and shapeshift its way into your heart.” Director T. Anthony Marotta is pulling out all the stops with this show, produced with all the usual magic of costumes and scenery along with video projection, 3D printed props and puppetry to complement a top-notch cast of UGA student actors. It’s a don’t-miss experience regardless of one’s geek credentials.

The 39 Steps: It’s a theatrical send-up of a Hitchcock film based on a classic spy thriller that playfully features a dashing but also silly Richard Hannay (Matt Suwalski). Hannay decides to go to the theater for mindless entertainment to escape the tedious news of wars and politics, but ends up getting drawn into increasingly ridiculous intrigues when a mystery woman (Julia Roessing) invites him up to her place but turns out to be a spy.

Ben Brantley of The New York Times called it an “absurdly enjoyable, gleefully theatrical riff” on the Hitchcock film, praising it as “throwaway theater at its finest” and “committedly silly.” Director Isaac Callahan is increasing the deliberate theatricality by doubling the number of “clowns” (who play a bewildering number of roles) from two in the script to four. Callahan’s idea is that Hannay and the mystery woman make up a two-person show that quickly needs more than two actors, “dragging the hapless crew into the action.” If, like Hannay, you’re looking for a night of escape from the news by going to the theatre, this one should deliver the entertainment.

Steel Magnolias: The film is such a well-known modern Southern classic that the play hardly needs a description. Unlike the 1989 film, however, all of the scenes in the play take place inside Truvie’s beauty salon, where there’s a wedding to style for, a loving mother and adult daughter at odds, wisecracks between old friends, a quirky and shy new girl at the salon and “laughter through tears.”

“Not since Oklahoma! has down-home pluck been so rhapsodized on Broadway,” according to Ada Calhoun of New York magazine, writing about the 2005 Broadway revival. “You can practically see the deep-fried halos appearing over the six exemplars of Southern womanhood… as they wash each other’s hair, gossip viciously, and have meaningful conversations about life.” Fans of the quippy, tear-jerking film should not pass on the chance to see it done onstage at least once.

Steel Magnolias, by Robert Harling, is presented as a dinner theater production by Brightstone Productions at Brightstone Theatre on Oct. 4–5 at 6 p.m. and as a dessert matinee on Oct. 5–6 at 2 p.m. Tickets are $35 for the dinner show (food by Texas Roadhouse), $25 for dessert matinees and available at 706-705-2599 or brightstoneathens.com.

The Piano Lesson: The Etheridge Arts Ensemble of Marietta, which supports diversity in performing arts and higher education, brings the Pulitzer Prize-winning play by August Wilson to the Morton Theatre as a benefit for the Athens Area Paine College Club’s annual scholarship drive and United Negro College Fund campaign.

Called “a transcendental kitchen-sink drama” by Sylvie Drake of the Los Angeles Times, The Piano Lesson centers around a brother-sister conflict over a treasured family heirloom. The piano had belonged to a slave owner, who had traded their great-grandmother and her son for it. Its intricate carvings had been made by their great-grandfather, who remained. Later, his grandsons had stolen the piano, and now the slave owner has finally died. Willie Boy wants to sell the precious antique to buy the slave owner’s former land, Berniece does not want to part with the ancestral treasure, and this new conflict piled on to older problems between the two threatens to blow up the entire family.

Fruit Salad: Chase Brantley and Nicholas Hemerling team up for a night of sketch comedy, calling it “a ‘comedy cabaret,’ simply because there is not a word to accurately describe the show. It’s a combination of Gallagher, Andy Kaufman, disco and clown. It features two long-haired men dressed in tights and capes… who take the audience on a surreal night of playful, idiotic and childlike physical comedy.”

The show, recently performed at the 40 Watt, features “dancing, chainsaws, watermelons, pineapples, nuns, Spanish guitars, superheroes and much more,” and is, by the way, not appropriate for kids. The show is presented by and at Moonlight Theatre Company on Oct. 4–5 at 7:30 p.m. Tickets are $14, $8 for students and available at moonlighttheatercompany.com.

The Magic Negro and Diversity NOW!: The Magic Negro, produced at the Alliance Theatre in 2017, is Mark Kendall’s one-man sketch comedy show “about the super accurate, multi-dimensional, totally realistic and definitely never erroneous, distorted or one-sided ways black males are portrayed in the media.” It received high praise from Wendell Brock of the Atlanta Journal-Constitution, who called it “a smart, funny and troubling look at race in America today” that is “guaranteed to make you laugh, even though you may later feel ashamed of yourself for doing so.” Brock continued, “When you leave the theater, you may be tempted to text all your friends: “Man, You’ve gotta see this! It’s so damn good.’ It is. And you should. Just keep in mind that laughing is the easy part. Confronting the ugliness beneath the comedy is way harder.”

Diversity NOW! is Kendall’s newest work, centered on a large corporation under fire for its CEO’s racist scandal. The company scrambles to hold a mandatory diversity/inclusion seminar, hosted by its lone black employee. However, it quickly becomes clear that seminar probably won’t go according to plan. Brock has called Kendall “a brilliant writer and performer,” and there are only a small number of seats in this intimate venue, so get your tickets early if you don’t want to miss your chance at this experience.

The Magic Negro and Other Blackness, written and performed by Mark Kendall, is presented by and at Moonlight Theater Company Oct. 10 at 8 p.m. and Oct. 11 at 7:30 p.m. Diversity Now! is presented Oct. 12–13 at 7:30 p.m. Tickets are $14, $8 for students and available at moonlighttheatercompany.com.

Curse of the Lost Mummy: An ambitious Egyptologist has lost the mummy of Pharaoh Khamenshetsu. He chooses to go ahead with the museum exhibit even if he has to fake it, ignoring the rumors of a mummy’s curse at first—until the mysterious accidents and bizarre appearances of Khamenshetsu threaten to derail it all.

The kids of Athens Little Playhouse are bringing the fun to their original whodunit by director and playwright Lynne Thomas Oct. 11–12 and 18–19 at 7 p.m. with 3 p.m. matinees on Oct. 13 and Oct. 20. Tickets are $10, $5 for children 12 and under and available at athenslittleplayhouse.org/tickets.

Pending: Playwright and UGA professor John Patrick Bray’s First Year Odyssey seminar “Fringe Out!” is presenting an evening of original short plays, dances and poetry that are “thematically tied together by the idea that we regularly find ourselves in that liminal space between actions, that we are waiting for the next phase in life,” according to Bray. The original works, also directed by the students, ask, “What happens while we wait? What are our fears, expectations, and nightmares? What happens when we finally arrive? For now, it feels as if those bigger moments in life are still pending.”

The free performance is Wednesday, Oct. 2 at 8 p.m. in the Balcony Theatre (room 400) of the Fine Arts Building at UGA. For more information, contact jpbray@uga.edu.