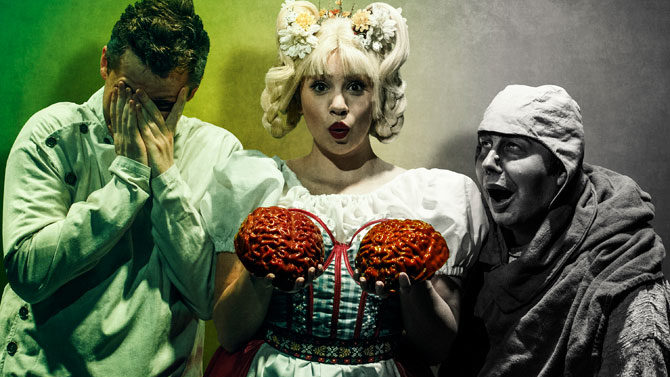 Young Frankenstein: If you’re not familiar with the classic Mel Brooks comedy from 1974, this isn’t the original story of Frankenstein, but of Frederick Frankenstein (Sean Birkett), the grandson of the infamous mad scientist. The film parodies both the various adaptations of the Mary Shelley novel and classic horror films in general, as the strait-laced, supposedly not mad Dr. Frankenstein travels with his patrician girlfriend (Emma Mathews) to Transylvania after inheriting the estate. After years of embarrassment over the family connection, he discovers his grandfather’s hidden laboratory, acquires a delightfully inept servant named Igor (John Galas) and a sexy assistant named Inga (Jordan Richey), meets the comically mysterious Frau Blücher (Lauren King), and soon creates a monster of his own (Zachary Tate)—with hilarious results.

The musical parodies it all, in over-the-top vaudevillian style with cartoonish comedy that should appeal to many, regardless of familiarity with the film—but fans of the film are welcome to shout out favorite lines (“He vaz my boyfriend!” or “Puttin’ on the ritz!”) during the show. Many in the audience—like many of the performers—will have never seen the movie, which some have criticized for bad taste and hints of misogyny. Yet the material, which also parodies such problematic tropes in early horror films and can be produced with an eye towards women’s agency, is in good hands with these students and director George Contini, whose past successes include Sweeney Todd and The 39 Steps—also a hilarious parody of a famous film—as well as co-director John Terry and choreographer Lisa Fusillo. You can expect top-notch performance and design with dazzling musical numbers and lots of laughs.

Ripcord: From The Odd Couple to What We Do in the Shadows, mismatched roommates have become a staple in American stage, screen and sitcoms. In Ripcord, curmudgeonly resident Abby (Linda Oulton) has achieved the nearly impossible through sheer force of will: driving away all possible roommates so she has a private room at the retirement home. She meets her match in an unflappably cheerful new roommate, Marilyn (Kelly McGlaun-Fields), who wants Abby’s room, even though another is available. They enter into an increasingly vicious wager: If Abby can ruffle Marilyn’s feathers enough to make her truly angry, she gets the room. If Marilyn can break Abby’s icy demeanor enough to make her truly afraid, she wins.
A series of stunts and pranks ensue, some simply funny and some downright mean, with both of their families getting dragged in to the insanity. Pulitzer Prize-winning playwright David Lindsey-Abaire is known for dark comedy, complex characters and morally gray areas, but this script is more comic than disturbing. Ben Brantley of The New York Times writes that Ripcord “only skims the bright surface of dark waters” and “churns up shadows only to dispel them with punch lines.” With director Leslie Kimbell focusing on the lighter comic side and a cast prepared to find the funny, this production should be more silly than sinister.
Ripcord, by Lindsey-Abaire, is presented by Town and Gown Players at the Athens Community Theatre Apr. 5–6 and Apr. 11–13 at 8 p.m., with 2 p.m. matinees on Apr. 7 and 14. Tickets are $12–$20 and available at townandgownplayers.org or 706-208-8696.

The Hunchback of Notre Dame: There’s a new ensemble in town: Athens Musical Theatre Orchestra, a performance program that is part of Athens Creative Theatre, giving community members of a variety of ages a chance to come together as singers or musicians to explore and perform pieces of musical theater. They are performing The Hunchback of Notre Dame, by Alan Menken, Stephen Schwartz and Peter Parnell, in concert format, featuring Victor Hugo’s Quasimodo, Esmeralda and the cast of gypsies and Parisians.

The Darker Side of the Rainbow: UGA theater major Rachel Simpson’s new play began as a compilation of poems, telling the story of queer college student Alexandra (Nosayaba Okungbowa), her art and her relationships. It’s this year’s winner of the New Georgia Grant, established by alumni of the UGA Department of Theatre and Film Studies, featuring UGA students Hannah Manning, Tjay Williams, Delaney Dunn, Kiana Washington and directed by Justin Hall.

The performances will be held Wednesday, Apr. 23 and Thursday, Apr. 24 in the Cellar Theatre of UGA’s Fine Arts Building. For more information, follow @darkersideoftherainbow on social media.

20,000 Leagues Under the Sea: UGA’s Children’s Theatre Troupe is performing an adaptation of the Jules Verne classic Apr. 16–17 in the Cellar Theatre. Follow @cttuga on social media for more information.